Velickovic, the art of motion

Humanity painted by Vladimir Velickovic is always running, as if to escape its destiny. 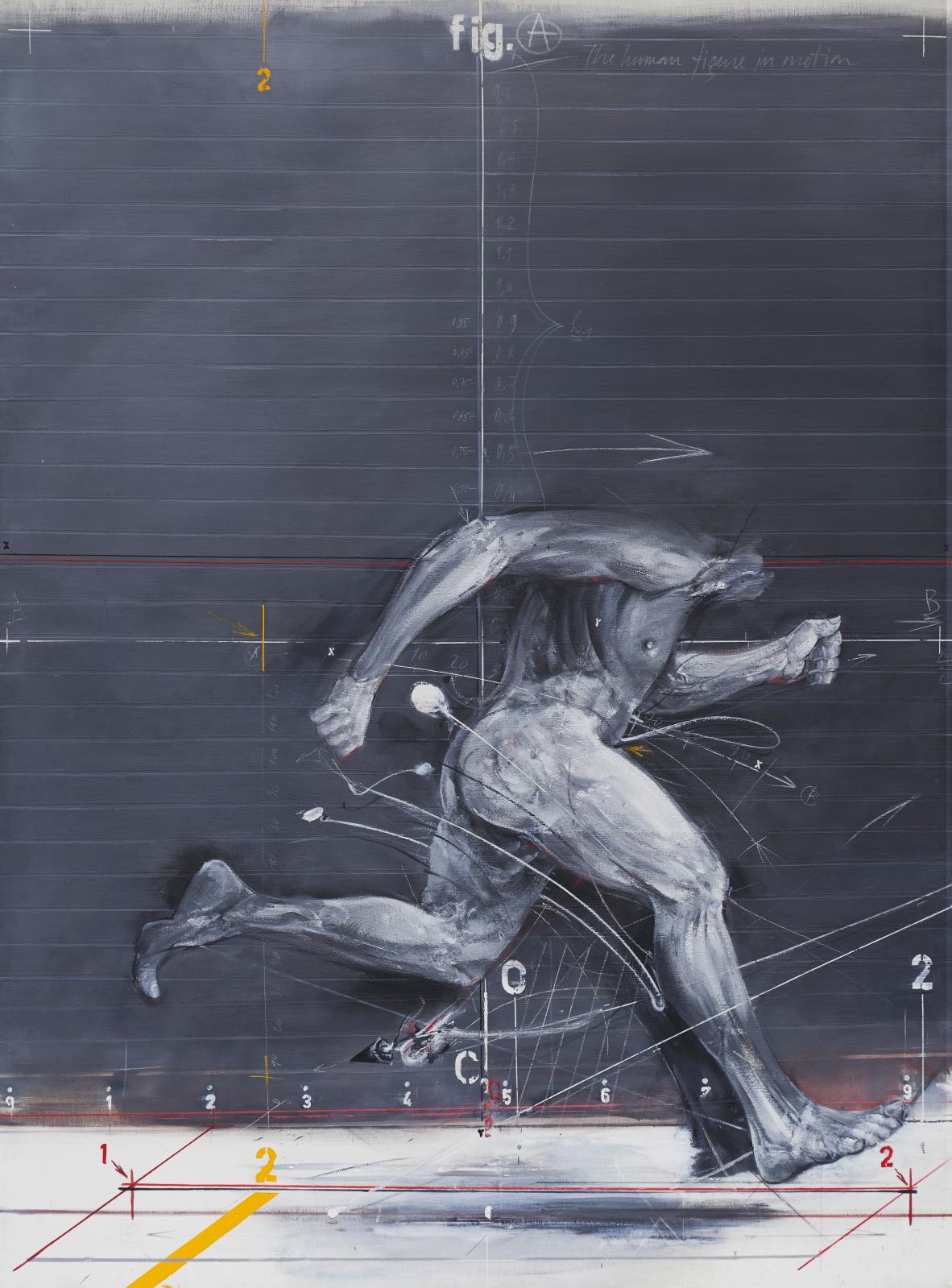 Man runs, but Vladimir Velickovic stopped the watch to better observe how his body moved. The human figure in motion, as it is written at the top of the first painting, keeps moving on two other panels, jumping and falling. The Yugoslav-born artist started exorcising the memory of the atrocities he witnessed during the Second World War at a very young age. From the very beginning in the 1960s, his works featured badly wounded or running people. In the 1970s, his animated bodies led him to take an interest in the breaking down of the movement of horses pioneered by the inventor of chronophotography, Étienne-Jules Marey, and Eadweard Muybridge. The latter’s work, published in 1887 in the collection Animal Locomotion, marked a turning point in the depiction of movement. Science may have caught up with painting, but art remains an interpretation of reality. "Photography has given me a lot of information about the body,” Velickovic said in a 1986 interview. “I've looked at medical books. Yet the accuracy of anatomy isn’t what I’m after, but its visual and graphic aspect". This triptych thus raises existential questions. Velickovic put his brushes down for good in 2019, but the vital energy that always ran through his work will remain. It will be exhibited at the Hélène & Édouard Leclerc Fund for Culture in Landerneau until 26 April.

[LIVE ONLINE ONLY] Post War & Contemporary Art
Salle 1 - Drouot-Richelieu - 9, rue Drouot - 75009
Millon
Info and sales conditions
Catalogue
Results
News feed
See all news
Members of Art Paris selection committee resign
Scanner reveals hidden secrets in Marie Antoinette's correspondence with her lover
Museums in Seoul, South Korea, are once again temporarily closed due to the coronavirus
Visionary artist Christo has died at his home in NY at the age of 84
Not to be missed
Pre-sale
From the monumental paintings of Carmontelle to a monumental…
Initially planned for Sunday, March 29, this sale will be offering…
Pre-sale
Captivating Book of Hours from the golden age of min…
Attributed to the Master of Luçon, this Book of Hours from the Beauvillain…
Pre-sale
Classics from Van Cleef & Arpels
The beauty of natural stones by Van Cleef & Arpels in a set from…
Pre-sale
Jewellery from the Janine Saladin Collection
Around ten pieces of jewellery by Suzanne Belperron owned by a trailblazer,…