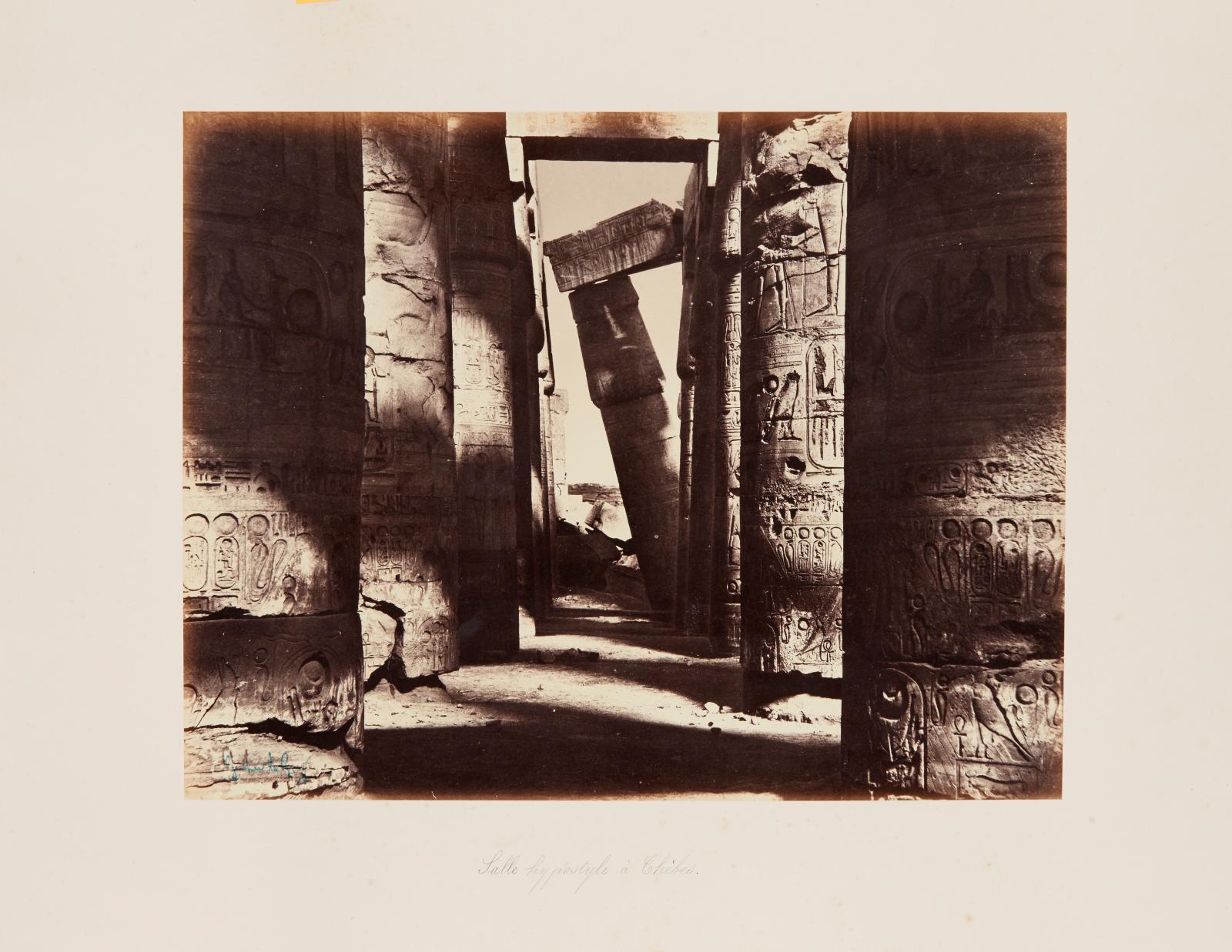 Following in the footsteps of Champollion (and anticipating Agatha Christie), Gustave Le Gray landed in the busy port of Alexandria in early 1861. At the time, he probably had no inkling that he would never return to France, where, incidentally, his creditors and possible ruin awaited him… Like the Orientalist painters Jean-Léon Gérôme and Théodore Frère (who became Frère Bey), he was so enchanted with the place that he remained there for over twenty years, despite many reproachful letters from his wife. In Cairo (where he settled  in 1864), his reputation preceded him and he became a foreign notable commissioned to officially photograph Ismael Pasha and accompany his expeditions in the Valley of the Nile and the Sudan desert. This is the story we discover through 71 photographs dating from the early years – when the king gave him official commissions, such as a post as drawing teacher to his sons – to 1867, when he was invited in January to travel along the Nile with the young crown princes. Le Gray then produced a splendid series of pictures, some of which were displayed at the Paris Universal Exhibition of 1867 in the Egyptian section. Here, following a recent discovery, the series is illustrated by 46 unpublished photographs, originally mounted in photo albums that have not survived. "A harvest of magnificent views worthy of his finest works during the glory days of the Empire," says the director of the BnF Prints and Photography Department, Sylvie Aubenas, while the expert Serge Plantureux is thrilled with "a crucial discovery that swells the relatively small body of Egyptian works." They show that the Nile already had a good deal of traffic, but that there were no roads around the Colossi of Memnon and the columns of the temple at Karnak had not yet been reassembled. Each photograph "was only decided after a mental process that involved appropriating a fragment of reality, when the composition and lighting were precisely right," says Sylvie Aubenas. Their sale, accompanied by reasonable estimates ranging from €1,500 to €9,000, is one of the highlights of the sales staged during Paris Photo.

photographies de Gustave Le Gray
Salle 6 - Drouot-Richelieu - 9, rue Drouot - 75009
Delon - Hoebanx
Info and sales conditions
Catalogue
Salerooms
Results
News feed
See all news
Paris Photo launches its New-York edition
First Donald Judd's US retrospective in over 30 years
Tefaf Museum Restoration Fund's grant goes to the V&A and LACMA
Resignation of the Uffizi's scientific committee
Not to be missed
Pre-sale
Robert Beauvillain: the love of illustrated books
A chance to savour the exquisite Hours, early printed works and…
Pre-sale
A radiant bull
The clearly-identifiable creature, accompanied by symbols, expresses…
Pre-sale
Watch out for these!
A Parisian collector assembled this set of thirteen timepieces over…
Pre-sale
Back to nature
Combining spontaneity and sophistication, this work by Léonard Foujita…