Famous for his portraits of English and Dutch nobility, the artist gradually faded into oblivion until a few years ago. This painting joins his body of works. 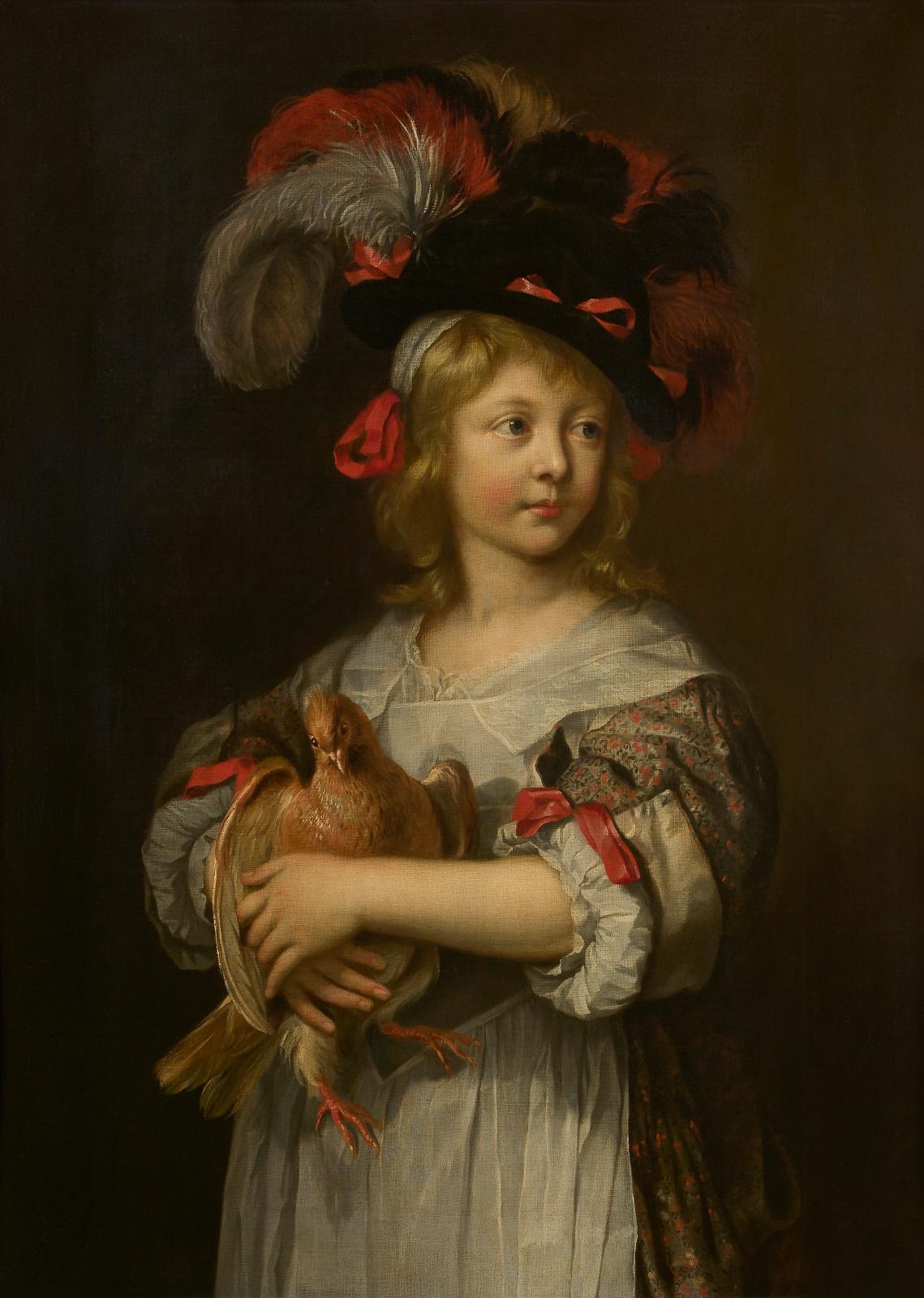 This young, nameless model elegantly wears a black hat with red, black and white feathers and red ribbons and an apron made of fine cloth. He is holding a bird that could be a chicken or a pigeon with caramel-coloured plumage. His frock, made of a fabric dotted with pink flowers, falls in heavy folds. Blond curls surround his face, which is turned towards a person outside the frame. He has a serious look, brightened up by the slightest hint of a smile. How could anyone resist! Hanneman pulled out all the stops in this portrait, from the harmonious palette to the transparent glaze, to attract our eyes and win over our hearts. At the height of his powers, in the 1650s he moved back to The Hague after having spent around 10 years in London, where he worked with Anton Van Dyck, whose style deeply influenced him. The painter acquired a reputation as a portraitist with the royal family and English nobility. He met some of them again after they fled to The Hague in the entourage of Mary Stuart, daughter of Charles I and wife of William of Orange, stathouder of the United Provinces. Hanneman was asked to lead the Guild of Saint Luke and became the first head of the Pictura Confraternity founded by dissident artists in 1656. One of the rules in their charter required its members to permanently display their works in the meeting room. The following decade was darkened by wars with England, France and several German princes, culminating in the Rampjaar, the year of the disaster. Patrician families were in no mood to have their portraits painted. Deprived of income, Hanneman was forced to sell off some of his property more than once. He died in 1671, leaving his prints and drawings to his student, Simon du Parcq. His reputation as a great portraitist has grown since the second half of the last century. This elegant painting shows why.

Once belonging to the famous Francis Cook collection, this recently restored painting reveals all the talent of a major Milanese Renaissance artist known to have been close to Leonardo da Vinci. 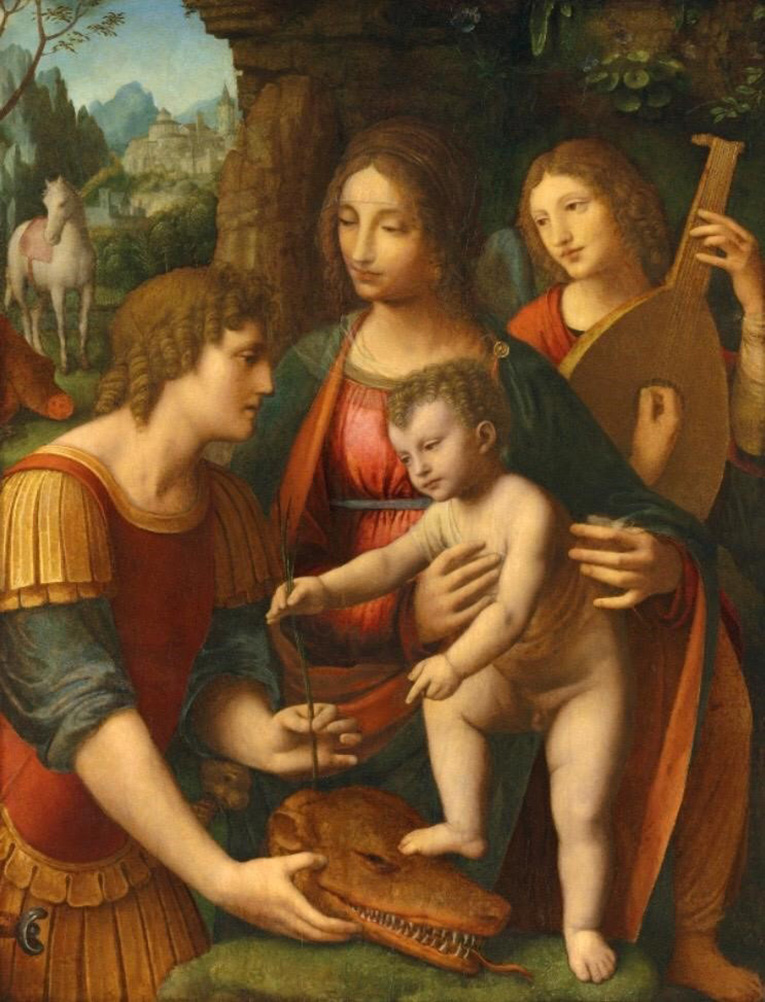 Bernardino Luini. You've probably heard the name, as he was recently involved in one of the most widely-publicised events in the art market: the Christie’s New York sale in November 2017 of the Salvator Mundi attributed to Leonardo, for the record sum of $450.3 M. This much-discussed work has been attributed to several artists, both recently and over a century ago, in 1900, when it joined the prestigious collection of Sir Francis Cook (1817-1901), the head of a British textile firm and an insatiable Old Master lover. It was no accident that on entering Doughty House, Richmond, the Salvator Mundi met up with this Virgin and Child with St George and an angel by Bernardino Luini. In 1913, Herbert Cook (1868-1939), co-founder of the Burlington Magazine, published a partial catalogue of his grandfather's collection in which he devoted a whole double-page to this painting, then hanging in the Long Gallery alongside works by masters like Fra Angelico, Sandro Botticelli, Velasquez and Rembrandt. "This major, highly influential artist was at the heart of 16th century European art and science," says Grégoire Lacroix of the Aguttes auction house, adding: "There aren't many painters who have five works in the Louvre!"

Critical restoration work
This painting by Luini remained in the collection until 6 July 2017, when Sir Francis's descendant, Lady Cook, decided to sell it with Christie's London. A fortunate German collector bought it for a… reasonable sum. Intrigued, he called on Aguttes to come and examine his acquisition. This was right in the middle of the Salvator Mundi affair, and a "Leonardo da Vinci" exhibition had just been announced for late October 2019 at the Musée du Louvre. An enormous amount of interest then grew around the painting, and it was decided to restore it. Nicolas Villard had the weighty task of removing the previous restoration work, which included clumsy overpainting and a yellow varnish (designed to mask unevenness in the wood) which had altered the colours. The result was striking. The curator of the Cook collection, John Somerville, was incidentally the first to admire the achievement: "It's a revelation: it's one of Bernardino Luini's masterpieces<\!s>[…] It was exactly what I had recommended to Lady Cook, as it had previously been hard to assess this painting because of the overpainting and varnish."
On the strength of not only this restoration but also the new light cast on this worthy successor to Leonardo, it was decided to send the painting to auction again, this time in Paris: the city where Luini's record was recently set (27 November 2018, Christie's, source: Artnet) with the €1,207,500 fetched by a small panel, 40 x 30 cm, of the Head and shoulders of a saint with a palm reading the Scriptures. The market thus acclaims an artist who had remained in obscurity for many centuries – mainly due to Vasari, who spelt his name wrong in his Lives, calling him "di Lupino".

> Virgin and Child with an angel, known as the Menaggio Madonna, and The Virgin holding the sleeping infant Jesus, with St John and two angels, Musée du Louvre, Paris

> Virgin and Child with St John the Baptist, Thyssen-Bornemisza Museum, Madrid
OLD MASTERS DRAWINGS & PAINTINGS
Salle 6 - Drouot-Richelieu - 9, rue Drouot - 75009
Aguttes
Info and sales conditions
Catalogue
Salerooms
Results
News feed
See all news
The city of Paris announces financial boost for the culture sector
The UK’s largest arts and cultural organization might not open until April 2021
Hong Kong gallery association creates art fair to help reinvigorate art market
Artist Emma Amos has died at age 83
Not to be missed
Pre-sale
Vincent Lécuyer Collection
The Paris gallery owner, who died in July 2019, left a group of…
Pre-sale
A peerless pair
Although these commodes were produced at different times, they make…
Pre-sale
Iconic cars
Rarities including a collection of Packards and a Lamborghini "supercar"…
Pre-sale
Lagerfeld by himself
Karl Lagerfeld died on February 19, 2019, leaving behind a legacy as an…