The Louis XIV and the virtuoso engraver 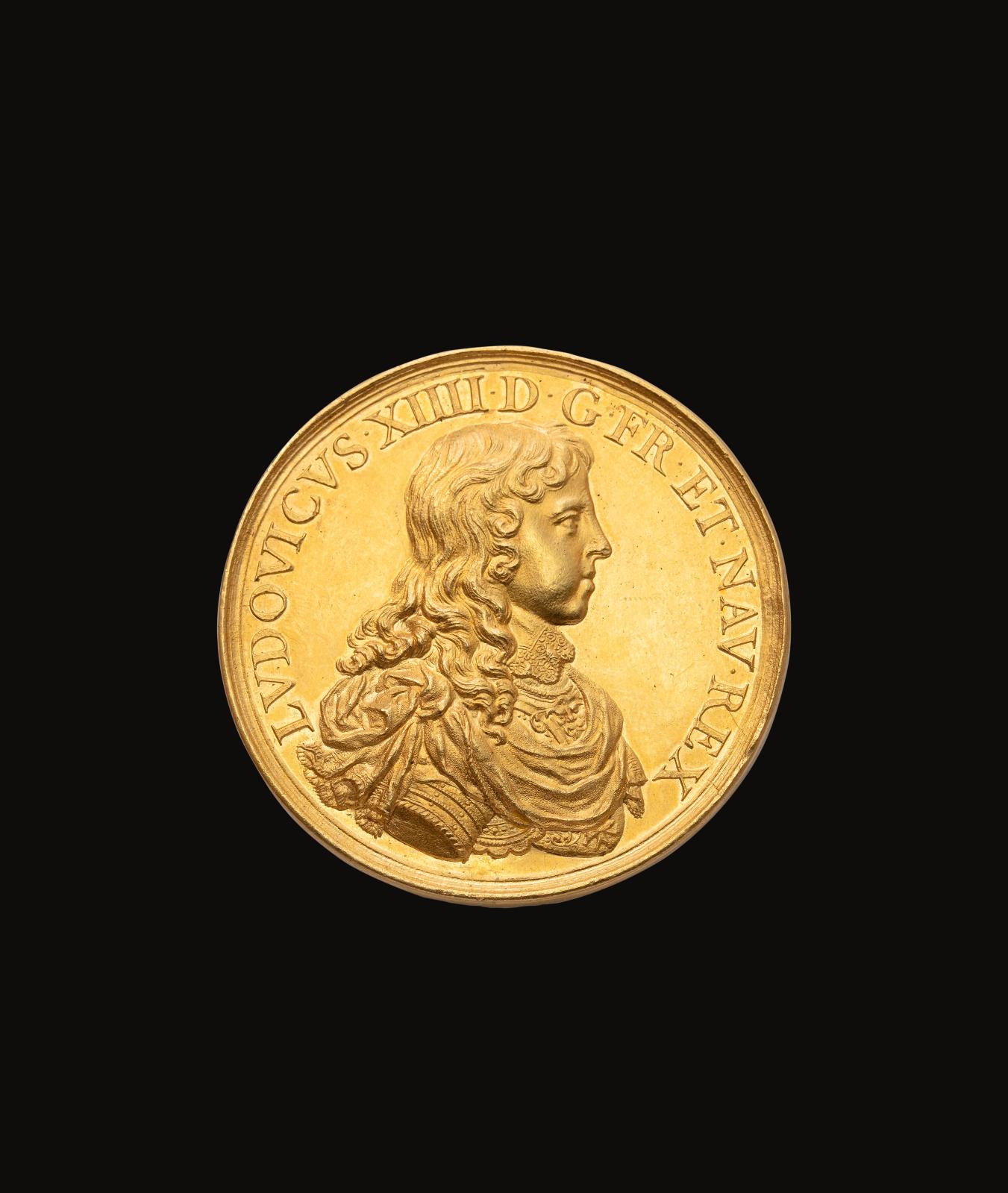 This chubby child's face is that of a future great monarch, Louis XIV (1643-1715), here aged only five. He was born of the alliance of two of Europe's leading dynasties at the time: the Bourbons and the Habsburgs. In 1643, the year in which this spectacular gold medallion was struck (92.96 g; diameter 50.9 mm), the little Dauphin became king a few months after the death of his father, Louis XIII. Because he was so young, a regency council was set up, consisting of the Queen, Anne of Austria, the king's uncle, Gaston, Duc d'Orléans, and Cardinal Mazarin. To celebrate his accession, the traditional medallion was created to mark this power as yet under guardianship. On the obverse, the boy king is already shown as a war leader, in armor and drapery, with the Cross of the Order of the Holy Spirit, while the other side features a veiled, draped bust of his mother. It was commissioned from Jean Varin (1604-1672), and though this masterpiece is unsigned its creator is evident from its refinement and attention to detail. As we know, the Liege-born sculptor, one of the most illustrious medallists of the 17th century, shot to fame rapidly. He moved to Paris in around 1626, and soon attracted the eye of Louis XIII and Richelieu after executing their busts. He became close to the young Louis XIV, and from 1647 until his death he held the post of Engraver General of the French Mint. The medallion here played a specific role, as a gift presented to the young king's entourage and a few foreign monarchs. Bought from the prestigious Ratto company in Paris on September 23, 1948, the piece could then be established as an "emblem of rarity and beauty", having escaped the drastic melt-down program affecting this type of royal product from the 1680s onwards. It is all the more desirable, as emphasized by leading specialist Fernand Mazerolle (Jean Varin, 1932), as even the Bibliothèque National de France's Medallion department does not possess the gold version…

Numismatics: an exceptional collection of coins and gold medals of prestigious origins.
Salle 16 - Drouot-Richelieu - 9, rue Drouot - 75009
Christophe Joron Derem
Info and sales conditions
Catalogue
Salerooms
Results
Newsfeed
See all news
Due to the summer holidays there will be a pause in the newsfeed. We will be back Monday, August 24th. Have a wonderful summer vacation!
Met Museum in New York acquires Wangechi Mutu sculptures
US House of Representatives vote to create a national museum dedicated to Latin Americans
Church volunteer confesses to starting the Nantes Cathedral fire
Not to be missed
Pre-sale
Figurative art from van Goyen to Combas and the inescapable…
This 1955 work by Bernard Buffet belongs to a series of around 10…
Pre-sale
Henri Lebasque, painting the zest for life
His soft, nuanced palette captures moments of simple happiness on…
Pre-sale
The Gilles Labrosse collection: fashion throughout the…
Amassed by an impassioned enthusiast, one of the largest private…
Pre-sale
Achille Laugé: Cailhau in perspective
Found during an inventory carried out for an estate in the Var,…