In Brandenburg, indecision on religion

Struck in 1627 under George-William, elector of Brandenburg, this rare five-ducat gold coin recalls power struggles during the Thirty Years’ War. 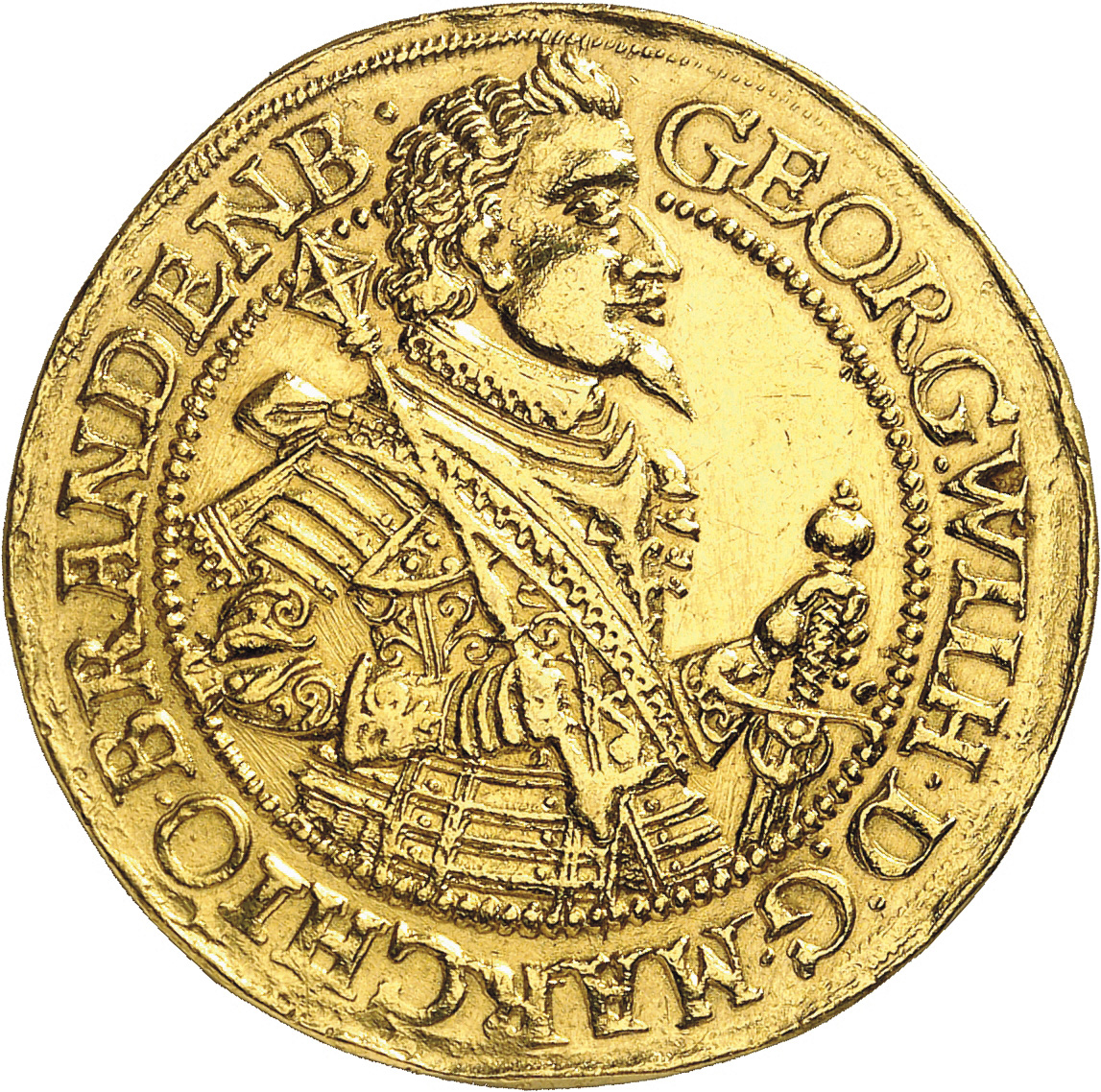 This extremely rare five-ducat coin dated 1627 is only the second known example of its kind. It immerses us into a dark chapter in European history in which the man whose profile is engraved here, George-William, elector of Brandenburg, took part: the Thirty Years’ War. The son of John Sigismund, Margrave of Brandenburg and Anna of Prussia, and a member of the House of Hohenzollern, he was the elector of Brandenburg and the duke of Prussia from 1619, when the electorate inherited the duchy, to 1640. His marriage to the daughter of the elector Palatine strengthened his authority within the Empire, but his weakness and clumsiness ended up leaving an irrevocably weakened Brandenburg to his son and successor, Frederick-William. The cause: his governance errors during the 1618-1648 Thirty Years’ War between the Catholic Habsburgs, backed by the papacy, and the Holy Roman Empire’s Protestant German States, allied with the United Provinces, the Scandinavian countries and France. The indecisive Protestant George-William switched sides, influenced to the point of blindness by the Catholic Count Adam von Schwarzenberg, who even swayed his superior’s political decisions in his favour. This capricious policy caused the duke’s downfall. After the war, seeing his territory decimated, he fled to Prussia in a sort of exile.

monnaies
Berlin - Sonnenallee 225 - 12085
Künker
Info and sales conditions
News feed
See all news
Original Flash Gordon comic strip to be auctioned in LA
A masterpiece by Sanyu to be auctioned at Drouot
Donation rebuke for the Los Angeles County Museum of Art
Da Vinci exhibition breaks Louvre record with 1.1 million visitors
Not to be missed
Pre-sale
Watch out for these!
A Parisian collector assembled this set of thirteen timepieces over…
Pre-sale
Back to nature
Combining spontaneity and sophistication, this work by Léonard Foujita…
Pre-sale
A snuffbox from the Empress Josephine
Given to the Comte de Barral by the Empress, this snuffbox promises…
Pre-sale
Botanical precision
An orchid brooch in gold and enamel from Tiffany & Co, late 19 th…