A snuffbox from the Empress Josephine

Given to the Comte de Barral by the Empress, this snuffbox promises to be the most sought-after in a collection of gold boxes. 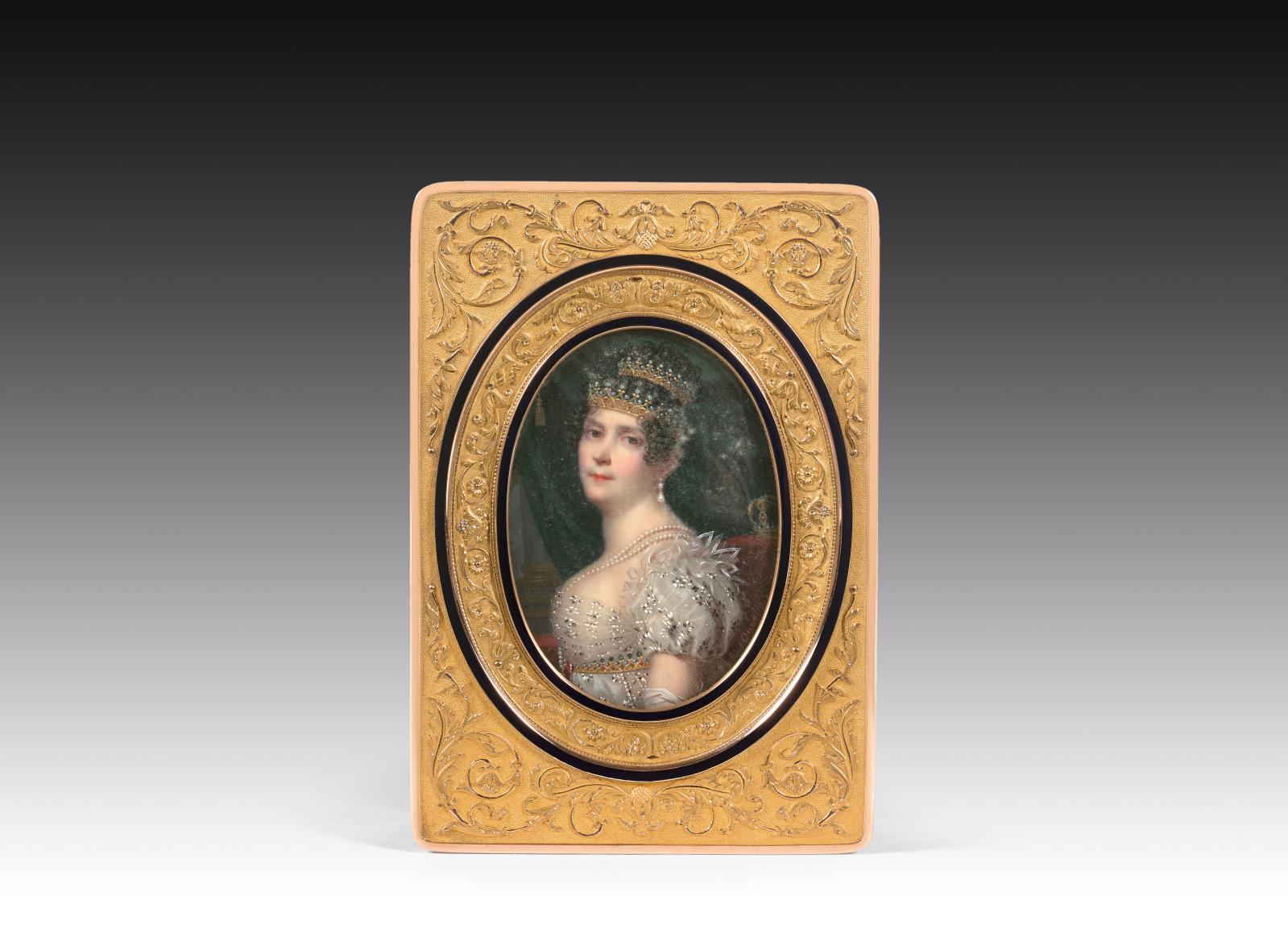 A brilliant victory deserves a lavish present... This one, entirely in chased gold set off by two blue enamel fillets, sports a portrait of the Empress. It may have been a gift from Napoleon or bought by Josephine, an avid collector who spent a substantial amount on jewellery, despite having the use of the crown jewels. Her collection included diamond and cameo tiaras, emerald and amethyst sets and earrings in pearls or sapphires, which she bought from Mellerio and Nitot, the Emperor's official supplier (now known as Chaumet). The artist behind this miniature was Paul Louis Quaglia (1780-1853), who was born in Piacenza, Italy, and moved to Paris in 1805. This snuffbox in gold chased with foliage bears the hallmark (his initials and an ear in a lozenge) of Gabriel-Raoul Morel (1764-1832), who specialised in producing gold boxes for leading jewellers. In the early 19th century, Napoleon I's coronation relaunched a taste for snuffboxes, and the official gift department revived the customs of the former court, which involved making presents of these objects decorated with the sovereigns' portraits. A little later, these exquisite boxes were used as gifts for members of the imperial family, as rewards for princes and marshals, or to commemorate a major event. They were presented in gilded leather cases, like the one here. Josephine gave this snuffbox to one of her cousins, Amédée François Joseph Hippolyte, Count of Barral (1787-1856), to celebrate the victory at Austerlitz. A masterpiece of military strategy, this battle took place on 2 December 1805: the first anniversary of Napoleon I's coronation.

Combining spontaneity and sophistication, this work by Léonard Foujita reflects his love for the worlds of childhood and nature. 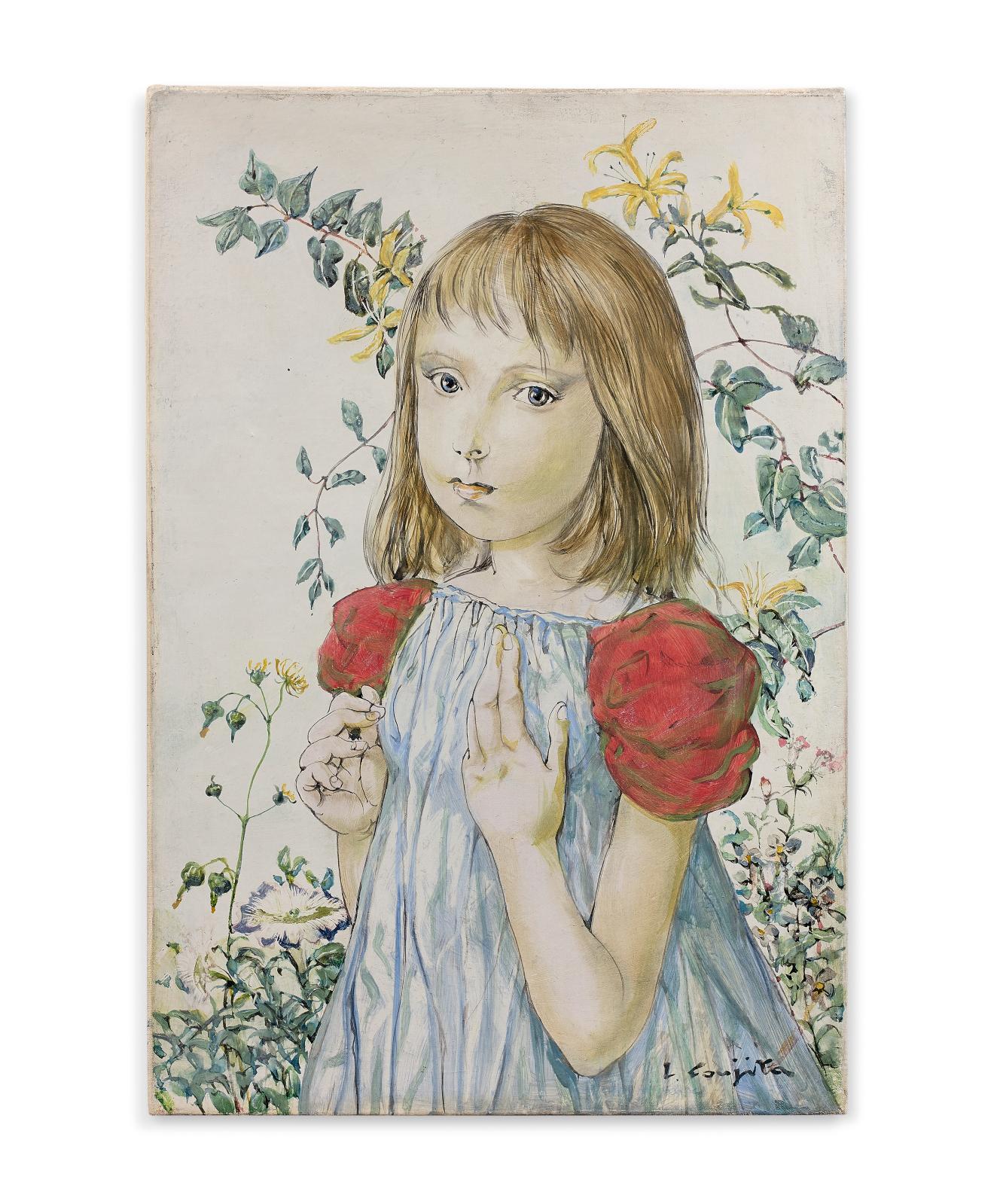 If there is one artist whose prices have not been affected by the crisis, it is Foujita. The large white nudes and Madonnas standing out against a golden background regularly break records, but our painting is appealing for its small dimensions and, above all, the dainty little girl caught by surprise amidst flowers. Foujita held the Impressionists in high regard and was steeped in Western painting and culture, especially that of the Renaissance. Born into a samurai family in Japan, he arrived in Paris in 1913 and soon became an eccentric figure in bohemian Montparnasse. After travelling to South America and Japan, he returned to France. In 1961, he settled in the countryside near Villiers-le-Bâcle and shared an idyllic old age with his Japanese companion in contact with nature. When he converted to Catholicism in October 1959, he took the first name Léonard in honour of the Italian master. Our painting, signed "l.Foujita", was made in the early 1960s.

MODERN PAINTINGS AND SCULPTURES - JEWELRY FROM A JEWEL CASE - COLLECTION OF GOLD BOXES AND WATCHES FROM THE 18TH AND 19TH CENTURIES - CERAMICS - ASIAN ART AND HIGH CURIOSITY FROM THE 18TH TO THE 18TH CENTURY - OBJETS D'ART AND VERY BEAUTIFUL FURNISHINGS MAINLY FROM THE 18TH CENTURY - CARPETS - TAPESTRIES
Salle 13 - Drouot-Richelieu - 9, rue Drouot - 75009
Fraysse & Associés
Info and sales conditions
Catalogue
Salerooms
Results
Newsfeed
See all news
Salisbury Cathedral reopens today with art exhibition
Image 3.0: Results of the French National Photographic Commission 2020-2021
Discovery of an early-Christian necropolis in Autun
Floriane de Saint Pierre to head the Society of Friends of the Centre Pompidou
Not to be missed
Pre-sale
Seeing de Staël
This 1949 painting highlights a beautiful chapter in the fruitful…
Pre-sale
Calder and the female subject
Women are in the limelight at this modern art sale, where a carved…
Pre-sale
The Louis XIV and the virtuoso engraver
The meeting between the young Louis XIV and the sculptor Jean Varin…
Pre-sale
Superb tapestries from the Tchaloyan collection
Over fifty pictures in wool and silk dating from the 15 th to the…