The clearly-identifiable creature, accompanied by symbols, expresses Le Corbusier's architectural system on paper. A "secret labour" soon to be unveiled. 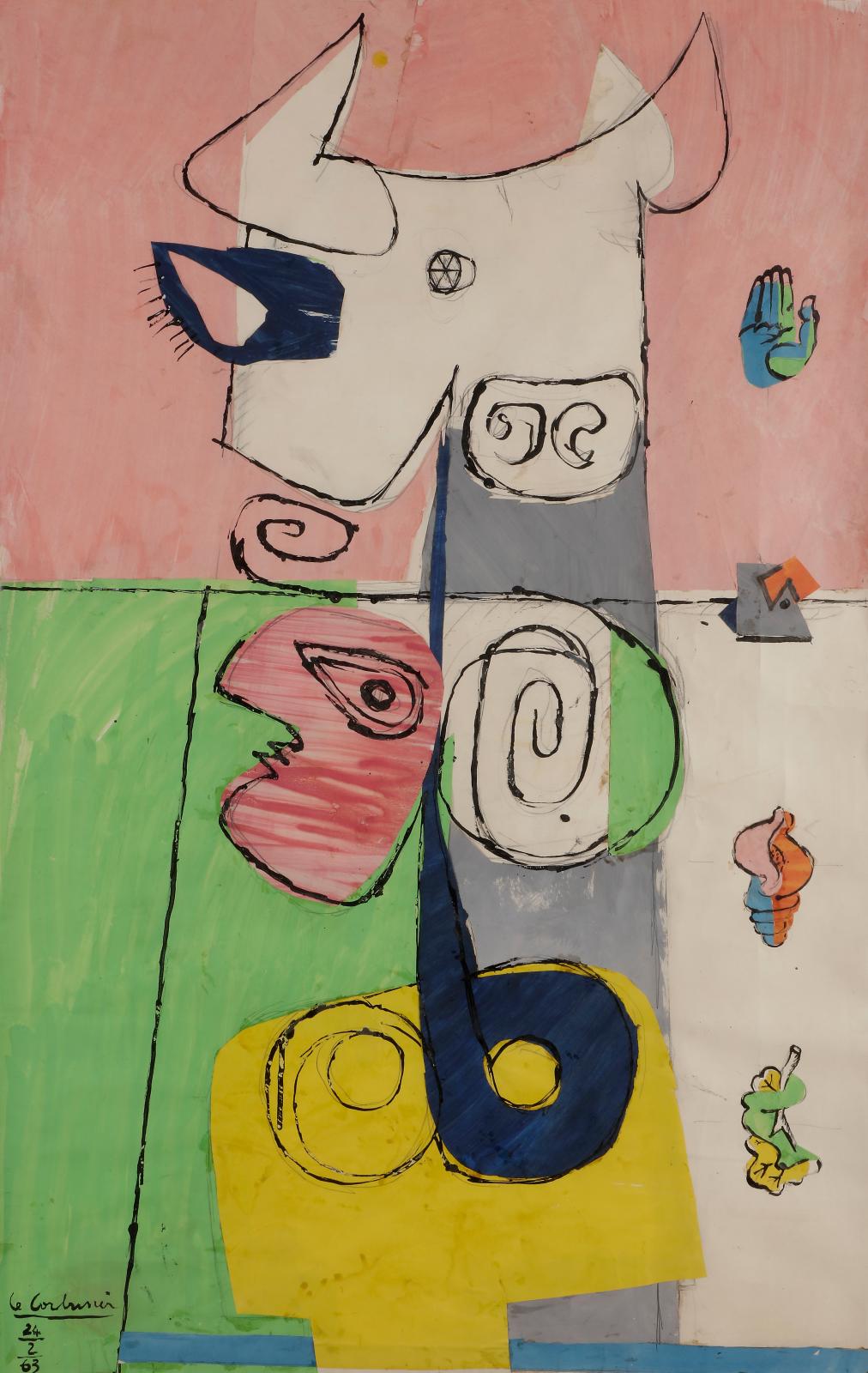 "Creating architecture is/makes a creature," he wrote in Poème de l'angle droit, in 1955. The world knows Le Corbusier, born Charles-Édouard Jeanneret in 1887, as the "father of modern architecture". But in the secrecy of the "workshop of patient searching", as he put it, the architect always felt the flame of the visual artist burning within him and devoted half his day to this "secret labour". He was guided on this path in his early years by his friend and mentor Amédée Ozenfant (1886-1966). In 1918, they founded an artistic movement together: Purism, aimed at going beyond Cubism and returning to a classical order with frontal compositions. From then on Le Corbusier painted ceaselessly, even during the intense architectural turmoil of the 1930s. In 1952, he developed an interest in the bull. As he said, "For twenty years, I have been intuitively leading my figures towards animal forms that foster character," and later described how the idea came to him by chance, when he saw, at 90 degrees, an old Purist drawing that had fallen on the floor. The bull appears as the very symbol of Le Corbusier's cosmogony. He created eighteen different subjects based on this theme, materialised by nineteen large oils and a huge embroidered tapestry, which became the stage curtain for the Bunka Kaikan Theatre in Tokyo. There is also this collage of 1963. At that time, he often experimented with colours when working on a monumental work.

MODERN DRAWINGS
Salle des ventes Favart - 3, rue Favart - 75002
Ader
Info and sales conditions
Catalogue
Results
Newsfeed
See all news
Due to the summer holidays there will be a pause in the newsfeed. We will be back Monday, August 24th. Have a wonderful summer vacation!
Met Museum in New York acquires Wangechi Mutu sculptures
US House of Representatives vote to create a national museum dedicated to Latin Americans
Church volunteer confesses to starting the Nantes Cathedral fire
Not to be missed
Pre-sale
Figurative art from van Goyen to Combas and the inescapable…
This 1955 work by Bernard Buffet belongs to a series of around 10…
Pre-sale
Henri Lebasque, painting the zest for life
His soft, nuanced palette captures moments of simple happiness on…
Pre-sale
The Gilles Labrosse collection: fashion throughout the…
Amassed by an impassioned enthusiast, one of the largest private…
Pre-sale
Achille Laugé: Cailhau in perspective
Found during an inventory carried out for an estate in the Var,…