This joyous composition is a teeming scene in the toned-down blues and greens typical of Jean Dufy's art, worthy of his brother Raoul. 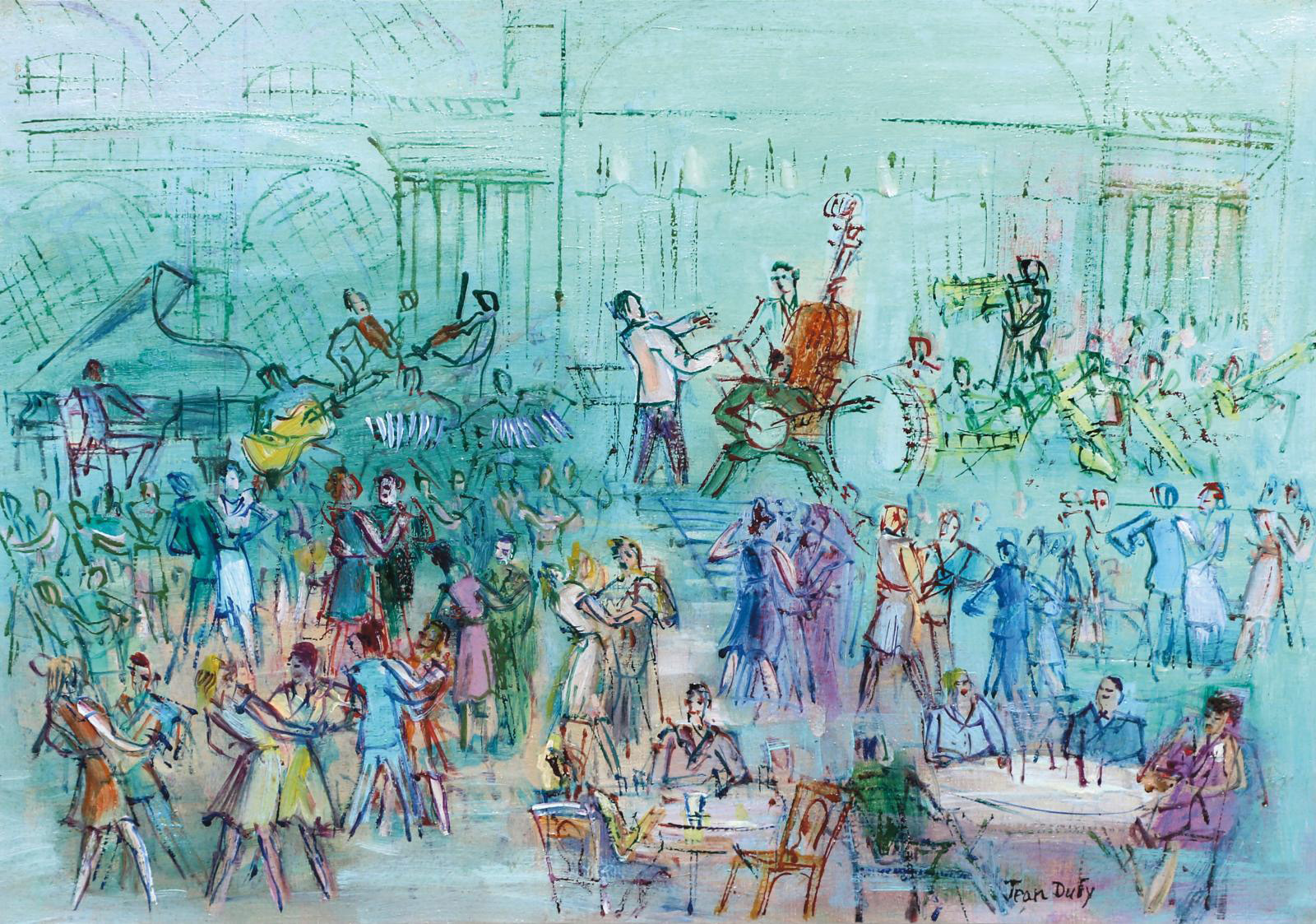 Some guests are seated at a table, while others dance or play music. When his paint pirouetted on the canvas to the rhythm of musical notes, Jean Dufy was in his element as an artist. And with the Dufys, music was a family affair! The father, Léon Marius, an accountant in a metalworking company, was also an amateur musician. Raoul sometimes accompanied the church choir on the organ, while the more musically gifted brothers, Léon and Gaston, were respectively a piano teacher and a composer and flute player. For the painters in the family, Jean and Raoul, music was naturally one of their favourite themes, and this vibrant scene conveys the whirlwind pace of the many Parisian cabarets Jean Dufy visited after his arrival in the capital in 1912. The seventh of eleven siblings, he began drawing assiduously as a child. Later, he followed the example of his elder brother Raoul, who pointed him towards art in 1906 at an exhibition staged with his Fauvist friends Othon Friesz and Georges Braque at the Le Havre town hall. After his military service in 1910-1911, Jean moved to Paris. At first, he worked with muted colours, using the hatching technique he had learned from Cezanne; then, after the war, he collaborated with Raoul in a textile painting studio. Guided by light and colour, he developed his own interpretation of his brother's style, gradually freeing colour from a drawing technique characterised by abundant black lines, and letting his paint thrill to a joyful strain.

Modern Art
Cannes - 20, rue Jean-Jaurès - 06400
Cannes Enchères
Info and sales conditions
Catalogue
Newsfeed
See all news
Dutch Monument to Those Murdered by the Nazi Regime Opens – But Also Meets Opposition
Giant Violin Floats Down Venice’s Grand Canal
Picasso Exhibition to Finally Open in Toronto in Early October
Liste Art Fair Basel Kicks Off Today
Not to be missed
Pre-sale
Sisley at the Height of His Maturity
Alfred Sisley trained in Swiss painter Charles Gleyre’s studio alongside…
Pre-sale
Bon Boullogne’s Painting of Pan Headlines the Sale
Bon Boullogne, a son and brother of artists, made this large painting…
Pre-sale
Childhood Personified by Camille Claudel
Camille Claudel made this emotional portrait just after losing her…
Pre-sale
This Precious Snuffbox Is Nothing to Sneeze At
This gold box inlaid with mother-of-pearl highlighting chinoiseries…