The Gilles Labrosse collection: fashion throughout the ages

Amassed by an impassioned enthusiast, one of the largest private French fashion collections will soon be rousing the desires of other connoisseurs – especially since some of its key pieces have already appeared in memorable exhibitions. 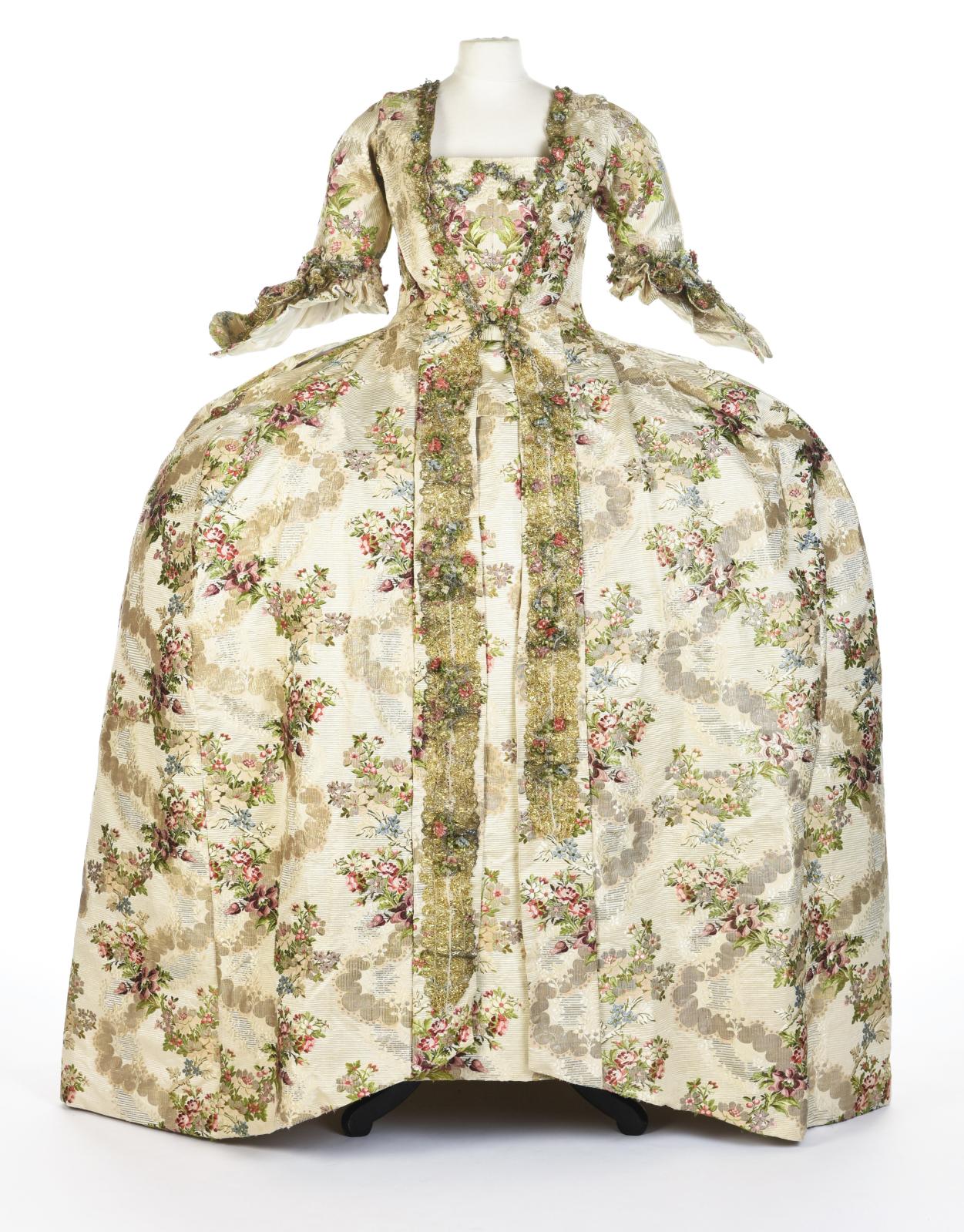 For over four decades, the collector Gilles Labrosse (1952-2019) crisscrossed France, combing auction rooms, flea markets in Paris and second-hand shops in the south in search of the clothing and accessories he adored from times gone by. A professional photographer, he was assisted in his quest by his partner Éric Girardon, a teacher. Their pieces, some extremely rare and mostly from France, were on show to the public in the museum they created in their house arranged in period rooms. Over the past few years, Gilles Labrosse generously lent some of his treasures to unforgettable exhibitions like "Sous l’empire des crinolines" (Under the Crinoline Empire) at the Palais Galliera in 2009, and "L’impressionnisme et la mode"(Impressionism and Fashion), at the Musée d’Orsay in 2012, which also went to New York and Chicago.

Court dresses and Indian cotton dresses
The collector's taste for the remarkable found a perfect outlet in 18th-century fashion, illustrated in all its variety in an extensive group of garments. The most spectacular is a ceremonial French-style court dress dating from 1770-1780 in excellent condition, with "Watteau" or loose box pleats along the back forming a mantle and train. This looks set to fetch €12,000/15,000. A more informal dress from the same period is made of Indian cotton, or chintz, printed with flower garlands (€5,000/7,000). Both need some heeled shoes to go with them, such as there is a lot with two pairs in fabric that will cost €2,500/4,000.
With men's fashion, at €1,500/2,500 we start with a long coat and waistcoat, or jerkin, dating from 1700-1720. An exquisite three-piece court suit in celadon green embroidered satin, from around 1780, can be donned for €4,000/6,000. At the same price, you could try on one of several "banyans" (men's loose indoor gowns) from the collection.

A constantly renewed silhouette
The 19th century began under the auspices of Antiquity, which inspired the high-waisted light tunics of the Directoire and Empire. Here we find a perfect example in a ball gown made between 1810 and 1815, in embroidered cream silk dotted with small flowers (€2,000/3,000). With Romanticism, silhouettes began to take on forms inspired by the Renaissance, as witness a dress of c. 1835 with typical large leg-of-mutton sleeves (€1,500/2,000). Then began a long period when bell-shaped skirts gained increasingly in volume with the invention of the crinoline. Worn everywhere by 1860, this light cage of metal hoops held with tape reached its maximum breadth in around 1863, with a diameter of over 150 cm, 4.9 ft. "This extravagant fashion, synonymous with the sumptuousness of the Second Empire, was Gilles Labrosse and Éric Girardon's favorite," says Serge Liagre, their friend and the consultant for the sale. This is illustrated by a magnificent ball dress from between 1862 and 1865, with an estimate of €1,200 to 1,600.
After 1869, another craze came to the fore, instigated by the first great couturier, Charles-Frédéric Worth: bustles and "false rumps", which provided volume at the back. In 1885, the ultimate length was achieved with the "strapontin", which can be seen in a day dress (€900/1,200). The historicist movement influencing all the arts of that time also spread to fashion, especially with Worth, which produced a Louis XIII inspired Ottoman-style reception dress in around 1895 (€3,000/4,000).

The gradual liberation of women's bodies
It took until the early 20th century for the female figure to re-emerge, with an "S" line and volumes following the line of the body more closely – but which were equally artificial! Corseted, restrained and topped with outsized hats, in the end, women were only liberated by Paul Poiret, who in 1906 decided to toss the corset out of the window before establishing the high Empire-style waist. An amazing pink satin evening burnous silk cape from around 1915, in his style but with no label, evokes the ground-breaking couturier's imagination at €500 to €1,000. We also find Mariano Fortuny, who promoted a return to the Greek line, represented here by a fine example of his legendary 1907 "Delphos" tunic (€3,000/4,000).
The hour of liberation finally struck with the dawn of the Twenties, with tubular cuts and low or non-existent waists. In around 1921, Madeleine Vionnet, a marvelous designer, dreamed up a "little black horse" evening dress. In silk crepe almost entirely embroidered with beads, this is embellished with a frieze of horses, and looks set to garner €8,000/12,000. Dating from the same period, there is also an admirable haute couture Poiret dress (numbered 40330) in beads embroidered with rose motifs in the style of Raoul Dufy (€10,000/12,000). Meanwhile, Coco Chanel put the accent on the practical side of clothing, now adapted to open-air activities, as witness a silk beach dress of around 1925-1930, which can be attributed to her (€600/1,000).

The reign of glamorous haute couture
"In the early 2000s, Gilles Labrosse began to take an interest in the haute couture of the 1950s, probably because he liked its architectural aspect," says Serge Liagre. Christian Dior once more corseted women and dressed them in big skirts… His signature "New Look" is illustrated here with a glamorous evening dress from between 1950 and 1955 (numbered 363404), with six tulle petticoats, available for €4,000/6,000. The same period and estimate apply to another ball gown, this time by Pierre Balmain (numbered 87681) embroidered with a baroque decoration. Very different from these whalebone constructions, the Antique-style straight line persisted with the Madame Grès label; an evening outfit in white silk jersey is attributed to her because of its virtuosic asymmetrical pleat work (plan for €2,000/€3,000). These very different concepts still had the same goal: to glorify the female body!

Sales on Tuesday 22 & Wednesday  23 September, espace Villars, rue du Pont-Chinard, 03000 Moulins.
Public exhibition: Saturday 12 to Monday 21 September, then on the mornings of the sales.
Enchères Sadde OVV, en partenariat avec Maison de ventes Richard OVV.
mode
Moulins - espace Villars, rue du Pont-Chinard - 03000
Enchères Sadde
Info and sales conditions
Newsfeed
See all news
The Frac Picardie d'Amiens reopens its doors on November 12th
Rare ‘My Generation’ album by The Who sells for seven times auction estimate
Chicago non-profit 3Arts announces Next Level/Spare Room Award winners
King for a day? Man breaks into the Chateau of Versailles
Not to be missed
Pre-sale
The collection of Georges Heilbrun: a joyous and erudite…
This outstanding bookseller made his mark on the bibliophile world…
Pre-sale
Legendary Sissi, Empress of Austria and Queen of Hun…
Mementos of the Empress of Austria and Queen of Hungary look set…
Pre-sale
The 18th-century desk of Count of Asalto, Francisco González…
With its delicate neoclassical landscape marquetry, this piece is…
Pre-sale
Lazing around with Cubist artist André Lhote
This very late painting is the crowning achievement of the Cubist…