Two pieces of furniture, a Mazarin desk and a chest of drawers, illustrate the work of cabinetmaker Nicolas Sageot (1666-1731) and his famous decorations with original motifs: in this case, dancers and guitarists. 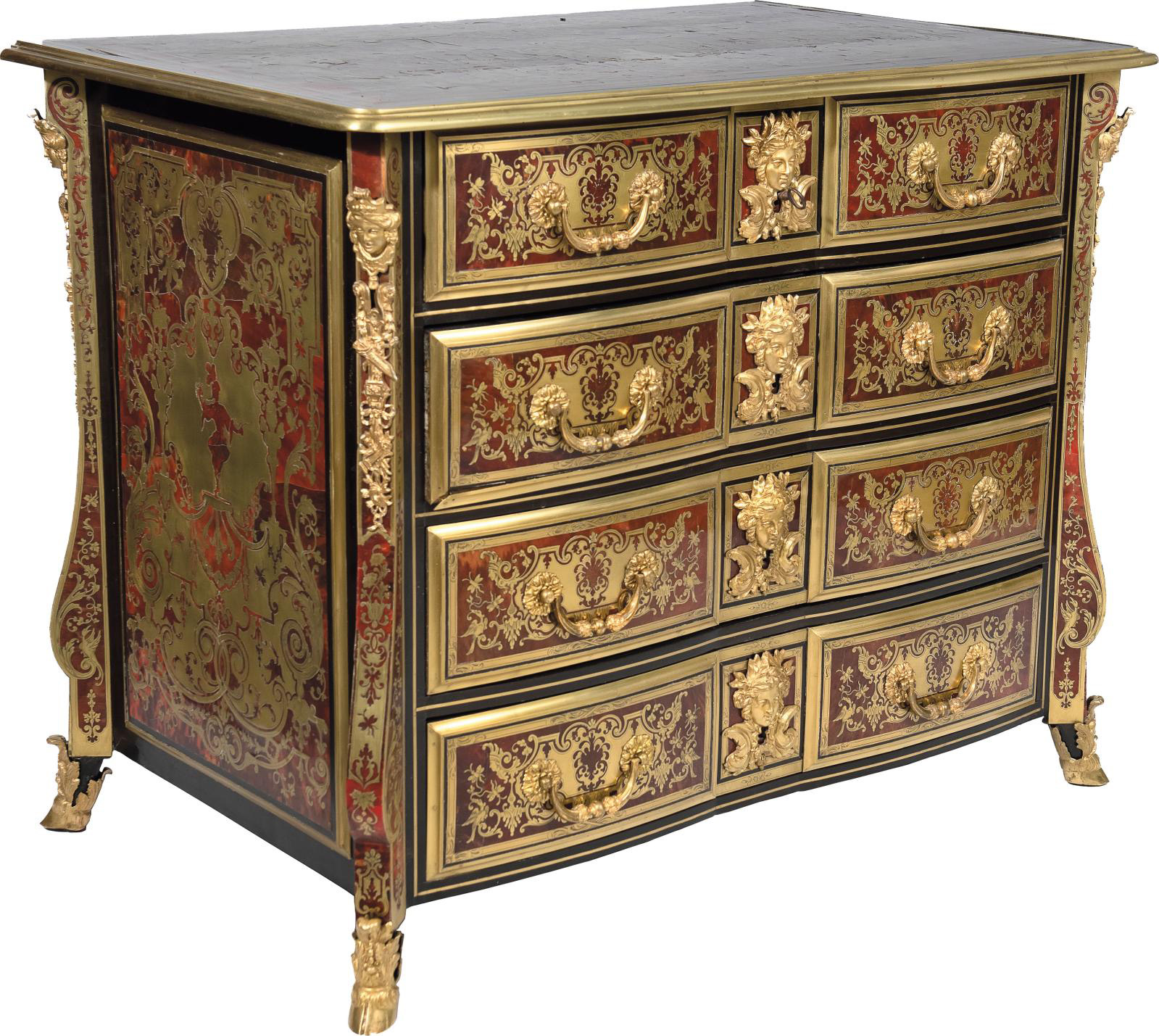 While André-Charles Boulle (1642-1732) brought metal marquetry to the peak of achievement under Louis XIV with the introduction of the première-partie et contre-partie (part and counterpart) marquetry technique (producing two complementary pieces of furniture by cutting superimposed sheets of brass and tortoiseshell), Nicolas Sageot was his worthy heir. A master cabinetmaker in Paris by 1706, he ran a workshop on the prominent Rue Faubourg Saint-Antoine, specializing in metal marquetry for Mazarin desks and chests of drawers, like the two pieces on sale here. This astonishingly rich inlaid decoration skillfully blends première partie and contre-partie in a mix of brass and tortoiseshell motifs. The top features a mother-of-pearl guitar player engraved in a cartouche in the center amidst an exquisite composition of foliage, flowering baskets, exotic birds, squirrels and acanthus leaves, while the sides feature dancers. A similar chest of drawers stamped by Sageot was sold on December 20, 1994 (Tajan). Now in the Royal Swedish collections, another desk with his stamp has the same guitar player on its top.

Meanwhile, estimated at €15,000/20,000, the Mazarin desk has a première partie marquetry decoration of brass on a red-tinted tortoiseshell background, with a top featuring dancers beneath a canopy within a composition of foliage, tendrils and scrolls, insects and exotic birds in flight (75 x 97 x 60 cm/29.5 x 38.1 x 23.6 in). These motifs come from the now familiar vocabulary of the Louis XIV period: a world of lively grotesques popular in Paris salons. Inspired by the Roman world and modernized by Jean Berain, "draftsman of the King's Chamber and Cabinet" since 1674, these dynamic, imaginative dancers, musicians, monkeys and cherubs are seen in a decoration of foliage and arabesques, which defined the Rocaille style from the early years of the 18th century.

MOBILIER ET OBJETS D'ART
Caen - 13, route de Trouville - 14000
Caen Enchères
Info and sales conditions
Catalogue
Newsfeed
See all news
We will be on vacation from July 23rd - August 23rd. Wishing you a great summer and see you in September!
Santiago Caltrava Renovates San Gennaro Church in Naples
50% Funding Cuts for Arts and Design Courses Approved by UK Government
Instagram’s New “Sensitive Content” Controls Cause Concern Amongst Artists
Not to be missed
Pre-sale
Under the Protection of Maahes: A Rare Egyptian Bron…
This well-sized bronze statuette dating from Egypt’s Late Period…
Pre-sale
The Op Art of Vasarely and the Discourse of Descarte…
This painting by the master of optical art has never come up for…
Pre-sale
Lalanne and the Charging Rhinoceros
This bronze sculpture with an enamel patina, which is from a private…
Pre-sale
From the Abstraction of Viallat to the Silk Paintings…
Two worlds will come together in Nîmes: those of Vietnamese painter…