This Precious Snuffbox Is Nothing to Sneeze At

This gold box inlaid with mother-of-pearl highlighting chinoiseries is a mid-18th century rarity worthy of the finest collections. 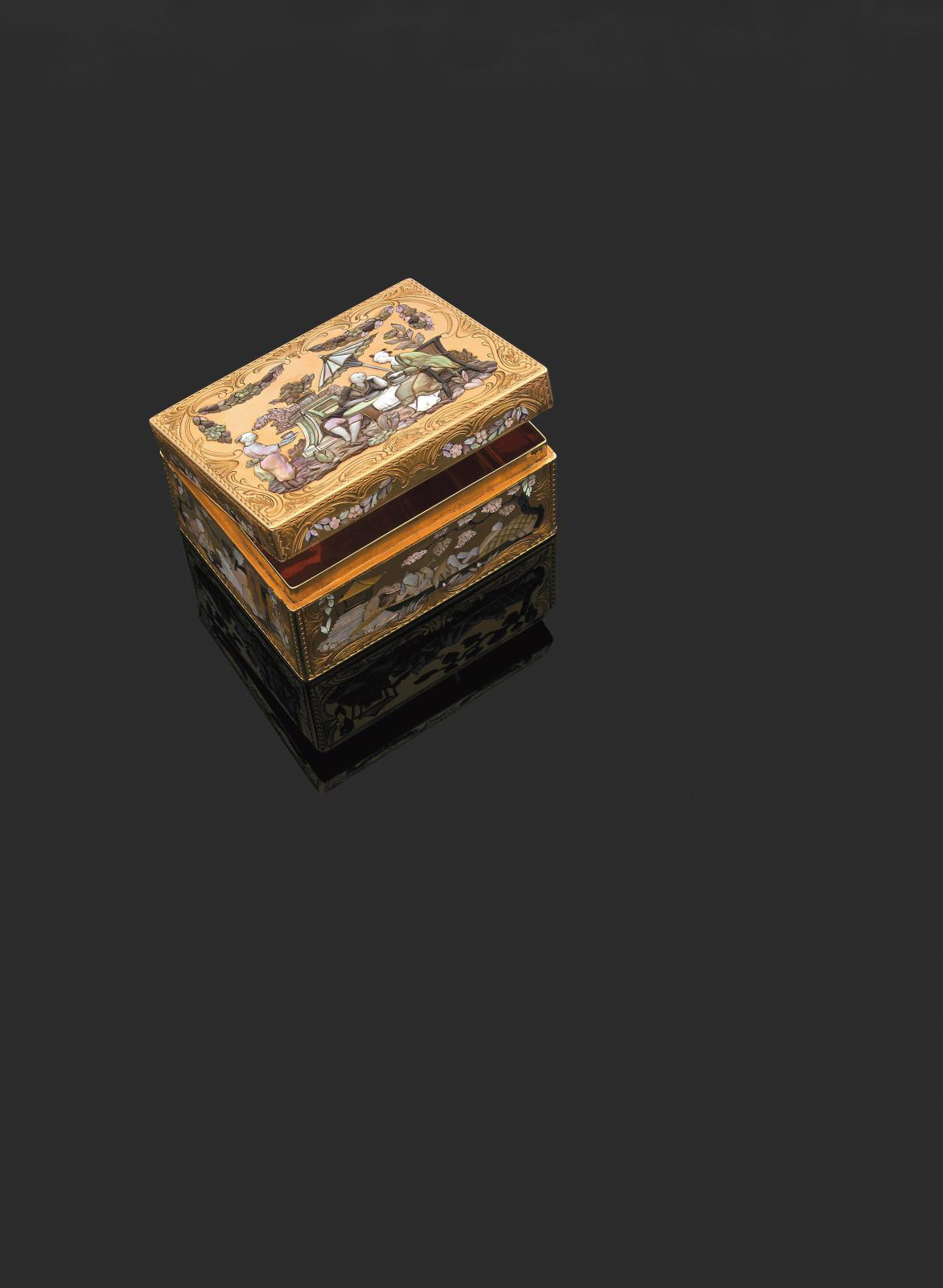 Eighteenth-century high society required a whole ceremony, called the "noble exercise of the snuffbox"—passing it from one hand to the other, tapping it, opening it and presenting it to the audience—before taking a pinch. Obviously, these gestures had to be performed with distinction and without making a face when sniffing in the grated tobacco.

At the time of Louis XV, when this elegant box was made, the container mattered more than the content. The snuffbox was one of those "objects of virtue" that had craftsmen vying to outdo each other’s imagination and that the court and members of the aristocracy showed off to provoke envy. As a private object carried in the pockets of men and women alike and the quintessential luxury product, the snuffbox had an important social dimension. It was often offered as a token of recognition, friendship or love, and was already being collected. This one belonged to the Wertheimer Collection—its refinement could only win over the family, owner of Chanel. Snuffboxes featuring mother-of-pearl, especially on every side, are few and far between. The great discoveries opening up the wealth of new lands allowed this precious material to start spreading in Europe in the 16th century, and its use grew particularly in 18th-century France. Burgau mother-of-pearl is considered the most beautiful. Prized for its red, blue and green highlights, it was used to create spectacular marquetry, as in this gold box emblematic of the years 1740–1750. From this period date pieces combining the exoticism of Chinese subjects with that of the material. One, by Michel de Lassus, in the Louvre, is a case in point.

The object’s plain shape—rectangular models had replaced the curlicues of the early Louis XV period—sets off the decoration’s quality and sophistication. The eye is drawn to scenes conjuring up an imaginary Asia: the tea ceremony, a birdwatcher, fishermen and a woman with a fan. Their quaintness is in keeping with the taste for exoticism that grew in France at the end of the reign of Louis XIV—a contemporary of the Kangxi emperor—as the accounts of missionaries and the goods imported by the East India Company opened up new horizons. The decorative arts were changed forever.

Not Just a Snuffbox: A Gift from Napoleon I

This luxurious snuffbox comes in a red gilt morocco case stamped with the emperor's coat of arms. 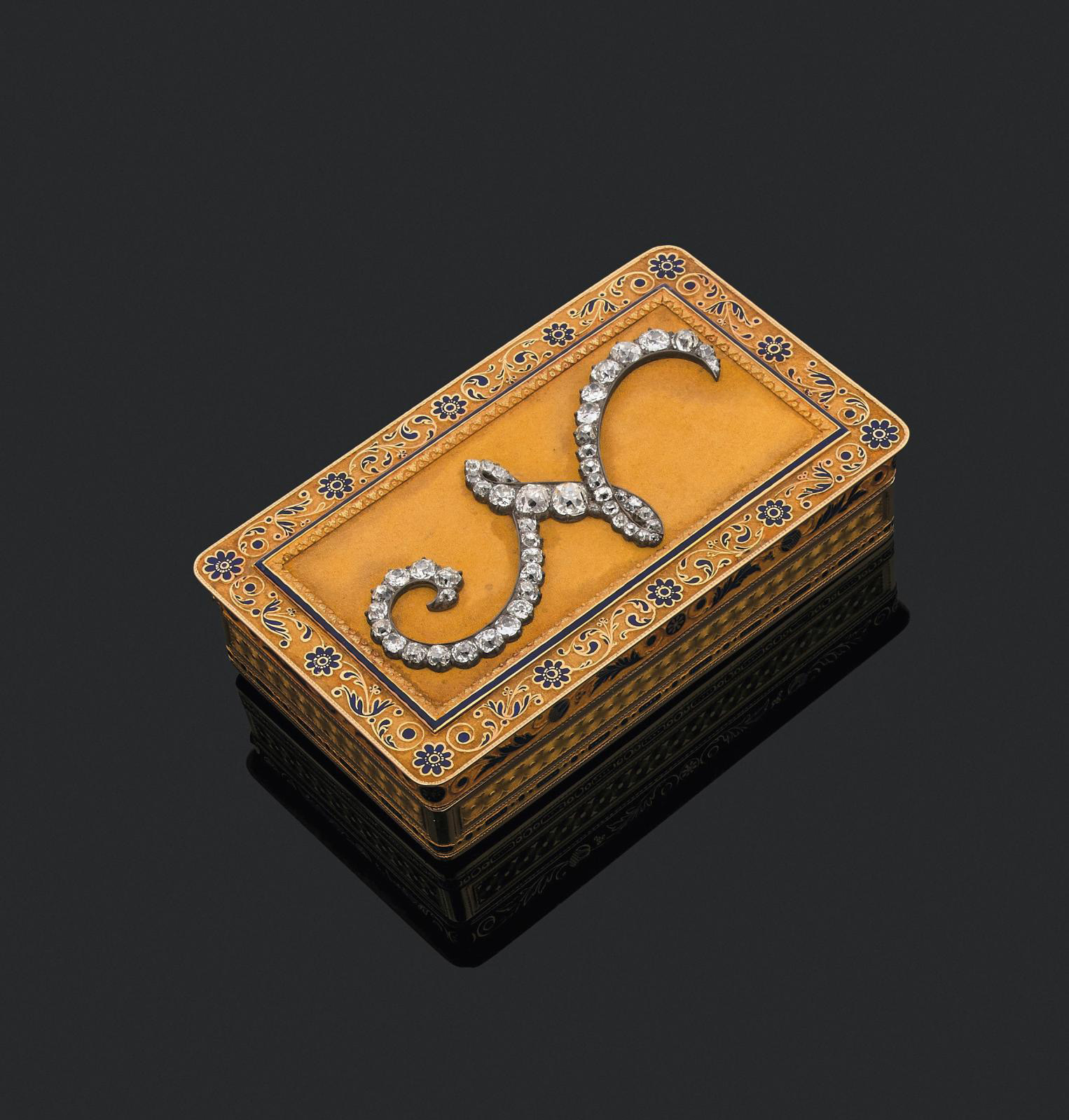 While Napoleon was content with very simple snuffboxes, he revived the Ancien Régime custom of giving precious gold ones as rewards or diplomatic gifts. Of course, the more powerful the recipient, or the greater the service rendered, the more lavish the box, which featured a miniature portrait of the emperor or was set with diamonds in the shape of his monogram. He commissioned snuffboxes from the foremost goldsmiths of the time, including Nicolas Margerit, Étienne Nitot, Adrien Jean Maximilien Vachette and Étienne Lucien Blerzy, circulating French craftsmanship throughout Europe.

This type of diamond-studded box—with or without a crown—was given as a gift under the Consulate, when the monogram was "RF", and during the Empire. The number of "brilliants" (diamonds) sheds light on several commissions. Ours has 52. Snuffboxes of this quality were worth nearly 17,000 francs in 1810; a model similar to ours, signed Blerzy, is in London’s Victoria & Albert Museum. The one to be presented in a few days at auction was made by Moulinié Bautte & Cie, a Swiss company founded by Jean-François Bautte in 1793 that specialized in watches and objets de vertu (objects of virtue). When Napoleon annexed the canton of Geneva in 1798, the city adopted France's system of hallmarks. They are visible on our snuffbox: Blerzy’s diamond-shaped mark is on the lid and bottom, while those indicating the gold content (750 thousandths) and the guarantee (the hand of justice and the number "46" particular to Geneva) are on the body.