This masterpiece of tenebrism is the last of Georges de La Tour's nocturnal scenes still in private hands, and one of his rare signed paintings. It comes from the outstanding collection of Hinrich Bischoff, a German entrepreneur who acquired it in 1975. 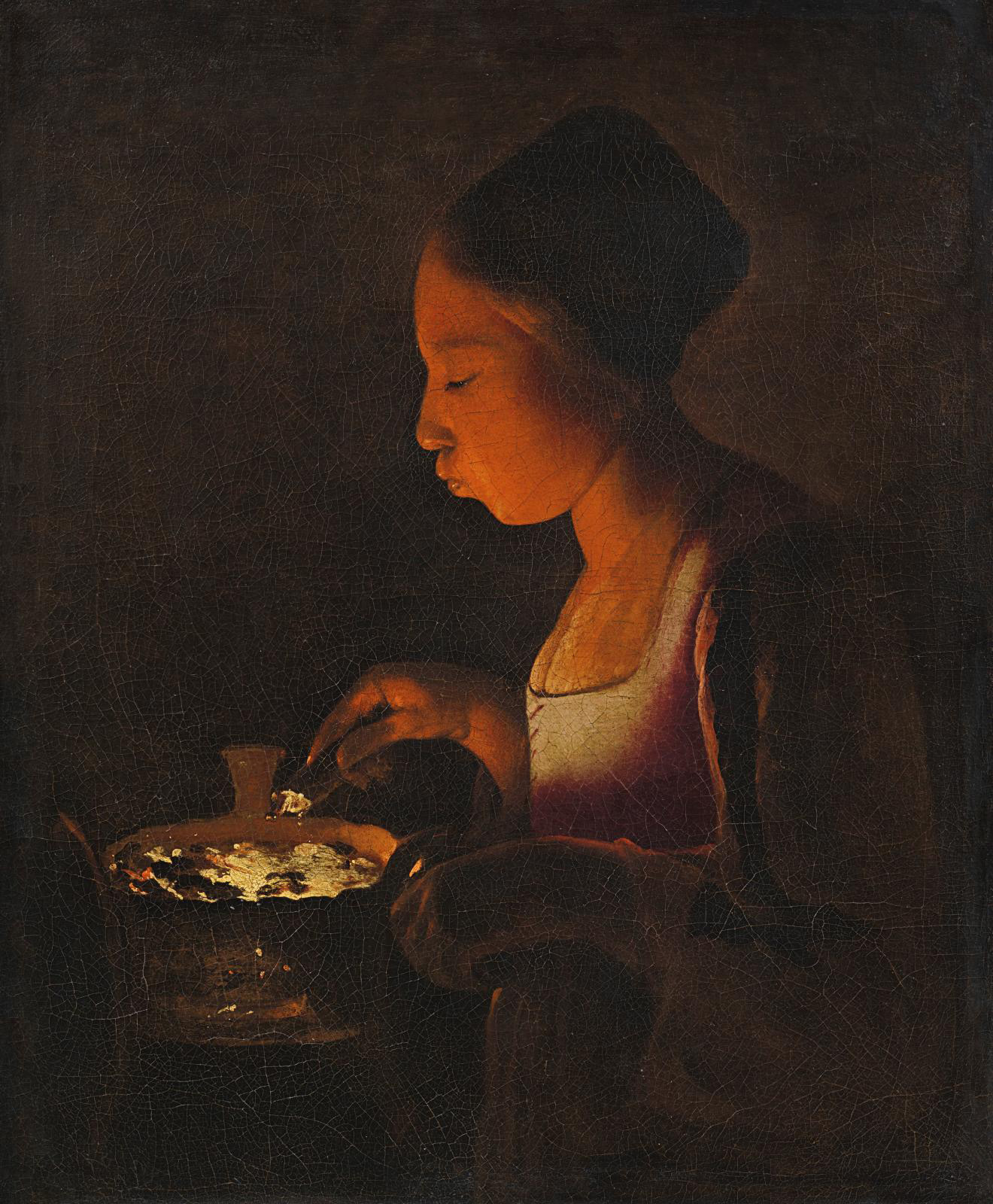 Georges de La Tour's (1593-1652) corpus is celebrated for its quality and originality, that's for certain—but also for its rarity: barely forty-eight works have come down to us. So we have something extraordinary in this Fillette au brasier (Girl Blowing on a Brazier), the last nocturnal scene by the Lorraine master still in private hands. What's more, it is one of his last late works not owned by a public institution, and one of the very few paintings he actually signed. However, the public is well acquainted with this young girl emerging from the half-shadow, having had a chance to admire her in dozens of publications, as well as at the Musée des Arts Décoratifs in Paris in 1948, the Musée des Beaux-Arts in Bordeaux in 1955, the Nationalmuseum in Stockholm in 1958, the Kunsthalle in Bremen between 1976 and 1980, the Grand Palais in 1997 and 2005, and more recently, in 2012, at the Prado Museum in Madrid—to name but a few of her public appearances. The painting's various owners since its rediscovery in Toulouse in around 1940 have all been eager to share it with the general public, including its current owner, the leading German collector Hinrich Bischoff, who has constantly burnished its reputation ever since he bought it at a London auction in 1975. The master of chiaroscuro, forgotten for centuries, was brought back into the limelight at the start of the decade through the work of Pierre Rosenberg and Jacques Thuillier, who both believed that Fillette au brasier was one of La Tour's very late masterpieces, the period now most popular with collectors and the public. Rosenberg dates the painting to around 1646, while Jacques Thuillier considers it one of his last autograph works. Jean-Pierre Cuzin, for his part, suggests a date between 1646 and 1648. "With the rustic beauty of the model, the single light source and the simplification of forms, everything in this small masterpiece is fascinating," wrote Pierre Rosenberg in 2006.

Masterpieces from the Bischoff Collection
Cologne - Neumarkt, 3 - D-50667
Lempertz
Info and sales conditions
Catalogue
Newsfeed
See all news
Stunning Discoveries in Saqqara
Hyundai and Rhizome Join Forces to Celebrate New Media
You Can Pocket the Art (Literally) at The Little Free Art Gallery
The Audemars Piguet Art Commission Is Over the Moon
Not to be missed
Pre-sale
Sacred Objects of Mexico
Like the standing figure from the pre-Teotihuacan culture on the…
Pre-sale
18th-century Sculptors and Cabinetmakers
Fine 18 th century furniture has become a somewhat rare commodity…
Pre-sale
Jean-Baptiste de Champaigne and his Study for the Mercury…
This preparatory work recalls Jean-Baptiste de Champaigne’s participation…
Pre-sale
Treasures from the Larminet-Davioud Collection
The Lille antique dealer’s collection of ivory, wood, stone, leather…