Chantal Thomass: Beyond the Bustier, the Fashion!

The sale of the French designer's archives at Drouot traces the journey—more complex than it looks at first sight—of a woman whose fame went beyond the world of lingerie. 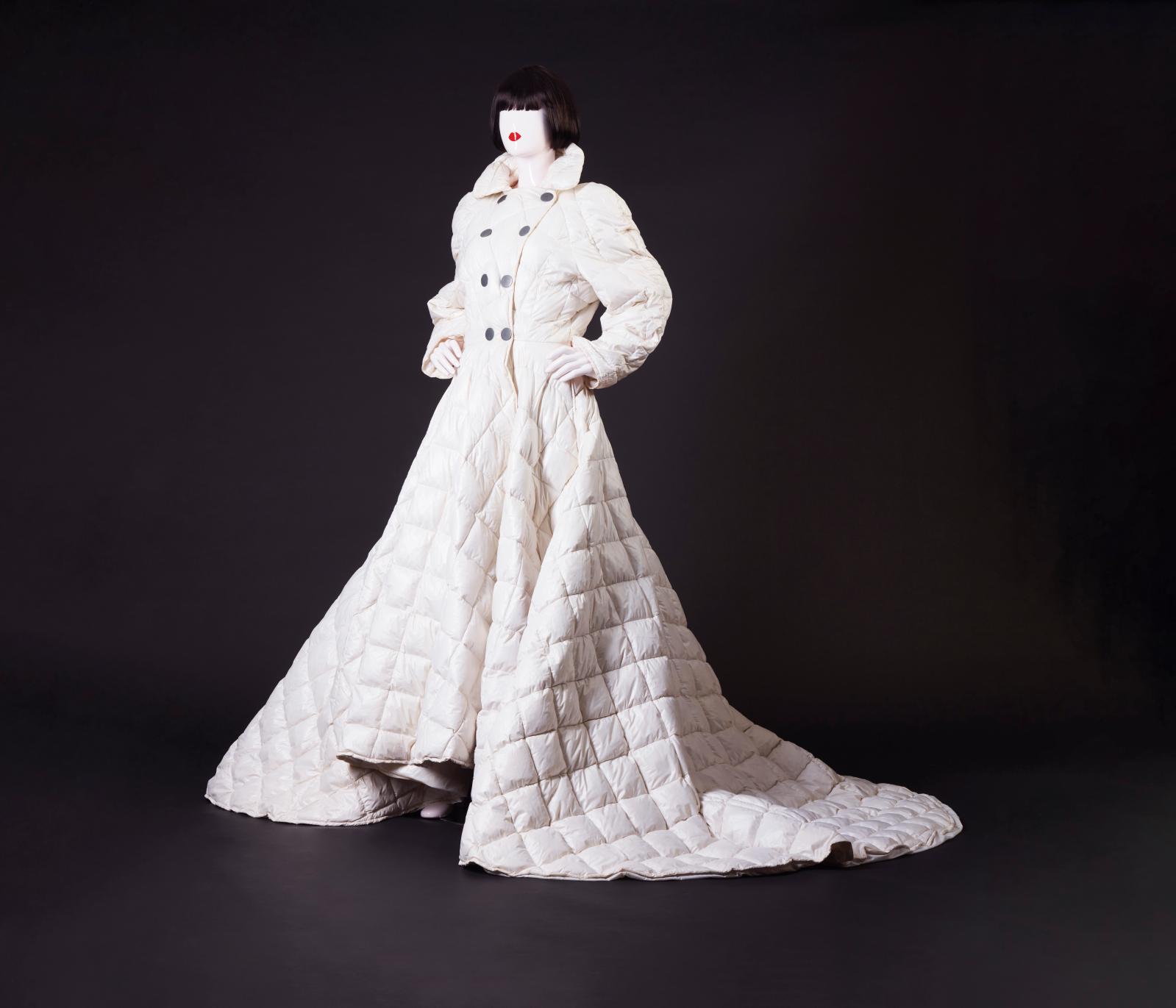 Chantal Thomass’s style immediately brings to mind a black and white woman's tuxedo, a powdery pink boudoir and crimson lipstick, all of which are highlighted by a silhouette with a square, fringed haircut whose profile became her logo in 1981. "Chantal Thomass is also the creation of an image,” says Sylvie Richoux, head of collections at the French National Center for Stage Costume in Moulins, who curated the 2001 Marseille monographic show. “In the early 1980s she chose to embody her brand. It was groundbreaking." But the auction of 274 archival pieces, originally set for March 5 at Drouot, but postponed to Thursday, May 6, reveals a more complex story. "The sale will highlight Chantal Thomass’s ready-to-wear work, which is less well known than her lingerie," says expert Didier Ludot. "It will protect an important clothing legacy." Alexandre Samson, head of haute couture and contemporary design at the Palais Galliera (the Paris fashion museum), considers Ms. Thomass "an emblematic woman of her time".

The Birth of a Style
"The catalog starts with designs by Ter & Bantine, the brand Ms. Thomass founded in 1967 with her fiancé and husband-to-be Bruce Thomass, a Beaux-Arts student who created the turpentine-painted fabrics used for the models. This was Ms. Thomass's start in fashion.

They sent some dresses to a trendy Saint-Tropez boutique, where Brigitte Bardot and Michèle Mercier quickly snatched them up. When the actresses were seen wearing them, the dresses became instant sensations and orders started pouring in.

A bit later in 1970s Paris, young fashion designers were overturning conventions against a backdrop of intense social change. Thierry Mugler, Claude Montana, Jean-Charles de Castelbajac and Kenzo were close to Ms. Thomass: the time had come for strong individual styles. She decided to express hers under her own name, founding her brand in 1975. "Chantal Thomass was the great initiator of male/female, veil/unveiled, top/bottom," according to the sale catalog. She quoted her heroines, including Greta Garbo, Louise Brooks, Marlene Dietrich and Josephine Baker.

Comfort and style go hand in hand with Ms. Thomass. This could already be seen in the use of her favorite materials, which expressed that combination throughout her career. A 1975 ruffled dress attests to her fascination with lace (€150/180) and feathers appeared in the same year’s Autumn-Winter Collection. "Feathers are spectacular, light and warm at the same time," says the designer. The first recurring themes can also be seen, such as the embroidered slip, of which an emblematic example from the 1979 Autumn-Winter Collection was made "by and for" Ms. Thomass (€400/600). "Chantal was one of the few women in this generation of great couturiers,” says Mr. Ludot. “Her work has a sensuality tinged with humor. It was a breath of fresh air."

Lingerie Enters the Mix
Proof of that is the sale’s amazing selection of accessories from the 1980s and 1990s. "I love her Schiaparelli side, with the phone-shaped bags (€150/200) and corset hats (€400/600), for example,” Mr. Ludot continues. “She did whatever she thought was fun." In the 1980s that creativity established her brand as a force to be reckoned with. By the turn of the decade, her lace tights were all the rage. A bit later, in 1985, she began a long collaboration with the iconic French brand Moncler. As time went by, cotton gabardine, denim and mohair outfits mingled on the catwalks with evening wear, like this 1988 embroidered silk organza skirt (€200/250), which Ms. Thomass remembers: "There was gorgeous handiwork in France".

The designer’s sophisticated reinterpretations of lingerie-corsetry permeate her ready-to-wear collections. Lambskin bustiers were slipped under a silk chiffon blouse (1980, €180/200) or Chantilly lace (1983, €120/150), so it was only natural for lingerie to start showing up on catwalks. "At first I made lingerie by chance to accessorize my silhouettes,” Ms. Thomass says. She hit the bull’s-eye: "It worked right away because there wasn't much for young people in those days." Shazia Boucher, deputy director of the museums of Calais, says, "Chantal Thomass belongs to the generation of women who burned their bras and considered lingerie very freely. Lingerie was very technical back then. She was among the first to reintroduce the use of silk and pieces such as the corset or bustier, symbols of the woman-object."

A Theatrical Maturity
Lingerie became one of Ms. Thomass’s signature themes, but that did not stop her from displaying freedom of expression allowed by years of experience in her ready-to-wear at the turn of the 1990s. Playing with theatricality, she introduced crinoline into fashion shows that now had evocative names and summoned all the "tops" of the time. Her brides’ silhouettes eventually pushed her favorite themes to the limit: the Moncler down jacket (Autumn-Winter 1992, €400/500) and the tailcoat (Russian Winter parade, Autumn-Winter 1990-1991, €250/300) had trains. The Autumn-Winter 1993-1994 "Hard Rock Medieval" bride (€300/350) wore a silver-studded leather corset-turned-chastity-belt with garters and chains. More straight-laced pieces such as "porthole" jackets (€200/250) and the tweed frock coat (€250/280) established the male/female look Ms. Thomass had been cultivating for over 20 years. "I love that frock coat," says Mr. Ludot. "From the front, it looks like it belongs to a grandfather, and from the back, it's an ultra-feminine frilly piece. Chantal Thomass left a mark on her time with that ambiguity."

A Special Relationship with Know-How


"What sets Chantal Thomass apart is her sense of materials," says Alexandre Samson, head of haute couture and contemporary design at the Palais Galliera-musée de la Mode de la ville de Paris. She "doesn’t shy away from the technical side," adds Sylvie Richoux, director of collections at the French National Center for Stage Costume in Moulins), and works closely with manufacturers in a country abounding in local know-how. Ms. Thomass wove close ties to the lacemakers of Calais-Caudry. "I loved lace,” she says. “I visited manufacturers to have a look at their archives and feel the materials, especially the Leavers laces, which are the most refined. We found magnificent drawings that we reinterpreted with modern techniques and experiments."
In Saint-Etienne, the ribbon factory stronghold, the preparation of the "Les Rubans de l'intime" (“Intimate Ribbons”) show, which the designer is sponsoring, offers a chance to look back at when she often visited the area. "Saint-Étienne ribbons aren’t just the visible ribbons, but also all the technical ribbons that structure a piece of lingerie," says Sylvain Bois, head of the scientific unit and collections of the city's museums. "Their particularity is that their purpose shifted in order to develop specific features," adds Sylvain Besson, head of textile collections at the musée d’Art et d’Industrie in Saint-Étienne. "For her ready-to-wear clothes, for example, she worked with one of the last companies to make Jacquard ribbon." In the exhibition catalog’s preface, Ms. Thomass shares her taste for detail with a mischievous tone: "I met my first ribbon a long time ago and still play with it often. It’s all my desires and extravagance."
Chantal Thomass
in five dates

1975
Creation of the Chantal Thomass brand
1979
First lace pantyhose made by Wolford
1981
Chantal Thomass logo by Benoît Devarrieux
1995
End of ready-to-wear. Ms. Thomass is divested of her brand (she buys it back in 1998).
2011
Ms. Thomass joins the Chantelle Group.
Worth seeing
"Les Rubans de l’intime" at the musée d’Art et d’Industrie in Saint-Étienne,
May 4 to November 14, 2021.
MADAME CHANTAL THOMASS40
YEARS OF FASHION

[paris, hôtel Drouot]
Salle 5 - Hôtel Drouot - 9, rue Drouot - 75009
Millon
Info and sales conditions
Catalogue
Salerooms
Newsfeed
See all news
The Seattle Art Museum Announces Major Overhaul of its American Galleries
Paris Tribal Returns to Saint-Germain-des-Prés in Paris
Artists and Activists Criticize Hungary’s New Anti-LGBTQ+ Legislation
Looted Maqdala Withdrawn from Auction to Return to Ethiopia
Not to be missed
Pre-sale
A Young Woman in the Sun by Renoir
At the height of his career, the Impressionist master made one of…
Pre-sale
Eugène Delacroix: An Impassioned Believer
Eugène Delacroix (1798-1863) was deeply attached to religion and…
Pre-sale
The Strasbourg Jugendstil from Oberlé to the Treser …
Art Nouveau or Art Deco ? It is hard to say, since this silver bowl…
Pre-sale
Olga de Amaral’s Textiles: Halfway Between Colombian…
Rare on the European market, the work of Colombian artist Olga de…