Märklin: king of the ponds

Famous for its trains of yesteryear, the company founded 160 years ago contributed to the pre-1914 "golden age of toys". This time, a paddle steamer returns to duty, opening the way to a fine bidding battle. 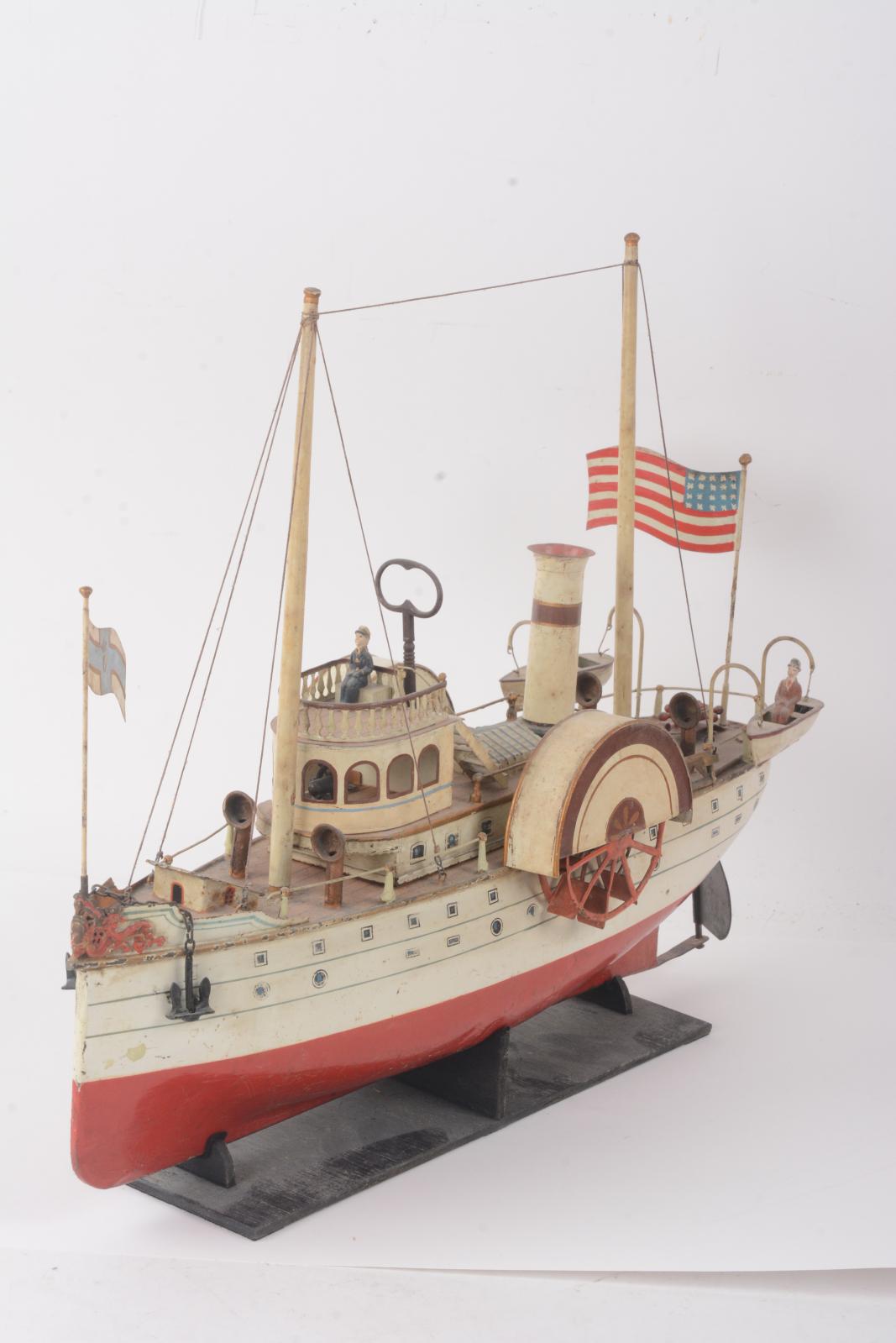 In around 1900, every little boy longed for a ship that could sail on the water, equipped like the real thing with all its accessories, reproduced with perfect accuracy. This is the case with this boat 50 cm long made by the Märklin company, imitating the ones that used to sail on lakes, rivers and other navigable waters. Like them, it is equipped with paddle wheels, a funnel, a mast with rigging, two rowing bats and flags, one of them American. This reduced model of ca. 1910 (in its original condition, complete with key) was made in painted sheet metal. So this toy can really be used by children on a stretch of water, unlike the kind designed to be placed or pulled along on wheels, and its manufacturer devised a propulsion system to move it forward. If we set aside the traditional sail, the two most commonly used solutions would be steam engines, or as here, the sort with a mechanism to drive a propeller, blades and paddle wheels. How does it work? Simply by means of a clockwork movement consisting of a steel spring and a winding square located on the bridge, into which a key is inserted… In 1859, Theodor Friedrich Wilhelm Märklin started producing metal doll's houses and kitchens. Boys' toys followed on, particularly clockwork trains with modular tracks, designed from 1891 onwards by the founder's sons, Eugen and Karl. In around 1895, boats appeared in the catalogue, and were then produced in all kinds of versions ranging from liners to battleships. Success was finally assured. Changing its name to "Märklin Frères et Cie" in 1907 with the arrival of a partner, Richard Safft, the company garnered various awards, including the Grand Prix at the Brussels Universal Exhibition in 1910. But sadly, the golden age of toys was cut short by the 1914 war, and like many other manufacturers in this sphere, Märklin had to stop producing them to supply arms… Today, the company has refocused its activity on railway models alone.