A Gargoyle by Victor Hugo

A book collecting couple amassed a collection dedicated to Victor Hugo, including three drawings by the famous French Romantic author. 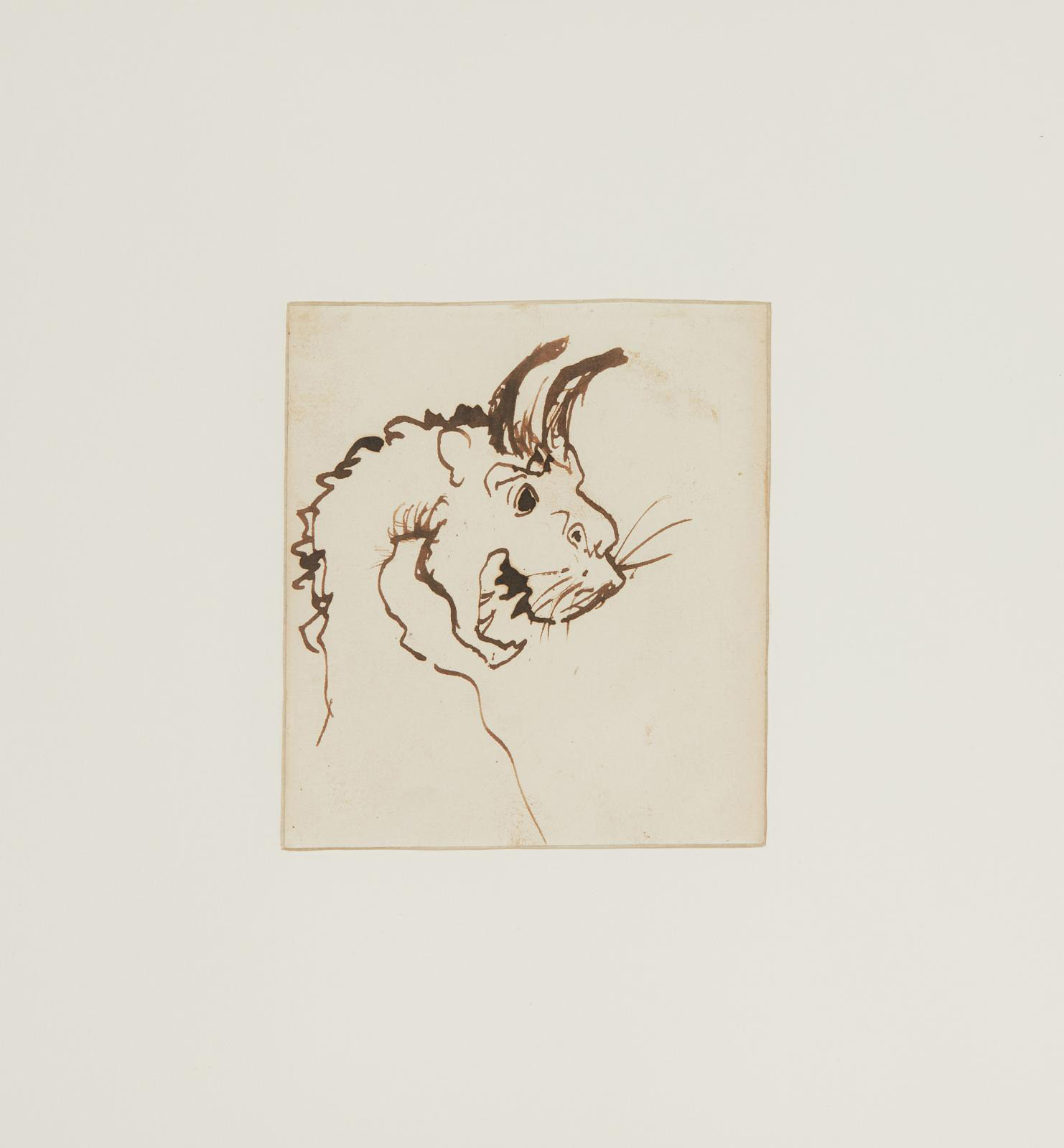 This gargoyle wouldn’t look out of place atop one of the bell towers of Notre Dame in Paris. Sketched with rapid strokes in pen and brown ink, this profile of a grimacing gargoyle head (roughly 3.3 x 3 in) is one of three works on paper signed by Victor Hugo up for auction on September 28 by Nouvelle Étude at Drouot, as part of the sale of this bibliophile couple's collection, who were both specialists in the Romantic writer. This particular work carries an estimate of between €2,000/3,000. Was it drawn before or after the author penned his famous novel Notre-Dame de Paris in 1832? The absence of a date leaves this to the imagination. Victor Hugo left over 2000 graphic works and his former home on the Place de Vosges, in Paris, counts over 700 in its collection.

The Collection of Jean and Sheila Gordon, Two Lovers of Victor Hugo

Both specialists of Victor Hugo, they collected an array of autographs, books and ink drawings by their favorite author. 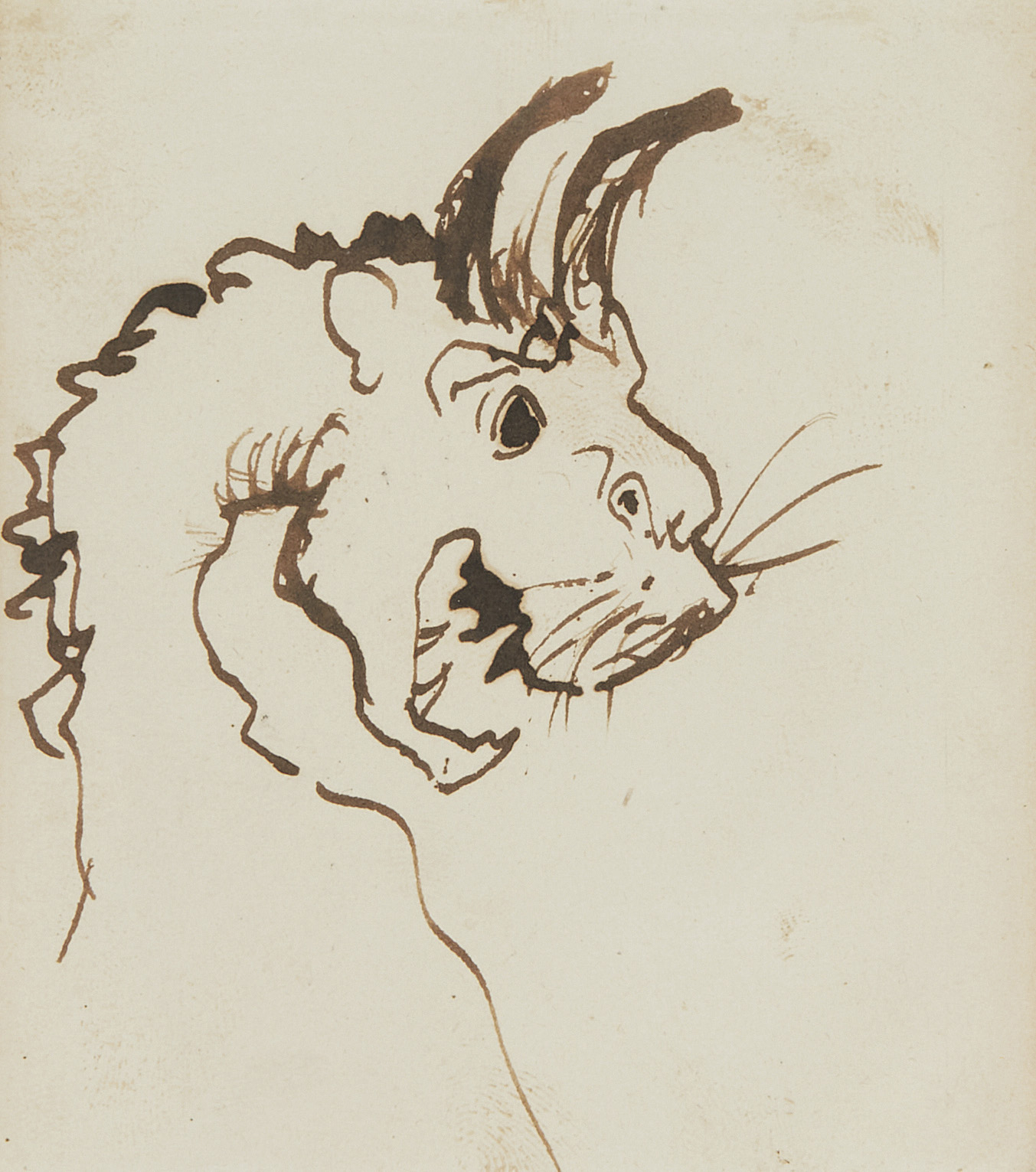 If it is a love of music and painting that Jean (1926-2019) and Sheila Gaudon (1933-2017) shared, then it is truly around the poet, playwright, novelist and Romantic artist that they worked together. Three drawings by Hugo are presented: Tête de gargouille (Head of a Gargoyle, see photo), Empreinte de fougère (Imprint of a Fern, €1,500/2,000), and Nuées et soleil et empreinte de pièce (Clouds and Sun and Coin Print, €1 000/1,500). The horned animal at once recalls the fantastical creatures adorning Notre-Dame of Paris and refers to medieval iconography—a central source of inspiration for the author—, while the foliage evokes a fossil, of which Hugo was an enthusiast, and his passion for botany. The third work corroborates with the verse of his contemporary, the Romantic poet Gérard de Nerval, “[…] the black sun of melancholy”.

About fifteen letters, dating between 1827 and 1870, are modest but invaluable. Within them we encounter his father, his wife, and his friend, Alfred de Vigny. And then there are the letters which are addressed to him: a letter from his son Charles, on the back of which Hugo has hastily written a draft for Les Misérables (€2,000/2,500); others from his companion Juliette Drouet and his disciples Auguste Vacquerie and Paul Meurice; his colleagues Alexandre Dumas and François-René de Chateaubriand; or the publisher Pierre-Jules Hetzel.

Of course, libraries built around Hugo’s works are not rare, however, the one gathered by this couple of academics—in France, London, Manchester and Yale—reflects their own desire to make a special case for each of his works: Les Contemplations in a first edition and first print (€800/1,000), Actes et paroles (Acts and Words) on Holland paper (€2,000/3,000), La Voix de Guernesey (The Voice of Guernsey), with a mailing to the publication "Martiri italiani" (€1,000/1,500).

In the absence of a bequest to the Lyon Library, this collection is going to be auctioned, which will no doubt arouse the interest of the French National Library (BnF), the Maison de Victor Hugo at Place des Vosges in Paris, the Musée Victor Hugo in Villequier, the Victor Hugo Maison Littéraire at the Château des Roches, in Bièvres, and of course, the enthusiasts.

Print the article
Newsfeed
See all news
Restitution, Nepal Seeks to Reclaim its Heritage
In Aubusson, the Cité internationale de la tapisserie Is Thinking Bigger
Tempera Work by Mark Tobey Approaches the Million Euro Mark
Gwangju Biennale Postponed to 2023
Not to be missed
Pre-sale
Jacques-Laurent Agasse and the Challenges of …
Jacques-Laurent Agasse, a brilliant animal painter, was born in…
Pre-sale
A Japanese-Inspired Clock
This particularly decorative clock illustrates the late 19th-century…
Pre-sale
Willem de Kooning, the Rejection of Styles
Unlike abstract expressionist painters, Willem de Kooning never…
Pre-sale
Emile Gallé, the Virtuoso Art Nouveau Gardener…
The thistle was one of Emile Gallé’s favorite themes. That should…