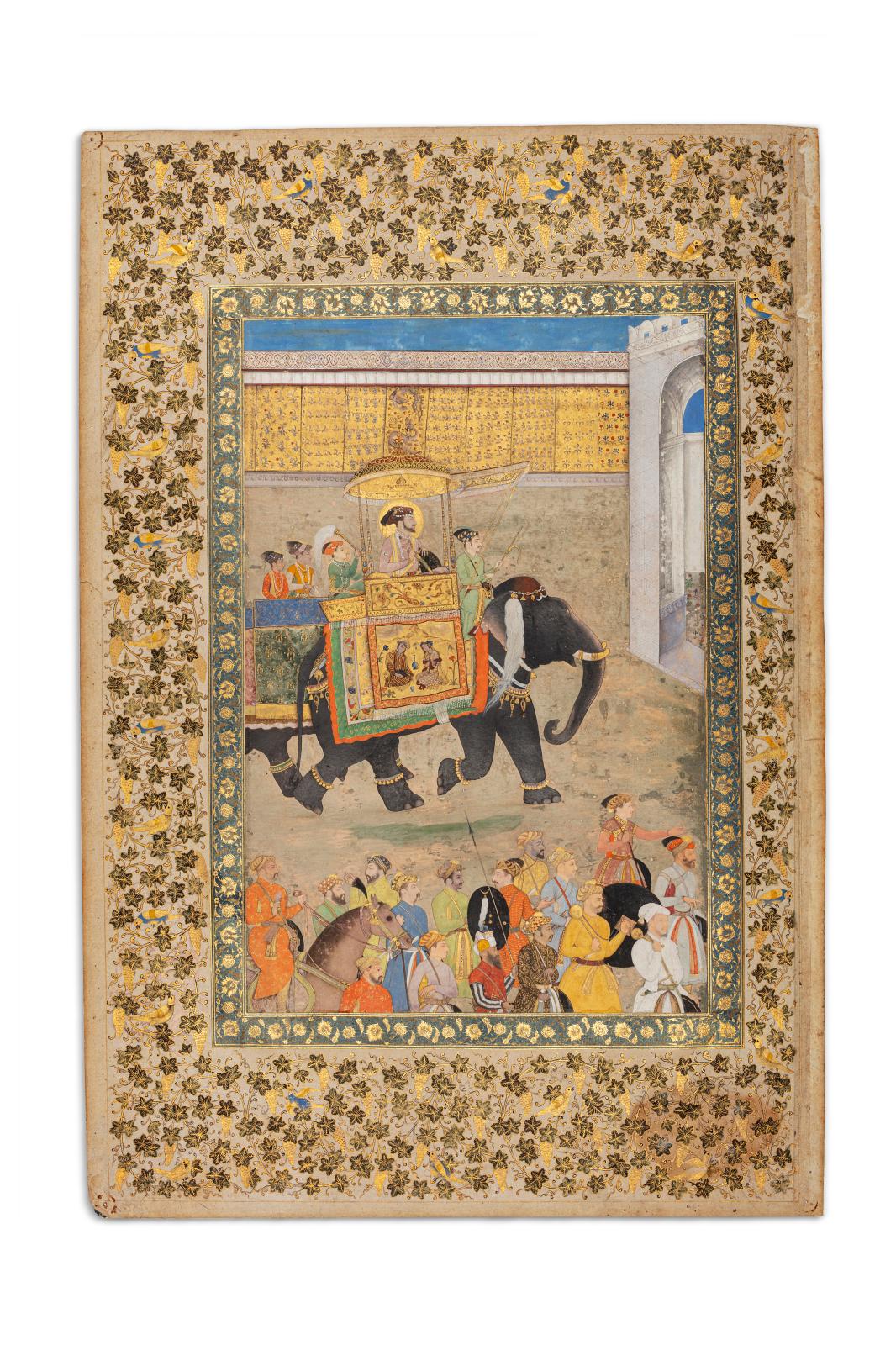 At the turn of the 1630s, the Mughal Empire was experiencing a true golden age under the reign of Shah Jahan (1592–1666), the Muslim dynasty’s fifth emperor, who introduced Persian literature and culture to the Indian subcontinent. This rare painting discovered by Anne-Sophie Joncoux-Pilorget, head of the Oriental Arts Department at the Millon auction house, is a precious testament to the emperor’s probable commission to decorate his royal chronicles. Known as the "Windsor Padshahnamah", there are several versions of the collection in the world's greatest museums. Between 1630 and 1632, Shah Jahan made Burhanpur the capital of his sprawling empire. This leaf immortalised his and his retinue’s entry into the city. The illustrious procession of the sovereign, his father, father-in-law, three eldest sons and prime minister is about to pass through the gates. In the background, a long wall treated with gold recalls that during his reign, spectacular Mughal architecture, rich with hard stone inlays, reached the height of its glory. The most famous building from that time is none other than the world-renowned Taj Mahal, which Shah Jahan commissioned as a tomb for his wife, who died while giving birth to their fourteenth child. "This piece," says Ms Joncoux-Pilorget, "perfectly illustrates the exchanges between India and Iran in the book arts in the second quarter of the 17th century. To my knowledge, a work of this quality has never come up for auction."

The work of a virtuoso
This gouache-painted sheet highlighted with gold and ink, featuring a quatrain by Persian calligrapher Emad al-Hassani (1553/54–1615) on the obverse, was made by Abid, an artist believed to have been active between 1604 and 1645. Son of the Persian painter Aqa Riza, who had arrived at the Mughal court in 1589, Abid is considered the greatest painter at the court of Shah Jahan, whose imperial workshop he joined around 1615. While his portraiture skills were well-known to the court, Abid excelled in the art of depicting processions and battles. The refined ornamentation of the elephant's saddle blanket on which the emperor sits attests to the young painter’s amazing mastery of the art of the Persian miniature, which he certainly perfected with his father. "This leaf is museum quality, especially since it’s very well preserved," says Francis Richard, director of the Louvre's new department of Islamic arts.

An exceptional provenance
The leaf is also interesting because the same French family has owned it since the 19th century. When Antoine Kitabgi, an Armenian from Constantinople, moved to Tehran in 1879 to become the Persian Empire’s customs chief, he worked wonders. After increasing customs revenues by 75%, Kitabgi was decorated by the shah and showered with honours. After his death in 1902, the Kitabgi family's ties with Iran continued through his three sons and descendants, who have now decided to turn over a new leaf in their family history. Just a few hours after the auction catalogue was published, Ms Joncoux-Pilorget received many calls from American and European institutions, which will hopefully position themselves on auction day. However, Iran's 16th-century conversion to Shiism explains the reluctance of collectors from the Gulf, who follow the Sunni and Wahhabi denominations of Islam, to own a piece like this. "It is not an object from the Arab world. On the contrary, it is typically the sort of treasure that allows us to distinguish the Eastern arts, to which calligraphy and Indo-Persian paintings belong, from Islamic arts in the broad sense."

ISLAMIC ARTS & ORIENTALIST PAINTINGS
Salle 5 - Drouot-Richelieu - 9, rue Drouot - 75009
Millon
Info and sales conditions
Catalogue
Salerooms
Results
News feed
See all news
Planning for new museum dedicated to Le Corbusier begins
Virginia Museum of Fine Arts receives gift of over 8,000 Aaron Siskind photographs
Banker sentenced to jailtime for trying to smuggle a Picasso out of Spain
Domaine Royal de Marly museum, the Sun King’s hideaway, reopens
Not to be missed
Pre-sale
A new Ribera on the market
After Cimabue, Artemisia and the Master of Vyšší Brod, Paris is…
Pre-sale
The world revealed at last
This composite atlas printed in Nuremberg between 1753 and 1759…
Pre-sale
Picasso and the Minotaur
Through a complex iconography, Pablo Picasso exorcises his angst…
Pre-sale
The Brölemanns, Lyon bibliophiles
Kept in the same family until today, 260 works attest to the bibliophilic…