After ruling the seas under the French Restoration, a famous warship - or rather its model, an exquisite example of Dieppe ivorywork – looks set to be the highlight of a sale devoted to sailing and nautical antiques. 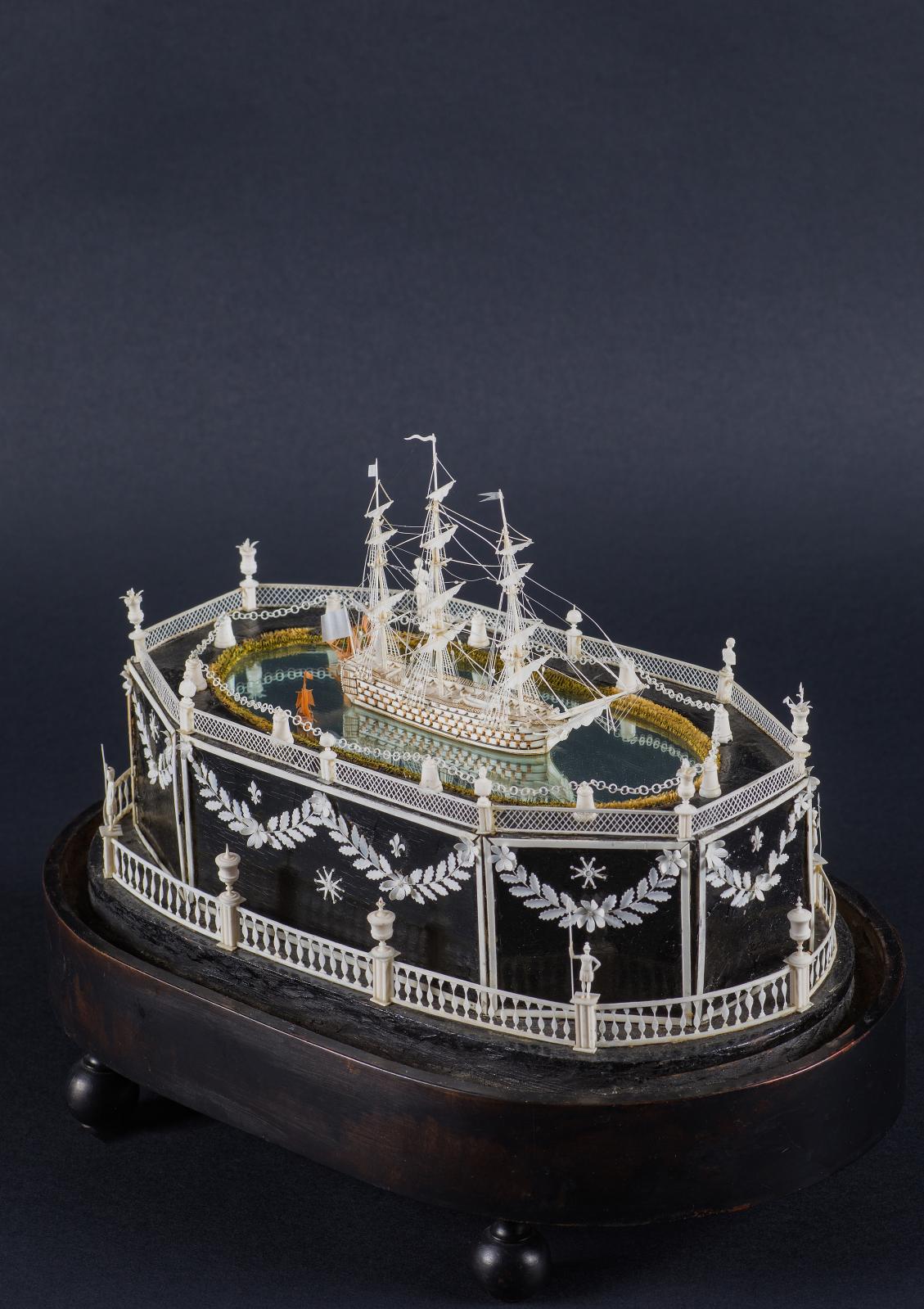 Sailing on waves simulated by a mercury mirror, the ivory model of a warship sports three masts with full sails. This is Le Royal Louis, one of the most powerful ships of its time, reproduced to scale in every detail (despite its size – the ship's hull is only 7 cm long). In its wake, a cutter and a brig carved from boxwood provide a stark contrast with the giant of the seas. The creator of this little masterpiece was a virtuoso but anonymous artist from Dieppe in Normandy, the Mecca of ivorywork since the 17th century. Famous for its production of accessories (ranging from fans to tobacco graters) and its celebrated statuettes, the port city began to specialise in naval models at the turn of the 19th century, and some fine examples can be seen in its chateau-museum.

One of the most important components of Napoleon I's fleet
Thanks to its decorative features, symbolic of the political upheavals in post-revolutionary France, the piece being sold by Rennes Enchères auction house can be dated to 1814 or 1815. This period also coincides with the local boom in the production of these reductions by masters in the field. Some were well-known, like Louis Charles Vincent Belleteste (1757-1819), who created the Ville de Dieppe given to Empress Josephine in 1810 by the city (now in the Musée National de la Marine in Paris). For these remarkable objects were often intended for important figures, and presented as gifts at official visits. According to Philippe Neveu, the sale expert who identified the ship, its model "could also have been commissioned by a demanding patron." The turbulent history of the vessel that inspired it is better known. When it was built in the Toulon shipyards in 1810, it was called L'Impérial. It was one of a series of standardised flagships commissioned by Louis XVI in September 1785, of which sixteen versions were produced. With its three decks and ability to carry more than 130 pieces of artillery, it became one of the most important components of Napoleon I's fleet. But when the monarchy was re-established in 1814, the ship was named Le Royal Louis – before becoming L'Impérial again during the Hundred Days War (which marked the period between Napoleon's return from exile on the island of Elba to Paris on 20 March 1815 and the second restoration of King Louis XVIII). At the end of this episode, and now permanently adorned with its monarchist name, it provided sterling service until it was broken up in 1825.

Imperial, Royal, National Navy
Rennes - 32, place des Lices - 35000
Rennes Enchères
Info and sales conditions
Catalogue
News feed
See all news
Manga more popular than Rembrandt or Captain Cook at the British Museum
New dates for PAD Paris in October
A Van Gogh stolen from a Dutch Museum
The Kunstmuseum Basel will compensate the heirs of Jewish art collector Curt Glaser
Not to be missed
Pre-sale
Boy with a dog
This presumed portrait of Napoleon Bonaparte's great-great-nephew…
Pre-sale
Engraved treasures from the Marcel Lecomte collectio…
The sale at Drouot of a collection assembled by this leading Parisian…
Pre-sale
Roses, roses all the way…
Although unsigned, this Art Deco pendant combining precious and…
Pre-sale
With bare hands
This Nude with crossed hands is one of the very few carved wood…