Napoleon III's elite Cent-Gardes cavalry squadron was entirely devoted to the Emperor and his family. The Debaecker collection relates its remarkable history and reveals its intimate side. 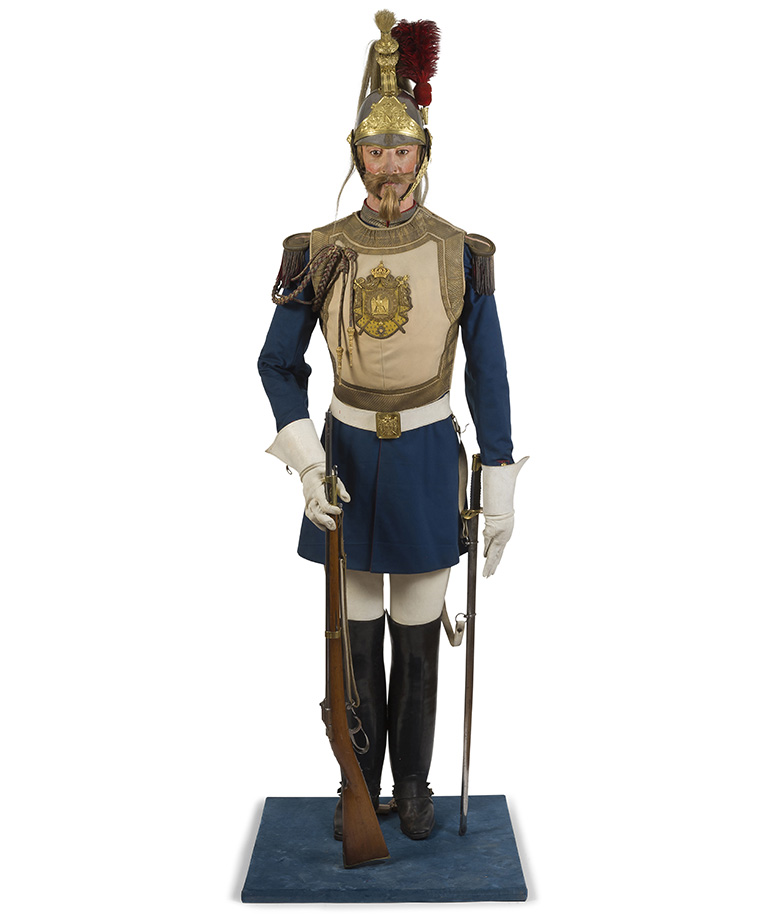 Looking positively splendid in his magnificent full-dress uniform, this guard is no ordinary officer: he is a member of Napoleon III's Cent-Gardes squadron. To enter this elite corps, a cavalryman had to be at least 1m78 (5 ft 8in) tall: a height that was even increased by two centimetres after 1858. It is easy to imagine the fine figure he cut and his success with society, particularly the fairer sex! In her Veillées normandes ("Normandy gatherings") of 1867, the Comtesse de Mirabeau recounted the interest of a young provincial woman visiting the capital: "One thing alone excited her admiration: a Cent-garde! She wanted to alight from the omnibus to examine him more closely, but her husband promised to show her others, absolutely identical, and even assured her that this was one of the curiosities that could be seen in Paris without paying anything." A guard with the lofty status of a Paris monument! Although we don't know the name of this handsome officer, we can cite those of some of his colleagues: Favier, Masse, Bernie, Junqua (recruited for his height, 2 m 04, 7ft 8in) and Parnet. History rarely records soldiers' names unless they have performed a heroic act, but this squadron was so prestigious that every one of its members was identified.

The Emperor's "caryatids"
In December 1852, to establish his power, the new Emperor was quick to revive the splendour and pomp of his uncle, Napoleon I, despite the latter's dethronement. For example, he wanted to recreate the Imperial Guard. Another reason lay behind this: exiled on several occasions to Great Britain, he was lastingly impressed by the Life Guards in charge of protecting the sovereign. On March 24, 1854, he decreed the creation of the Cent-Gardes cavalry squadron: an elite corps with one hundred members, as their name implies, dedicated to his and his family's safety and service. Subject to strict discipline, these hand-picked guards were irreproachable, on duty from morning to late in the night. Above all, they had to remain impassive, hence their nickname: the "caryatids" of the Palace. There is a story that one day Empress Eugenie slapped one of these men to force him to react, apologising the next day. And of course, he stood still like marble… This life also had its pleasant side. On the strength of their success with the ladies, their precedence over all the other corps in the army and their comfortable income, the Cent-Gardes were often seen at salons, cafés and shows when they were not on duty (an invitation to an evening at the Théâtre du Palais de Compiègne is up for sale here with other mementos). But more than anything else, they maintained unswerving loyalty, attending Napoleon III wherever he went, in peace and war alike. They were taken prisoner with the Emperor during the disastrous surrender at Sedan on September 2, 1870. Many of them were then forced to return to civilian life, while some were assigned to other army corps.

In the intimate surroundings of an elite corps
This mannequin, complete with ceremonial uniform, arms with an estimate of €40,000/50,000, will be sold piecemeal (ten lots in all) before being proposed as a multi-unit option. The sale features another extremely rare item: the squadron's bugle made by Adolphe Sax (1814-1894), the famous instrument-maker and brilliant inventor of the saxophone. This is poised to sound the squadron's return to favour at €40,000/50,000. After that, various private mementos of these men of the elite corps will be on offer at a few hundred euros each, including the personal effects of Colonel Albert Jacques Verly (1815-1883): the most loyal of them all, whose military career was suddenly cut short by the fall of the Empire. The appearance of a pair of epaulettes (€1,500/2,500), a sword belt (€600/800) and a pair of still immaculately polished boots (€1,500/2,000) belonging to him will surely fire the interest of those nostalgic for this bygone period.

The Cent-Gardes:
five key dates
24 March 1854
Creation of the Cent-Gardes cavalry squadron1856-1870
Colonel Verly in command17 March 1858
Increase in the guard numbers to 150, and of the minimum height to 1m801859
Participation in the military campaign in Italy.October 1870
Dissolution after the fall of the Empire.
HISTORICAL WEAPONS AND SOUVENIRS - DEBAECKER collection
Salle des ventes Favart - 3, rue Favart - 75002
Ader
Info and sales conditions
Catalogue
Results
Newsfeed
See all news
Massimo Osanna named new Director-General of Italian museums
Boris Johnson pledges £1.5 billion for UK arts and cultural organizations
British Royal Mint honors Elton John with new coin
Yale University acquires private collection pertaining to the life of Frederick Douglass
Not to be missed
Pre-sale
Female subjects
Women are in the limelight at this modern art sale, where a carved…
Pre-sale
The boy king and the virtuoso engraver
The meeting between the young Louis XIV and the sculptor Jean Varin…
Pre-sale
Superb tapestries from the Tchaloyan collection
Over fifty pictures in wool and silk dating from the 15 th to the…
Pre-sale
The flames of love that recall Versailles
Created in the late 18 th century, or more probably even in the…