This elegant pedestal table with its Far Eastern-style decoration reflects the Japanese vein popular in the 1870s. Produced by one of Paris's most specialised companies, it will soon be illustrating Marnyhac's achievements in Cannes. 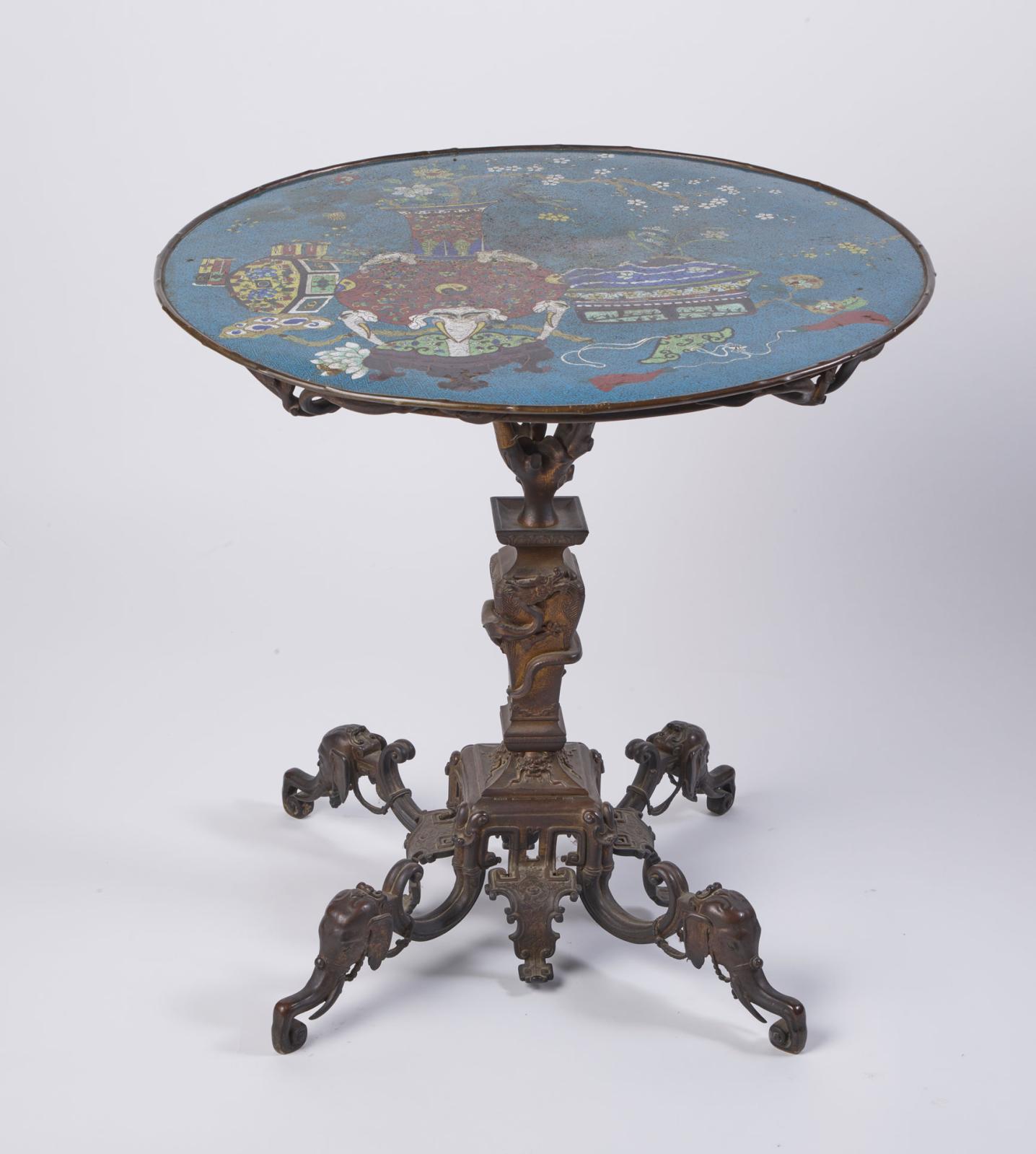 On the top of the table, three vases display their complex volumes, the largest containing a small flowering shrub. The scene in polychrome cloisonné enamel is supported by bronze branches emerging from a shaft encircled by a dragon. But the most appealing detail of this Japanese-style piece is its base, formed by four elephant heads that subtly echo the ones embellishing the vase on the top. An intaglio signature engraved on the shaft indicates the table's origin: "Maison Marnyhac, 1 rue de la Paix, Paris": one of the capital's leading interior decoration firms in the late 19th century. This was the trade name for the La Société des Marbres et Bronzes Artistiques de Paris (Artistic marbles and bronzes company) created by the dealer and artwork editor Charles de Marnyhac (1838-1897). Initially set up on Avenue de l'Opéra and later transferred to Rue de La Paix, the highly successful elegant store specialised in the production of luxury items, and closed in around 1910. Its founder, Marnyhac, established himself as a key player in the typically nineteenth century combination of art and industry, which introduced the latest artistic movements into opulent interiors. This pedestal table is obviously influenced by Japonism, the most popular of these trends during the 1870s and 1880s.
Like its competitors, Marnyhac called on the most representative sculptors of the time, meaning that Auguste Clésinger, Amédée Charron and Georges Clère provided models for a great many art bronzes. Excellent ornamentists like the highly eclectic Eugène Piat also produced memorable creations. Pieces often mingled Far Eastern elements (like the enamel pedestal table top) with mountings made in the Paris workshops. The object could then be produced in series with "trimming" variants; for instance, a small table identical to the one here, sold by Tessier-Sarrou at Drouot-Richelieu on 30 November 2012, differs only in the decoration of its top. Marnyhac was awarded a medal at the 1878 Universal Exhibition. In his book "Les Chefs d'œuvre d'art à l'Exposition Universelle de 1878", the critic Emile de Bergerat wrote enthusiastically: "Marnyhac's exhibition clearly showed me that Paris has two Barbediennes: two art manufacturers unrivalled in the whole of Europe."

Bruno Romeda, who died two years ago, will once again be present in Cannes with three sculptures illustrating his work on geometric forms and material. 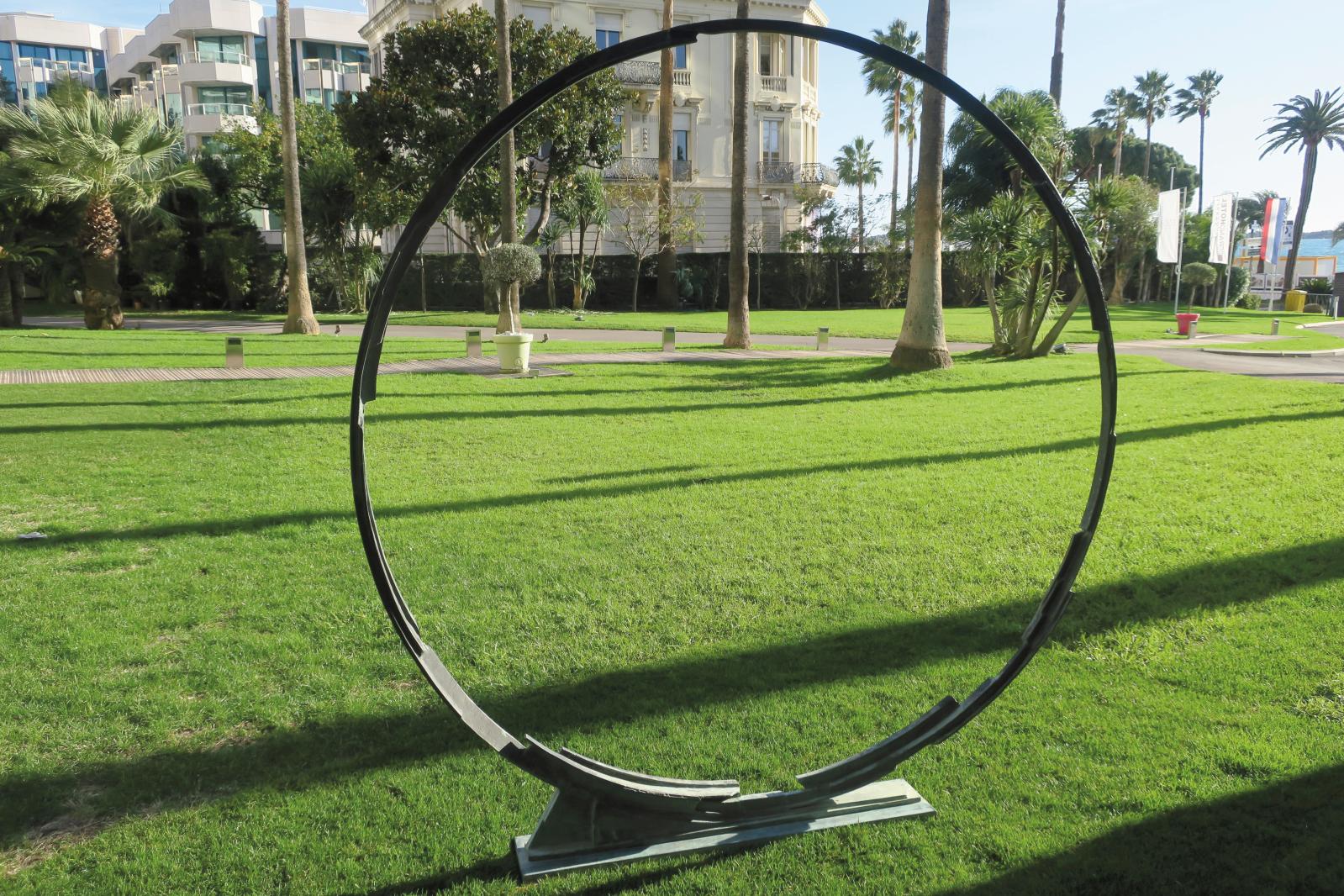 At the sale on 15 August, also with Besch Cannes Auction house, a 2009 216-cm-high Circle in bronze with a green patina was knocked down for €100,400. A record price for this Italian artist (born in Brescia), who had lived in a house in Grasse since 1956 with his companion, the American architect and visual artist Robert Courtright, whom he met in Rome at the art school they were both attending. Speaking of his work, the French critic Pierre Restany said: "What can one say about Romeda, apart from his fascination with the void, which never ceased to draw him, and which he confronted us with straight away, like a mirror." To give form to his geometric figures, Romeda used an assemblage of branches, twigs and bits of wood, which he then cast in bronze. His forms are elementary, almost primitive – mainly round, like this Circle, a one-of-a-kind piece bought by its current owner directly from the artist, but also four-sided and triangular, like a 2-metre high Square in bronze with an antique green patina (€35,000/40,000) and a Triangle of 1992, also in bronze with an antique green patina (h. 234,5 cm; same estimate), which both come from the Villa Manhattan in Mougins, formerly owned by a friend of the couple, jazzman Bobby Short. This rough, natural look intensifies his exploration of full and empty spaces, making play with the bevelled contours of the bronze, which is so thin and unobtrusive that its volume seems in doubt. Sculpture blends into drawing when the shadows cast by the structure make traces on the ground. Romeda applied this creative principle to furniture as well: seats, tables and stands, which he also made in bronze and exhibited, notably at the Dutko gallery in Paris. The artist is represented in institutions all over the world as well, including the Metropolitan Museum of New York, the Kasama Nichido Museum of Art in Japan, the Musée d’Art Contemporain in Nice and the Robert College in Istanbul.