Here Jean-Baptiste Greuze illustrated a common 18th-century practice: sending newborns to a wet-nurse in the countryside for fresh air. 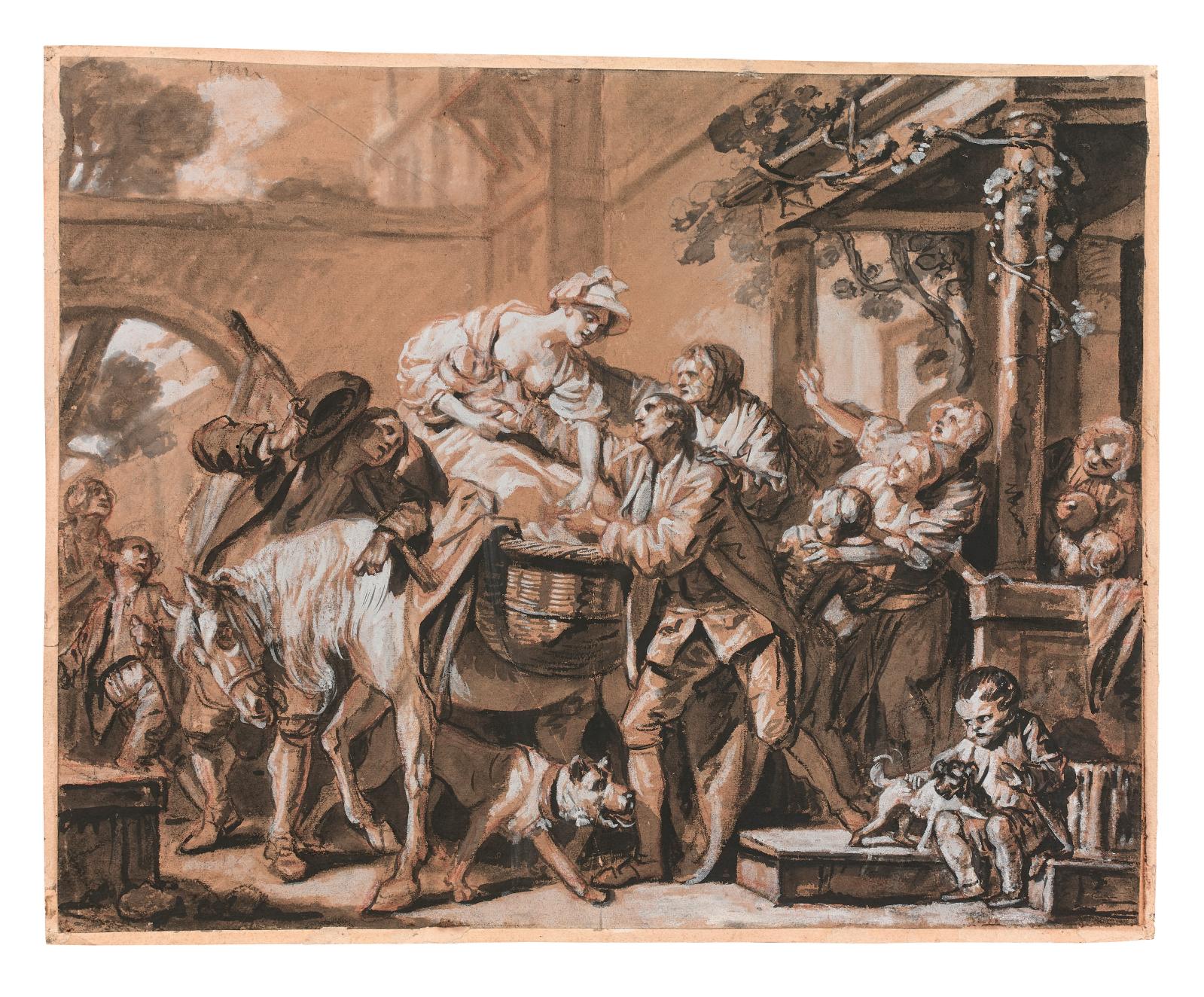 This work shows around 10 people gathered together to attend something resembling an event. At least at the family level. A wet-nurse, the composition’s central motif, plays the leading role, a child resting on her chest. This drawing, as well as a previous one, done in black and white pencil, which is in the Louvre Museum, and two prints, La Privation sensible (The Sensitive Deprivation) Le Retour de la nourrice (Return of the Wet-Nurse), depict a practice that was common at the time. Country life was considered healthy, so newborns were often sent away from their homes in cities. Greuze himself sent his daughter Anne-Geneviève (1762-1842) to the countryside with a wet-nurse and invited his friends the painters Pierre-Alexandre Wille and Gabriel-François Doyen to visit her together. The custom began in the 17th century and continued into the next one. Around 1760, however, it began to draw criticism.
Trained at the Paris Academy by Charles-Joseph Natoire, Greuze turned from ancient or mythological painting to family scenes with obvious moral overtones whose sentimentality won him praise from Diderot. The philosopher even deemed his Père lisant la Bible à ses enfants (Father Reading the Bible to His Children) a history painting comparable to Nicolas Poussin’s Sept sacrements (The Seven Sacraments).

FROM ESTATES OF THREE PARISIAN APARTMENTS AND DISCOUNT FUNDS - NON-CONTRACTUAL LIST - POSSIBLE CHANGES
Salle 2 - Drouot-Richelieu - 9, rue Drouot - 75009
Fraysse & Associés
Info and sales conditions
Catalogue
Salerooms
Results
Newsfeed
See all news
Due to the summer holidays there will be a pause in the newsfeed. We will be back Monday, August 24th. Have a wonderful summer vacation!
Met Museum in New York acquires Wangechi Mutu sculptures
US House of Representatives vote to create a national museum dedicated to Latin Americans
Church volunteer confesses to starting the Nantes Cathedral fire
Not to be missed
Pre-sale
Figurative art from van Goyen to Combas and the inescapable…
This 1955 work by Bernard Buffet belongs to a series of around 10…
Pre-sale
Henri Lebasque, painting the zest for life
His soft, nuanced palette captures moments of simple happiness on…
Pre-sale
The Gilles Labrosse collection: fashion throughout the…
Amassed by an impassioned enthusiast, one of the largest private…
Pre-sale
Achille Laugé: Cailhau in perspective
Found during an inventory carried out for an estate in the Var,…