This composition focused on Christmas – "Vanoce" in Czech – is signed by the Czech caricature and illustration icon Josef Lada: a draftsman and writer who is part of the national heritage. 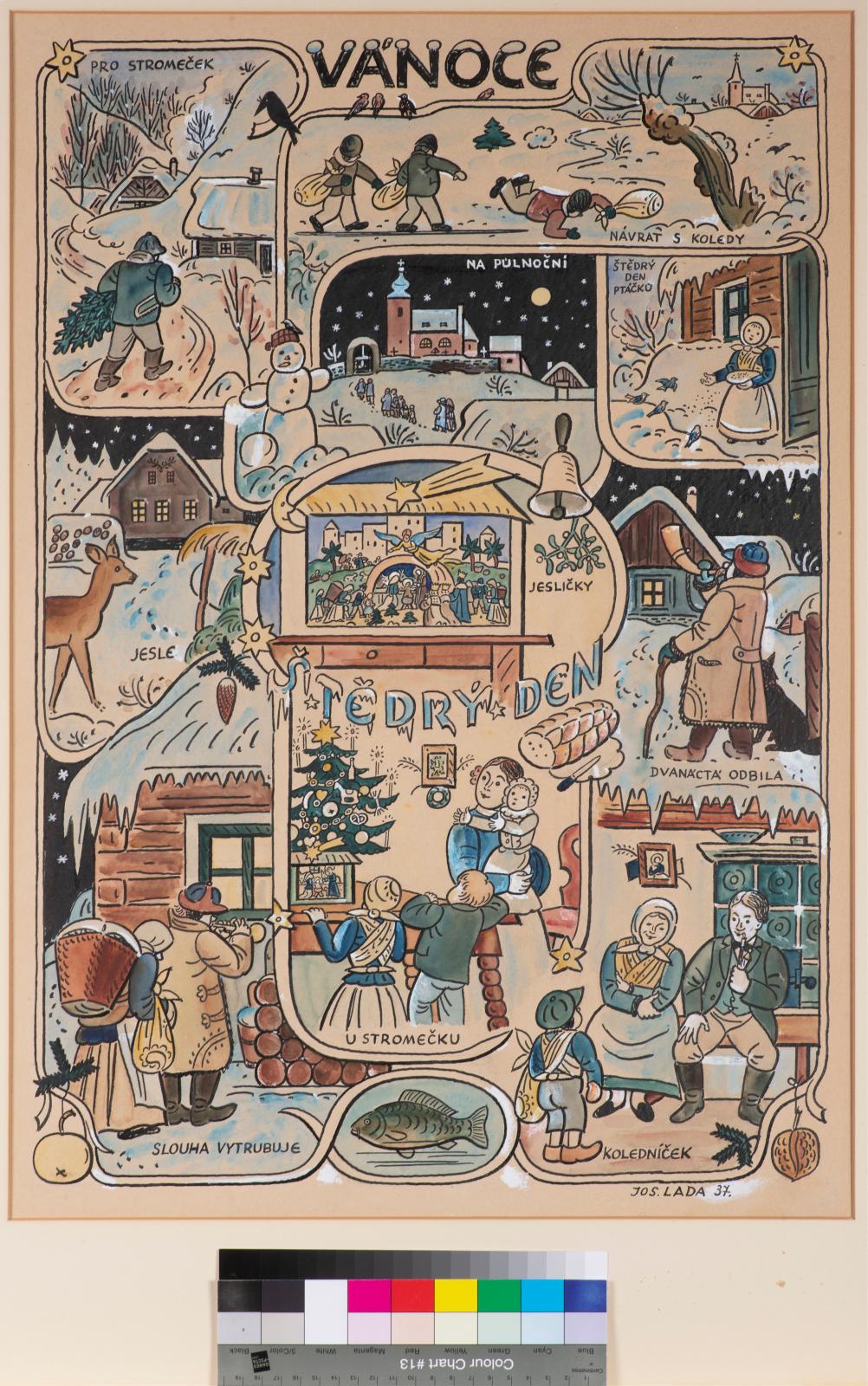 The entire Christmas spirit is encapsulated in these vignettes, where Josef Lada's characteristic style with its strongly defined contours and rounded figures evokes Czechoslovakia's end-of-year traditions. One of the most emblematic is the Christmas carp: people would slip one of its scales into their purses to ensure they had enough money throughout the coming year. The titles of each scene provide clarification – "Christmas shopping", "In the stomach", "The manger", "The trumpet players", "Coming back singing", "At midnight" and "A bird on Christmas Eve". This original drawing was used to illustrate the cover of the Czech daily newspaper Lidové noviny on 25 December 1937. We know of three other versions, the last of which, dated 1948, was used as a visual aid for national history lessons in schools across the country. Lada also reused some of his speech bubbles in separate gouache drawings and greetings cards. The piece is typical of the second half of the 1930s, when Lada abandoned his popular caricature style for the masterful linear stylisation found in the children's books marking the latter half of his career, and in his ultimate masterpiece – the illustrations for the satirical novel The Fateful Adventures of the Good Soldier Svejk During the World War, published all over the world. Today, Lada's original works are particularly successful, though they do not often appear at auction.

EVENING AUCTION 2019
Prague - Goetheho, 17-2 - 16900
Arthouse Hejtmanek
Info and sales conditions
Catalogue
Results
News feed
See all news
Planning for new museum dedicated to Le Corbusier begins
Virginia Museum of Fine Arts receives gift of over 8,000 Aaron Siskind photographs
Banker sentenced to jailtime for trying to smuggle a Picasso out of Spain
Domaine Royal de Marly museum, the Sun King’s hideaway, reopens
Not to be missed
Pre-sale
A new Ribera on the market
After Cimabue, Artemisia and the Master of Vyšší Brod, Paris is…
Pre-sale
The world revealed at last
This composite atlas printed in Nuremberg between 1753 and 1759…
Pre-sale
Picasso and the Minotaur
Through a complex iconography, Pablo Picasso exorcises his angst…
Pre-sale
The Brölemanns, Lyon bibliophiles
Kept in the same family until today, 260 works attest to the bibliophilic…