Belgium's remembrance of things past

Dating from the second half of the 19th century, this ivory group depicts the christening of Charles the Bold on 11 November 1433. The artist belonged to the Belgian school. 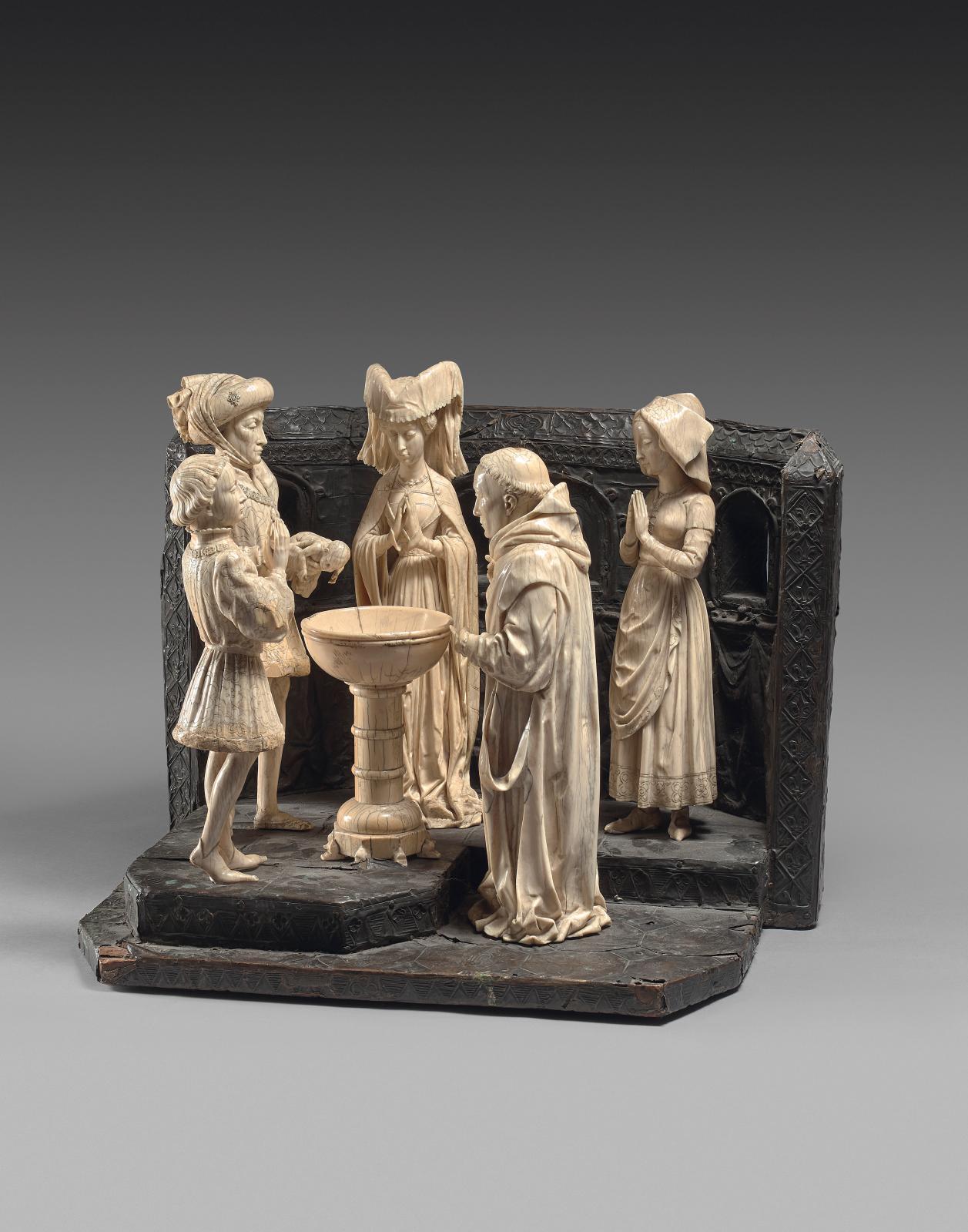 Belgian school, second or last third of the 19th century, Le Baptême de Charles le Téméraire (The Christening of Charles the Bold), group of six statuettes in ivory standing on a decoration of repoussé copper plaques on a wooden frame, h. 17 to 32 cm, 6.9 kg.
Estimate: €30,000/50,000

Belgian school, second or last third of the 19th century, Le Baptême de Charles le Téméraire (The Christening of Charles the Bold), group of six statuettes in ivory standing on a decoration of repoussé copper plaques on a wooden frame, h. 17 to 32 cm, 6.9 kg.
Estimate: €30,000/50,000

In a setting evoking a Gothic building, a priest offers the Blessed Sacrament to a baby held by his father, while his mother, a gentleman and a young woman look on beside them. This scene is based on the Seven Sacraments Altarpiece by the Flemish painter Rogier van der Weyden, executed between 1440 and 1445 for Jean Chevrot, president of the council of Burgundy for Philip the Good and Isabella of Portugal, canon of the collegiate church of Beaune and later Bishop of Tournai. We find the same attributes and attitudes as in the Romanesque version, like the child being lowered into the font. Philip the Good, who did not actually attend the ceremony, can be recognised here from his Golden Fleece collar, while his wife wears the blazon of the royal house of Portugal on her mantle. But though the figures wear the clothing of those times, several factors suggest that a historical event has been transposed to a later period: namely, in 1841, the entrance into Antwerp's Fine Arts Museum of the Seven Sacraments Altarpiece, bequeathed by Laurent van Ertborn (a collector and former mayor of the city), and the birth of a nationalist movement in the young kingdom of Belgium, which became independent of the Netherlands in 1830. A unique work with an unusual subject in a precious material with high-quality execution are all considerable assets for this object, which has an export visa.

dessins, tableaux, mobilier et objets d'art, céramiques, montres, Haute Époque, étoffes et costumes anciens, argenterie
Salle 14 - Drouot-Richelieu - 9, rue Drouot - 75009
Daguerre
Info and sales conditions
Catalogue
Salerooms
Results
Newsfeed
See all news
The artist residency Saint-Ange chooses its 2020 laureates
Luxembourg & Dayan and Venus Over Manhattan galleries join forces to open new space in the Hamptons
Guggenheim launches investigation into complaints of racism and mismanagement
Renaissance portraits together again after 125 years
Not to be missed
Pre-sale
Female subjects
Women are in the limelight at this modern art sale, where a carved…
Pre-sale
The boy king and the virtuoso engraver
The meeting between the young Louis XIV and the sculptor Jean Varin…
Pre-sale
Superb tapestries from the Tchaloyan collection
Over fifty pictures in wool and silk dating from the 15 th to the…
Pre-sale
The flames of love that recall Versailles
Created in the late 18 th century, or more probably even in the…