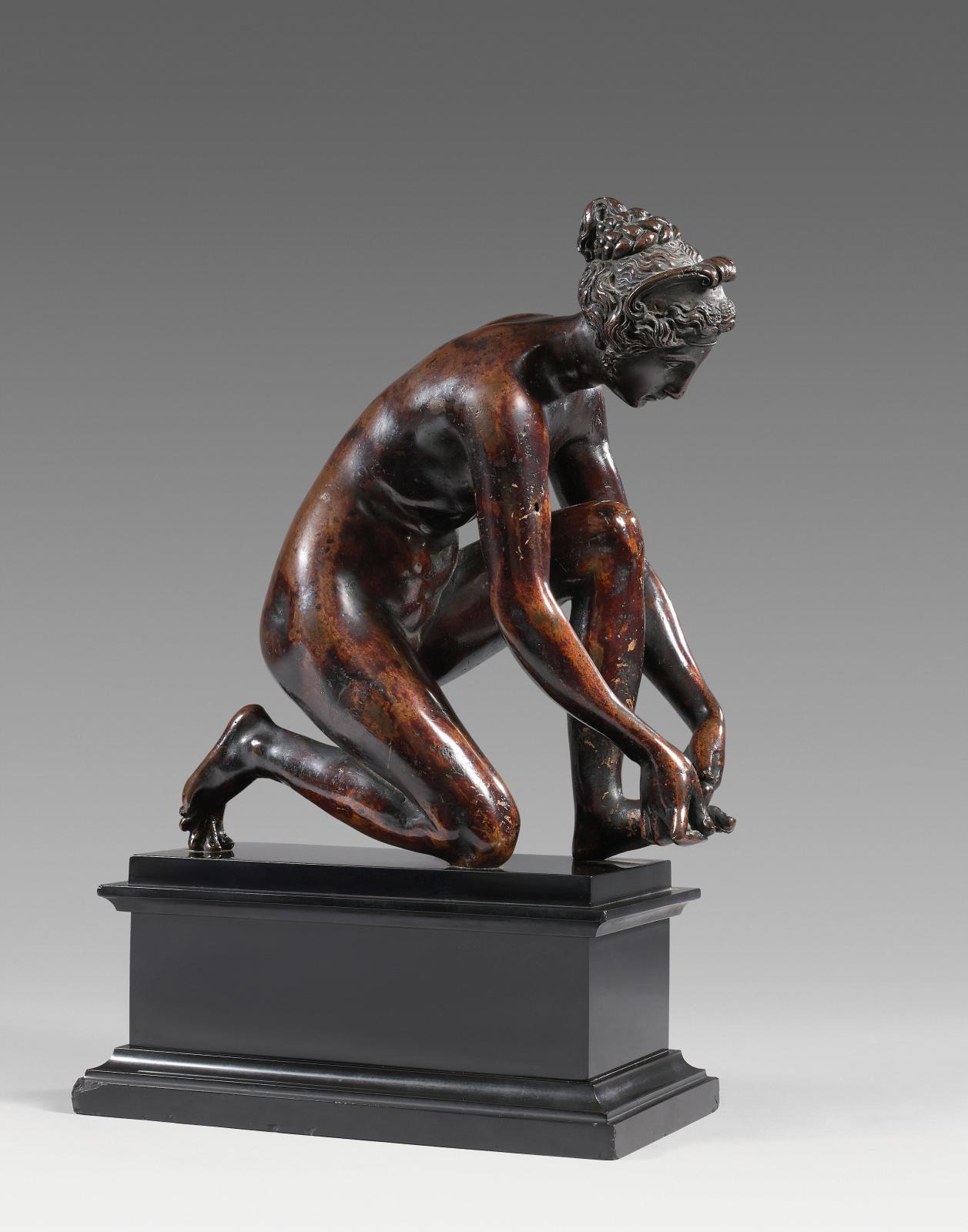 The elegant pose, slender proportions, small, neat, breasts and refined hairstyle make us forget that this statue harks back to an iconic model of Antiquity. Whatever the angle you see it from, everything in this bronze, right through to its luminous patina, expresses a harmony skillfully modelled by an artist long forgotten before he was finally recognised as one of the leading masters of the Renaissance: Ponce Jacquiot (ca. 1515-1570). This native of Rethel, in the Ardennes, was the only French sculptor cited by Vasari, no less! We know that he spent two periods in Rome: the first between 1527 and 1535, the second between 1553 and 1556. These naturally gave him the opportunity to admire antique statuary: not only many a delicate "Venus pudica" and of course the famous "Thorn-puller", but also the fresco painted by Raphael for Cardinal Bibbiena's bathroom, or at least Marco Dente's engraving of it. Jacquiot must have been inspired by one of these figures to model his famous terracotta thorn-puller. Long thought lost after being listed in the collections of François Girardon (one of the leading sculptors under Louis XIV) and the Crozat family, it was found in 1976 at an auction by a great discoverer, the dealer and collector Jacques Petithory, and bought by the Louvre four years later. In this city of the arts, Jacquiot also developed a liking for small bronzes designed for the private collections of art lovers. The practice was common in Italy, but extremely rare in France. So he agreed to have his charming young lady cast, bringing her into modern times. Girardon also owned a copy (possibly the one now in the Victoria & Albert Museum), as witness the inventory drawn up after his death in 1715. Did Jacquiot himself bring back any from his stays? History does not relate: but it does tell us that on his first return to France he collaborated with Androuet du Cerceau and Primaticcio on the Fontainebleau and Tuileries projects, and then worked on Henri II's funerary monument in Saint-Denis. For the king who died tragically during a tournament and famously nurtured a passion for the beautiful Diane de Poitiers, he designed two figures of virtues: Prudence and Temperance. He gave them the same regular face, wide-open eyes and slightly elongated form of the ideal model as his delightful Thorn-puller. And her charms have lost none of their appeal...

Boy with a Dog

This presumed portrait of Napoleon Bonaparte's great-great-nephew Giulio Rasponi by Enrico Pazzi, with its charming subject and natural pose, is reminiscent of The Prince Imperial with his dog Nero by Jean-Baptiste Carpeaux. 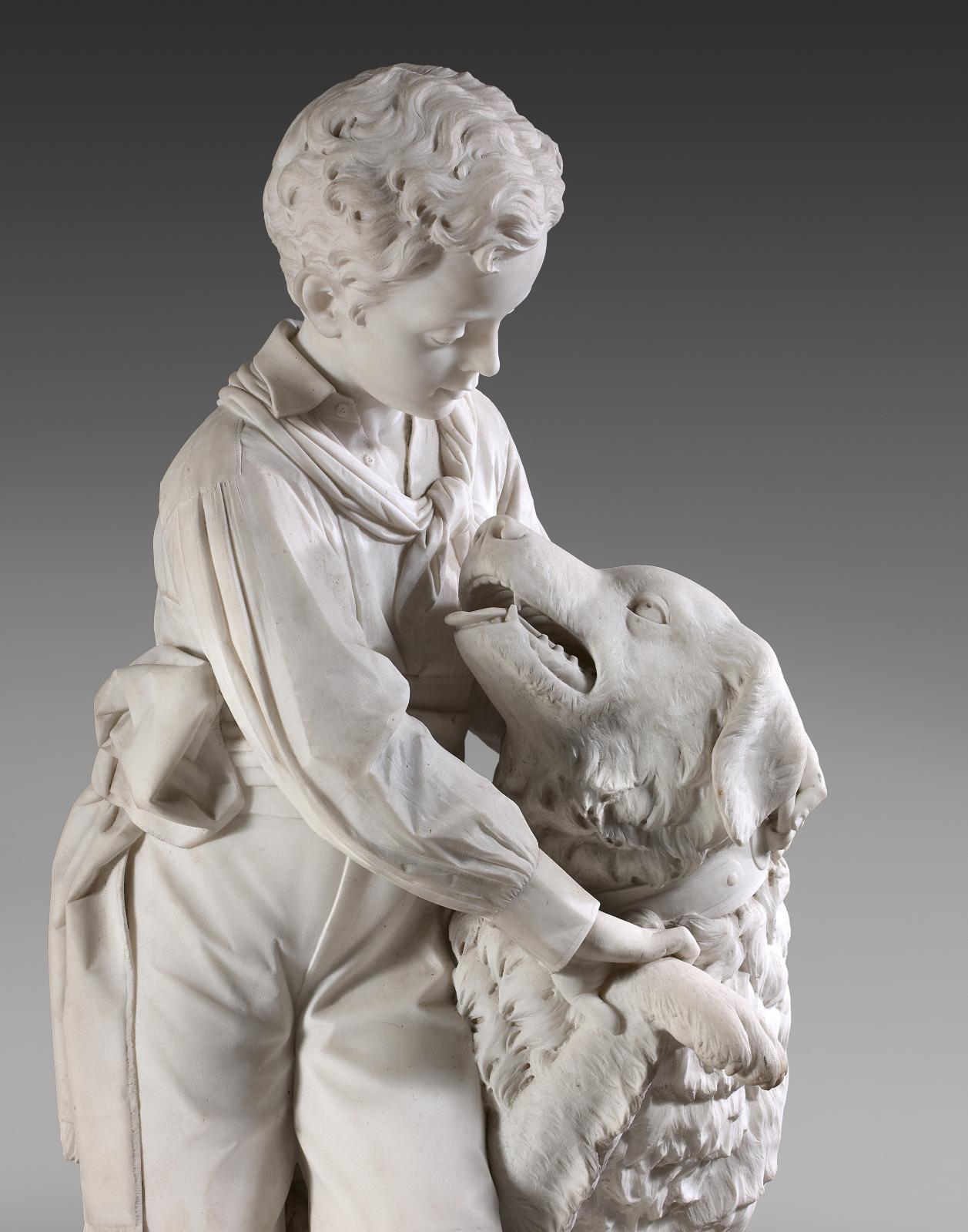 For sculpture lovers, this marble group is worth the detour for the refinement and energetic touch of the boy's clothing and his companion's coat, the delicate modelling and sweet expressiveness, not to mention the considerable size of this fine piece and its excellent condition. "There is a huge market for an appealing subject like this," says sales expert Jacques Bacot. Born in Ravenna, where he studied at the Academy of Fine Arts, the sculptor Enrico Pazzi earned his reputation with the monument raised to Dante Aligheri in the Tuscan capital's Piazza Santa Croce in 1865. According to a longstanding family tradition, the presumed model here is Giulio Rasponi (1863-1916), son of Gioacchino Rasponi and Constance Ghika, grandson of Louise Murat, and great-grandson of Caroline Bonaparte, Emperor Napoleon I's sister and wife to Joachim Murat. The work was commissioned in 1873 from Pazzi, a friend of the family. It was given to the Romanian princess Alexandrine Ghika, the boy's aunt and godmother, and this copy comes from her descendants. In 1881, the sculptor was asked by the boy's parents to execute a replica, which has appeared in the British art market.

Applause
A glance is enough to see the group's similarities with Jean-Baptiste Carpeaux's portrait of The Prince Imperial with his dog Nero. Introduced to the court by Princess Mathilde around 1863, the French sculptor became the drawing and modelling teacher of Emperor Napoleon III's only son. The following year, he received a commission for two portraits: one a bust, at the Empress's request, the other full-length, at the Emperor's. Carpeaux had the 8-year-old prince pose alternately with another boy, so that he could focus on the clothing and his hand resting on the collar of Nero, Napoleon's hunting dog. On 6 May 1865, the plaster was unveiled to great applause. It was such a success that different-sized models were produced in bronze, plaster, terracotta and biscuit. The marble version is now in the Musée d'Orsay.

DRAWINGS AND PAINTINGS - CERAMICS - OBJETS D'ART AND FINE FURNITURE - TAPESTRIES AND CARPETS
Salle 5-6 - Hôtel Drouot - 9, rue Drouot - 75009
Beaussant Lefèvre
Info and sales conditions
Catalogue
Salerooms
Newsfeed
See all news
Work Finishes on the Medieval Guildo Château on Brittany’s Coast
Never-Before-Seen Ceiling Painting by Eugène Lami Discovered at Château de Chantilly
Largest Ever Exhibition of Bob Dylan’s Artwork to Debut this November in Miami
Stockholm University Archaeologists Uncover Moat in the Viking Town of Birka
Not to be missed
Pre-sale
The Truly Sculptural "Crash" Watch by Cartier
Cartier's "Crash" watch is legendary for not only an extraordinary…
Pre-sale
Bernard Buffet in Amiens
Accompanied by a certificate of authenticity from the Maurice Garnier…
Pre-sale
Emile Claus Tames the Thames
Often classified as a painter of rural life, Belgian artist Émile…
Pre-sale
On the High Seas with Marin-Marie
Marin-Marie, an outstanding seascape artist, appears once more at…