The Flexibility of Rembrandt Bugatti’s Deer

Passing away prematurely, at the age of 31, Rembrandt Bugatti (1884-1916) left behind a rich body of work from his twelve-year career, comprising some 300 animal sculptures. 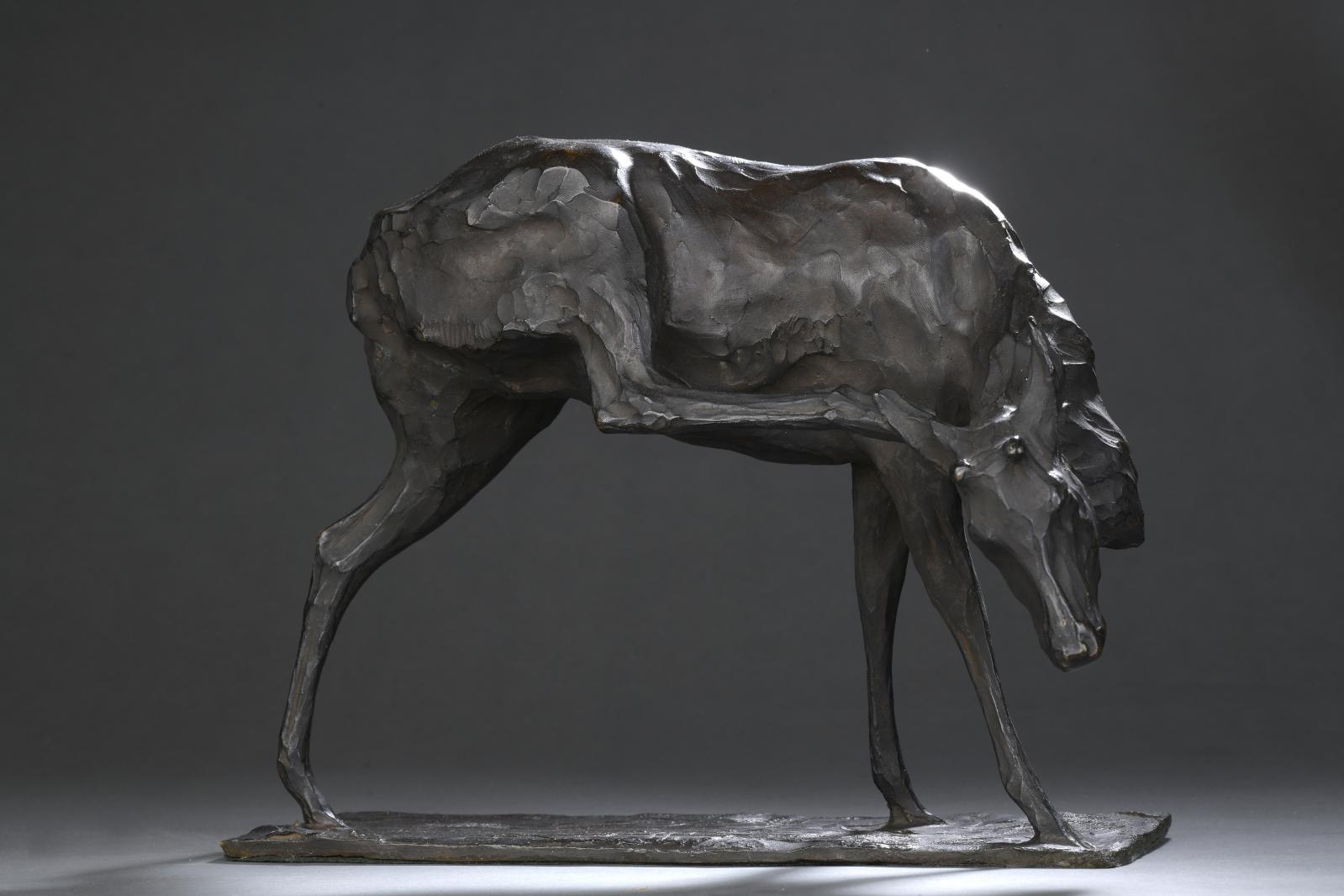 One of his favorite subjects was the deer, which he spent many hours studying during his daily visits to the menagerie at the Jardin des Plantes, in Paris, beginning in 1903, where he knew the animals by name. Perhaps this was the case for this Young Deer Scratching its Neck, in bronze, estimated at €100,000/150,000 up for sale by Oger-Blanchet at Drouot on October 27. An original statue from a series of just five works, the plaster cast of which is housed at the Musée des Beaux-Arts in Lyon, it bears the stamp of Adrien Hébrard. It was this caster who suggested that Bugatti number his bronzes: this piece is the second in its series. As ever, the animal is extraordinarily realistic. Bugatti was accustomed to working on the spot, modeling plastiline (a mixture of powdered clay and wax, which does not dry) onto wire frames. He demanded a lot of himself and only allowed a single attempt for each sculpture, or else he would destroy the entire thing and start from scratch.

Sculpted around 1906, this young stag scratching its neck comes from a limited run of five copies. It once again proves the genius of Rembrandt Bugatti and his fondness for these animals. 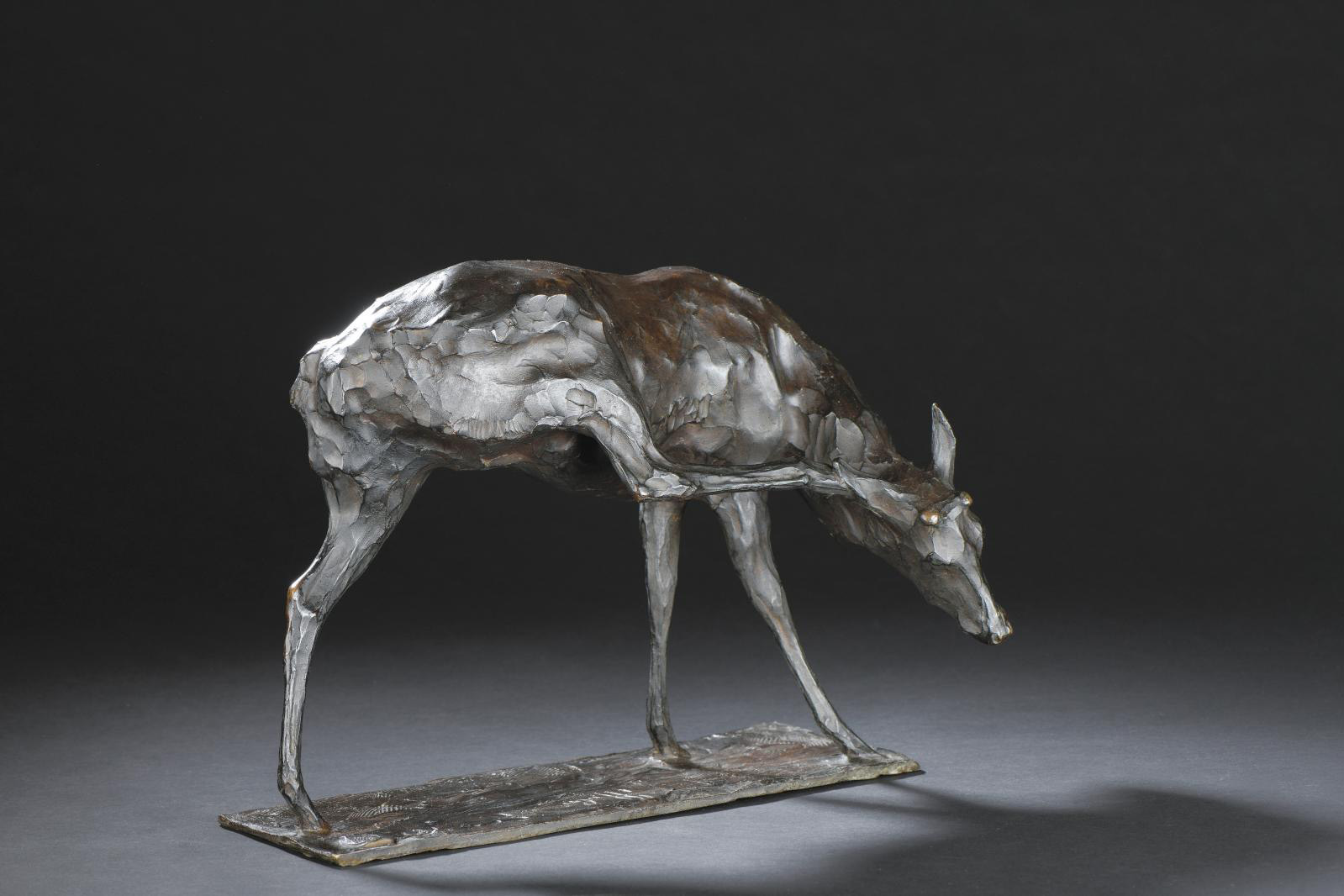 Far from the hieratic and quiet strength of his wild animals, which Rembrandt Bugatti started to sculpt as early as 1903, his deer are often represented, in groups or alone, in positions brimming with the gentleness, serenity and spontaneity. This one is engaged in everyday activity, and Bugatti’s bare-handed modeling technique contributes to the impression of lifelikeness. His visible touch causes light to vibrate on the deer’s coat. The artist’s works are not modeled but molded on the subject and keep the trace of his gestures, fingers and tools. Here, the state of the antlers, lost after the rutting season, suggests that the young stag was depicted in early spring.

Bugatti had a meteoric career. He died prematurely at the age of 31, ten years after exhibiting at the Salon des beaux-arts, where Rodin had noticed him. He nevertheless had the time to create true-to-life sculptures thanks to spending long hours observing wildlife at the Jardin des Plantes in Paris and the Antwerp Zoo, then the world’s largest. Born into a stimulating artistic family—his father was a decorator and architect Carlo Bugatti, his brother automobile designer Ettore—this eccentric, solitary dandy, whose roots were in Milan, was introduced to art at a very early age. His mentors were his uncle, part-Symbolist, part-Impressionist painter Giovanni Segantini, and Russian prince and sculptor Paul Troubetzkoy, a family friend.

This bronze belonged to Émile Chouanard (1861–1930) and his descendents. Chouanard, an engineer and head of the machine-tool business Les Forges de Vulcain, collected modern paintings, André Metthey’s ceramics and one of the world’s largest collections of bronzes by Rodin and Bugatti together in his Paris apartment on avenue Montaigne. In 1919 he gave a Bugatti elephant to the musée des beaux-arts in Rennes, which had housed his collection for safekeeping during the First World War.

Print the article
Newsfeed
See all news
First Major Donatello Exhibition in Nearly 40 Years to Open in Florence
French PCF Deputy Fabien Roussel Opposes the Sale of a Zola Manuscript
The "Printemps de l'Art Déco" Announces its Dates and Program
Preemption: The Art Nouveau Bench by Eugène Gaillard for the MAD
Not to be missed
Pre-sale
Jacques-Laurent Agasse and the Challenges of …
Jacques-Laurent Agasse, a brilliant animal painter, was born in…
Pre-sale
A Japanese-Inspired Clock
This particularly decorative clock illustrates the late 19th-century…
Pre-sale
Willem de Kooning, the Rejection of Styles
Unlike abstract expressionist painters, Willem de Kooning never…
Pre-sale
Emile Gallé, the Virtuoso Art Nouveau Gardener…
The thistle was one of Emile Gallé’s favorite themes. That should…