A Coachman by the Young Toulouse-Lautrec

A pen drawing by Toulouse-Lautrec featured in the estate sale of a former Drouot auctioneer. 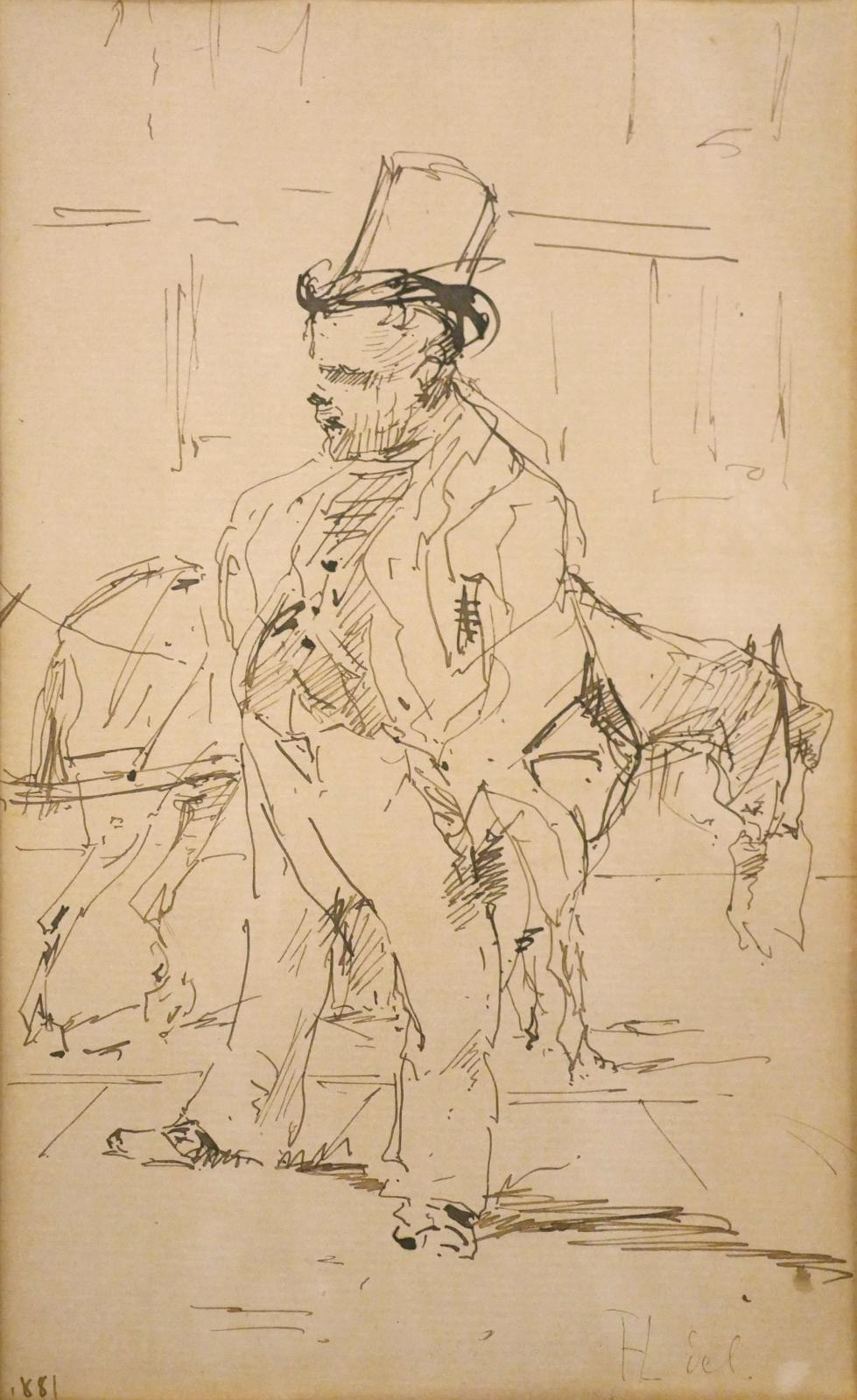 Michel Bivort (1904–1989), who replaced his father as a ministerial officer at Drouot in 1933, had the tastes of the cultured man of his time. He composed his apartment’s interior in the pure spirit of 17th-century stamped furniture, including a chest of drawers and a veneered dressing table by Pierre Roussel (1723-1782), objets d’art, display cases and works on paper by some of the leading names in modern art, such as this pen drawing by Henri de Toulouse-Lautrec depicting a coachman wearing his profession’s traditional attributes: a pair of clogs, a long coat (often tobacco-colored) for bad weather and the famous shiny black top hat allowing him to be seen from far away. Firmly planted next to his horse, he is waiting for a fare.

Toulouse-Lautrec loved horses, which is only natural since he grew up in a family of riders and hunters. In April-May 1881, when he was supposed to be studying for his baccalaureate examination, he went to Paris, where René Princeteau introduced him to painting. Princeteau, who also had a passion for horses as well as an interest in the British ideal of the sporting life, could hardly have asked for a better student than the eager-to-learn young man brought up in high society. In a letter to his uncle Charles the same year, Henri wrote that Princeteau had "lit the pencil spark" in him. At the age of just 17, when this coachman was drawn, he realized that he was born to be an illustrator. His aim was to be "truthful and not ideal". Throughout his career, his main focus was drawing, which allowed him to capture scenes and reveal the model’s psychology in a few brisk strokes. After failing the baccalaureate exam in Paris in June, he returned to Toulouse in October, where Princeteau, who clearly played a pivotal role in his life, convinced his parents to let him study painting in Paris. It is hard to imagine what would have happened if they had refused.

This pen drawing not only displays incredible artistry but also captures the grand boulevards of Paris, the city of light that drew Toulouse-Lautrec like a moth to a flame with its nightlife and entertainment venues, dance halls, cafés-concert, bars, circuses and theaters. Outside of these places, coachmen patiently awaited fares to take them home. This drawing speaks of a bygone era when horse-drawn carriages cluttered the streets of Paris. At their peak in 1900, there were 10,863 in the city compared to just 115 motorcars.

The drawing is covered with exhibition labels, including those of the 1931 show at the musée des Arts décoratifs (Museum of Decorative Arts) and another in 1945 at the Charpentier Gallery (Paris). Of course, it is reproduced in the "Dortu"—the artist’s catalogue raisonné. It fetched 1,220 francs (about €930 in today’s money) during the Romanelli Collection sale at Drouot on November 21, 1936. The work has everything it takes to start a new ride without fear of Paris traffic jams.