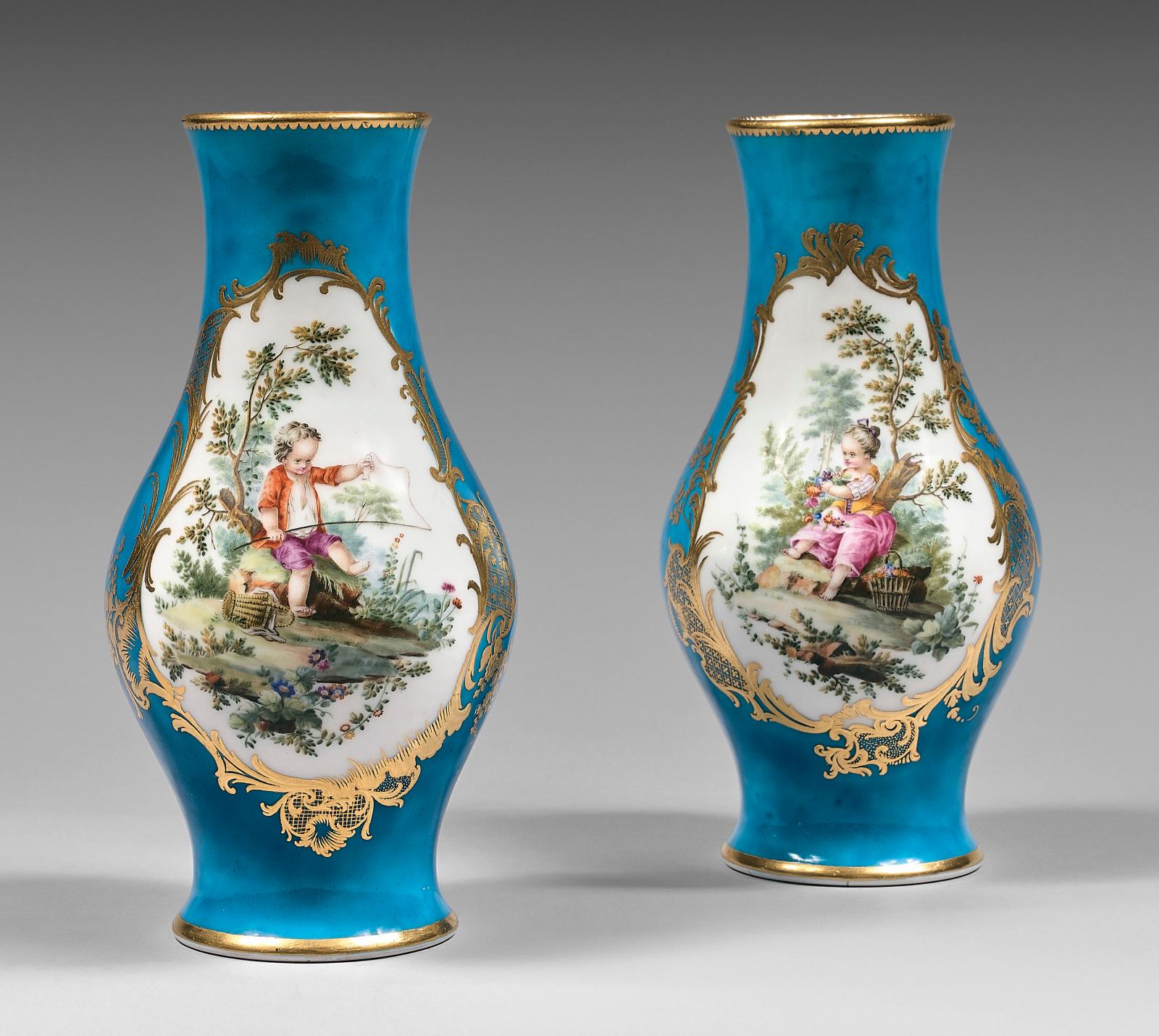 Nadine Ortiz-Patiño, with her mixed Lebanese-Syrian and Egyptian background, comes from one of those multicultural cosmopolitan families who are at home in every country. Although she had only stayed there occasionally, Paris was where she discovered the object of her future passion. While a student there, the 16-year old would visit antiques stores, and one day stopped short in front of a showcase with a pair of 18th century Sèvres biscuits, made under the supervision of Étienne-Maurice Falconet after François Boucher: "Le Tourniquet" and "La Lanterne magique". They now feature in the sale catalogue (€3,000/5,000, photo page 46). This anecdote, reported by the expert Hervé de La Verrie, marked the start of her love of soft paste porcelain from Vincennes and Sèvres, whose most noteworthy pieces she now tirelessly hunted down all over the world – particularly biscuit porcelain, ceramics with colour backgrounds, and decoration with birds: the three aspects that fired her most. The collector cultivated her passion in secret.

"A signature like "Sèvres" is a gauge of quality that has French buyers flocking, as well as foreigners from all over the world (…). Biscuit porcelain and colour backgrounds: the very quintessence of a factory, and the choice of an aesthete."

Cécile Dupont-Logié, Honorary Curator and President of the Friends' Association of the Musée National de Céramique.

Very few people have seen this group until now – and some of these fifty Sèvres and Vincennes porcelains have not appeared on the market for half a century! An asset enhanced further by their first-rate pedigrees. In a market known to be stable and non-speculative, demand does not exceed the offer, as collectors of the new generation have very precise requirements that include provenance and condition. For example, one pair of oval wine coolers comes from the service "à rubans verts" delivered in 1762 to the Marquis de Paulmy, Secretary of State for War, and later French ambassador to Poland, Saxe and Venice (€20,000/35,000). Meanwhile, the Comtesse du Barry's name is linked with a thrown water pitcher with a lid and basin, and decoration identical to that of a writing case now in the Château de Versailles, which the countess bought from the marchand-mercier Poirier in 1770 (€12,000/18,000). The glittering list includes other key figures like Alfred de Rothschild and Vicomtesse Vigier (Sophie Cruvelli), the great mid-19th century soprano.

Biscuit porcelain and "a celestial blue"
A group of "Érigone et Bacchus" (€3,000/5,000), a very rare model according to expert Hervé de La Verrie, and another of "Le Repos de chasse", after Falconet (€2,000/3,000), illustrate Nadine Ortiz-Patiño's genuine passion for this type of unglazed porcelain – which is certainly appealing, with a somewhat marble-like grain. They set off the brilliance of the "colour backgrounds", another Sèvres speciality, which were each given a special name when they emerged from the kiln, such as the "mottled" type seen in a pair of oval fruit bowls (€6,000/8,000). This group is incontestably dominated by a pair of vases with a celestial blue background, also exceptional for their very rare "antique urn" form (€30,000/50,000, photo page 45). They have an attractive decoration of children painted after Boucher by Vieillard, one of the Sèvres factory's leading artists, and their pedigree makes them even more desirable, as they once belonged to the famous Christner collection sold in New York in 1979. In a more classical vein, these matching "hollandois" (Dutch) vases illustrating village scenes after Teniers (€15,000/20,000) were given to the collector by her husband, Jaime Ortiz-Patiño. The latter, who was interested in 18th century furniture and objets d’art, was the grandson of Simon Iturri Patiño, no less: a Bolivian collector known as the "Rockefeller of the Andes". Meanwhile, Jaime's brother George is considered one of the world's greatest collectors of antiquities. A family that certainly inspires emulation… And though the collector has decided to part with all her French porcelains, it is to focus more fully on other fields of art and satisfy her insatiable curiosity.