Early in the 20th century, Maurice Utrillo established himself as the painter of the city. In his native Montmartre, he adopted an Impressionist approach to depict the urban environment he loved. 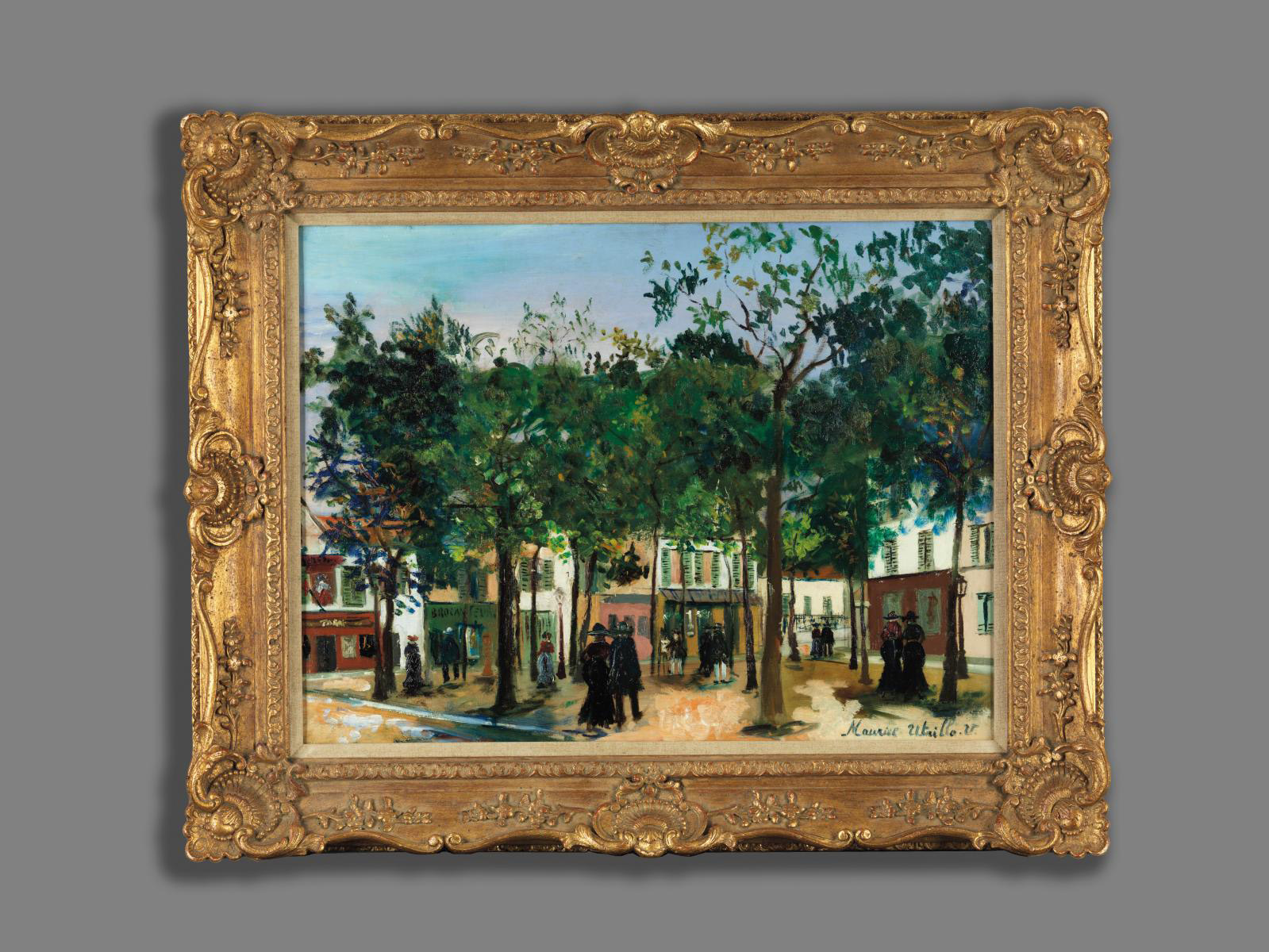 Utrillo was a son of Montmartre, where he was born on Rue du Poteau one day after Christmas. Probably inspired by his mother, the painter Suzanne Valadon, he made the Butte and especially the Place du Tertre one of his favorite subjects. Generally speaking, the urban landscape provided a pretext to use his talents as a colorist. Trees were no exception: his brushstrokes with bluish reflections gave form to a vertical light: a sun from which one willingly takes shelter in this Place du Tertre. Behind a modern touch leaning towards Impressionism, the drawing is sound. His urban views are not always free of human forms: here we recognize his typical female silhouettes with their short torsos and voluminous hips. Although in the middle of his "colorful" period, the painter liked dark atmospheres: his play on light gives rise to a dappled effect and clearly visible impastos.

Though he gradually escaped his demons and alcoholism, lightening his palette at the same time, he was still a tortured soul. 1922 was a significant year in his career, when the art dealer Paul Guillaume, who had discovered him in the 1910s through the poet Max Jacob, staged a large exhibition of 35 works that established him as a successful painter. This Place du Tertre, Montmartre was shown in 1942 at the Kunsthalle in Basel and in 2010 at the Sompo Museum of Art in Tokyo.

CATALOGUE V: Impressionists & Modern Art, 19th/ 20th century
Munich - 44, Schellingstrasse - D-80799
Hampel
Info and sales conditions
Catalogue
Newsfeed
See all news
We will be on vacation from July 23rd - August 23rd. Wishing you a great summer and see you in September!
Santiago Caltrava Renovates San Gennaro Church in Naples
50% Funding Cuts for Arts and Design Courses Approved by UK Government
Instagram’s New “Sensitive Content” Controls Cause Concern Amongst Artists
Not to be missed
Pre-sale
Under the Protection of Maahes: A Rare Egyptian Bron…
This well-sized bronze statuette dating from Egypt’s Late Period…
Pre-sale
The Op Art of Vasarely and the Discourse of Descarte…
This painting by the master of optical art has never come up for…
Pre-sale
Lalanne and the Charging Rhinoceros
This bronze sculpture with an enamel patina, which is from a private…
Pre-sale
From the Abstraction of Viallat to the Silk Paintings…
Two worlds will come together in Nîmes: those of Vietnamese painter…