To the sound of Vietnamese music

Mai Thu's work consists mainly of portraits of women and children. But now a rare horizontal composition of women singing, dancing and playing instruments is coming up for sale in Honfleur. 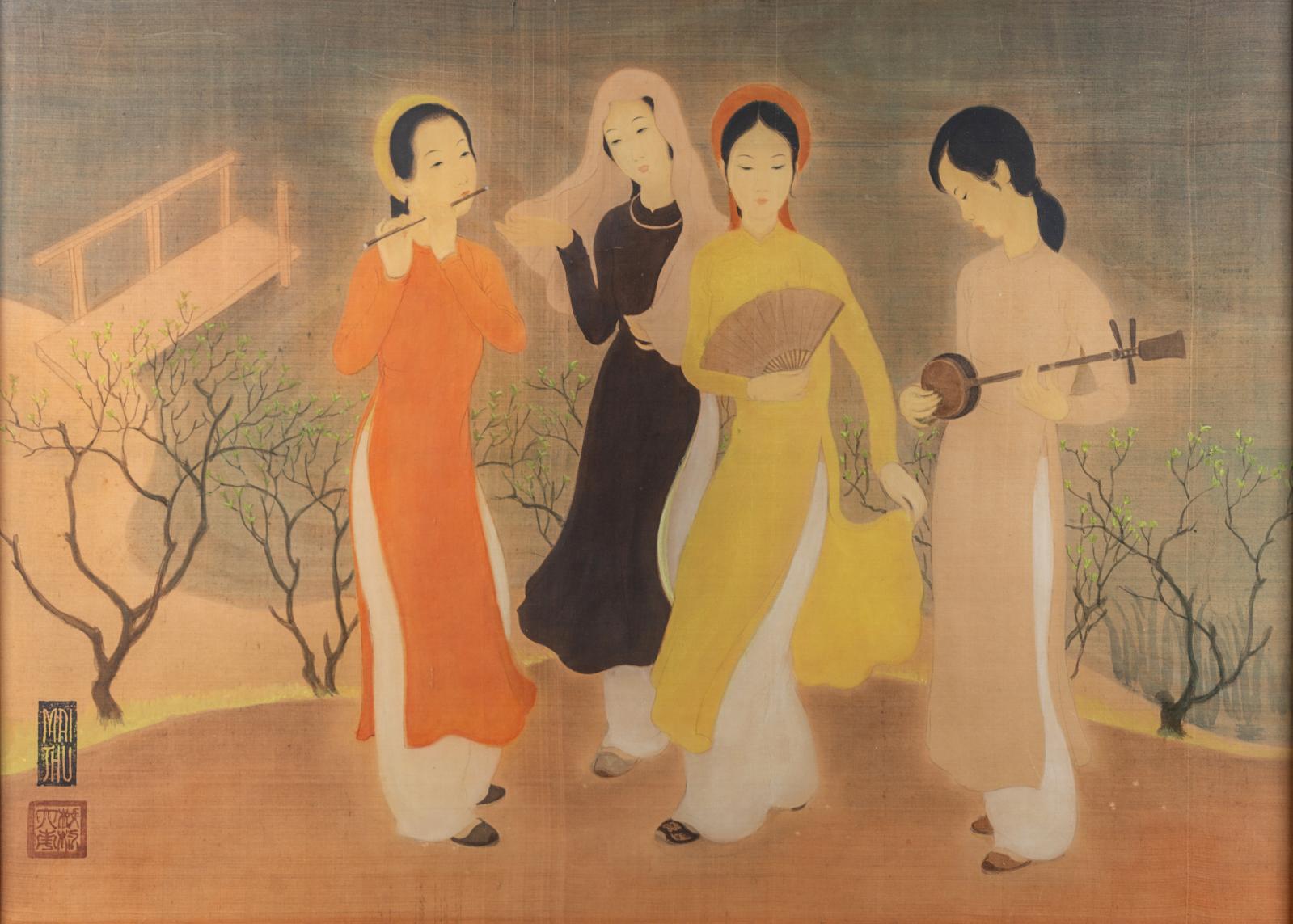 Bidding during the last two years has proved the immense popularity of this artist. As we remember, at Aguttes's sale on 26 March 2018 at Drouot, €297,080 went to a 1946 ink and colour painting on silk entitled Instant musical (A musical interlude). The same theme turns up again with this fine composition in browns focused on the colourful, undulating silhouettes of four women. It reflects the pleasant lifestyle in Vietnam, the country Mai Thu left in 1937 to attend the Exposition Internationale in Paris. He then decided to live in France. This was the start of a highly successful career for the painter, who graduated in 1930 as one of the first students at the Hanoi College of Fine Arts founded by Victor Tardieu and Nguyen Nam Son, then taught drawing at Hue. He rapidly achieved recognition for his works, which used a singular technique: painting on silk with further washes and frottage to soften the tones. But this multifaceted artist was also a photographer, film-maker and acclaimed musician, and regularly gave concerts playing the doc-huyen, a Vietnamese one-stringed instrument.

bijoux, montres, argenterie, tableaux anciens, modernes et contemporains, objets d'art, meubles anciens et de style, Extrême-Orient
Honfleur - 7, rue Saint-Nicol - 14600
Honfleur Enchères SVV
Info and sales conditions
News feed
See all news
New dates for the 35th Hyères Festival, in the South of France
Baltimore Museum of Art seeks to help the local arts community with $100,000 budget reallocation
Ancient Roman mosaic floor unearthed near Verona, Italy
The X museum slated to open this weekend in Beijing
Not to be missed
Pre-sale
From Carmontelle to the Val d’Osne
Initially planned for Sunday 29 march, this sale will be offering…
Pre-sale
As hours go by
Attributed to the Master of Luçon, this Book of Hours from the Beauvillain…
Pre-sale
By VCA
The beauty of natural stones by Van Cleef & Arpels in a set from…
Pre-sale
The Janine Saladin Collection
Around ten pieces of jewellery by Suzanne Belperron owned by a trailblazer,…