This monumental Art Deco timepiece in rock crystal, onyx and marble, with hands that seem to float as if by magic, was made by Cartier. 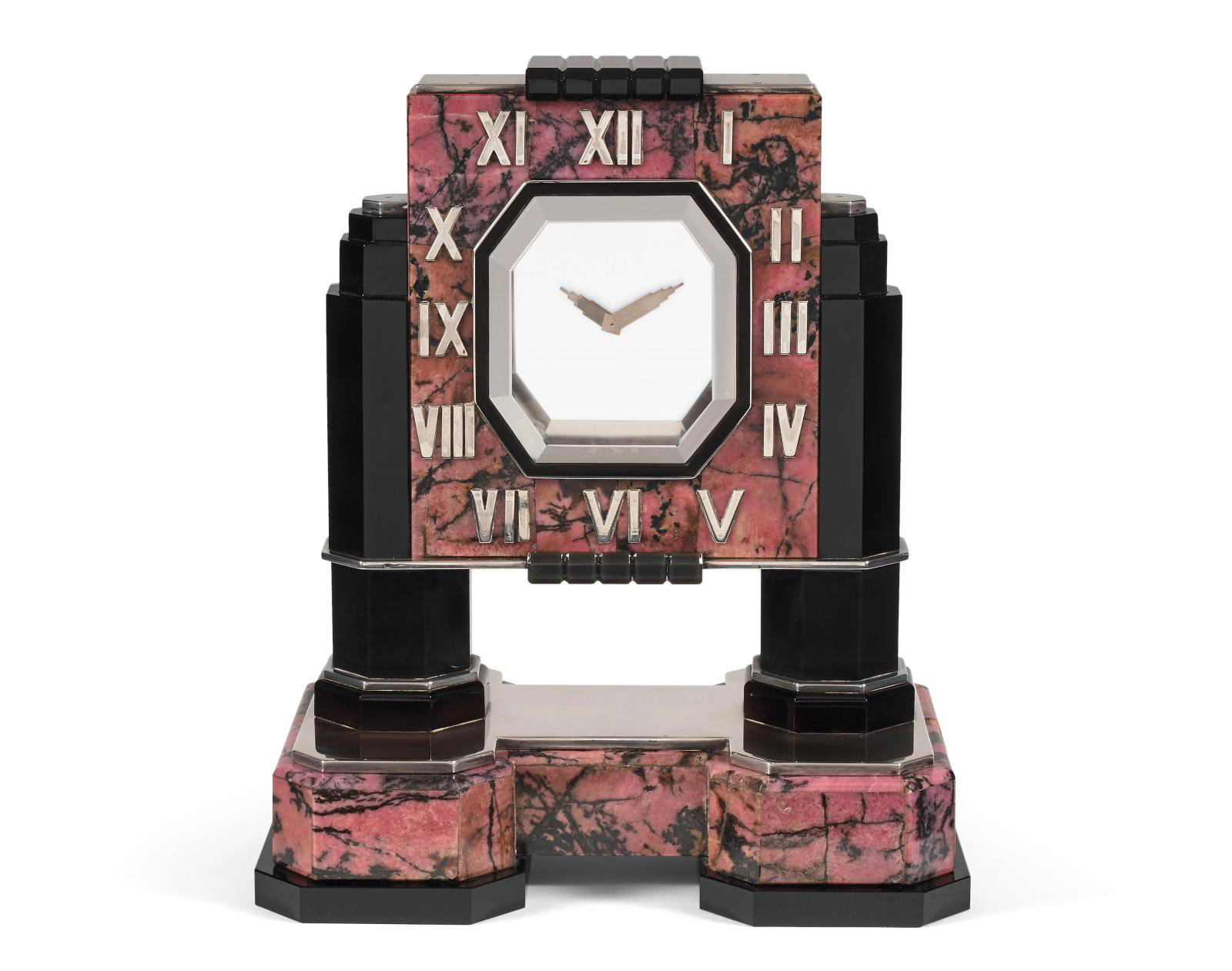 Its estimate reflects its dimensions, its rarity and the standing of one of its owners, Maurice Rheims (1910-2003). While this prominent Paris auctioneer, art historian and member of the Académie Française needs no introduction, the clockmaker Maurice Couët is less well known. In 1912, aged just 28, he followed in the footsteps of the illusionist Jean-Eugène Robert-Houdin and developed what became Cartier's legendary product: the "Mystery Clock". The hands are attached to a rock crystal disc with a serrated metal edge driven by a rack and pinion system hidden in the surround. As the disk rotates, the hands create the illusion that they are not connected to any movement, as this is hidden in the base.

About 90 clocks were made up to the 1930s, a few after the war, and a larger number in the 1970s—relatively speaking, of course. This one is the only known example of an object by Cartier in rhodonite (black-veined manganese basilicate). The production of these clocks required up to seven specialists, including a goldsmith, enameler, lapidary, engraver and polisher, and could take a year. This one makes clear reference to the Empire State Building, the famous New York skyscraper inaugurated in 1931, listed as one of the "seven wonders of the modern world", whose silhouette is repeated in the hands.

Bijoux et Horlogerie
118, rue du Faubourg-Saint-Honoré - 118, rue du Faubourg-Saint-Honoré - 75008
Piasa
Info and sales conditions
Catalogue
Newsfeed
See all news
“Vault by CNN": NFTs of Historic News Coverage to Go Up For Sale
Mexican Railway Development Slowed by the Discovery of 13,911 Pre-Columbian Remains
New York’s Callicoon Fine Arts Gallery to Close After Final Show
$2.7B distributed to 286 Arts Organizations by Amazon Stakeholder MacKenzie Scott
Not to be missed
Pre-sale
Fragonard's Poetic Vision
This vigorous watercolor from the beginning of the artist's stay…
Pre-sale
Utrillo's Montmartre
Early in the 20 th century, Maurice Utrillo established himself…
Pre-sale
The Artist Victoria Dubourg by Edgar Degas
This study by Edgar Degas for the Portrait of Mlle Dubourg , now…
Pre-sale
An Art Nouveau Ode to Nature by Alphonse Debain
Impressive for its decoration in the purest Art Nouveau vein, this…