Roger Godchaux's innate sensitivity is evident in this beautiful bronze of two lion cubs at play: a talent that made him one of the foremost 20th-century animal sculptors. 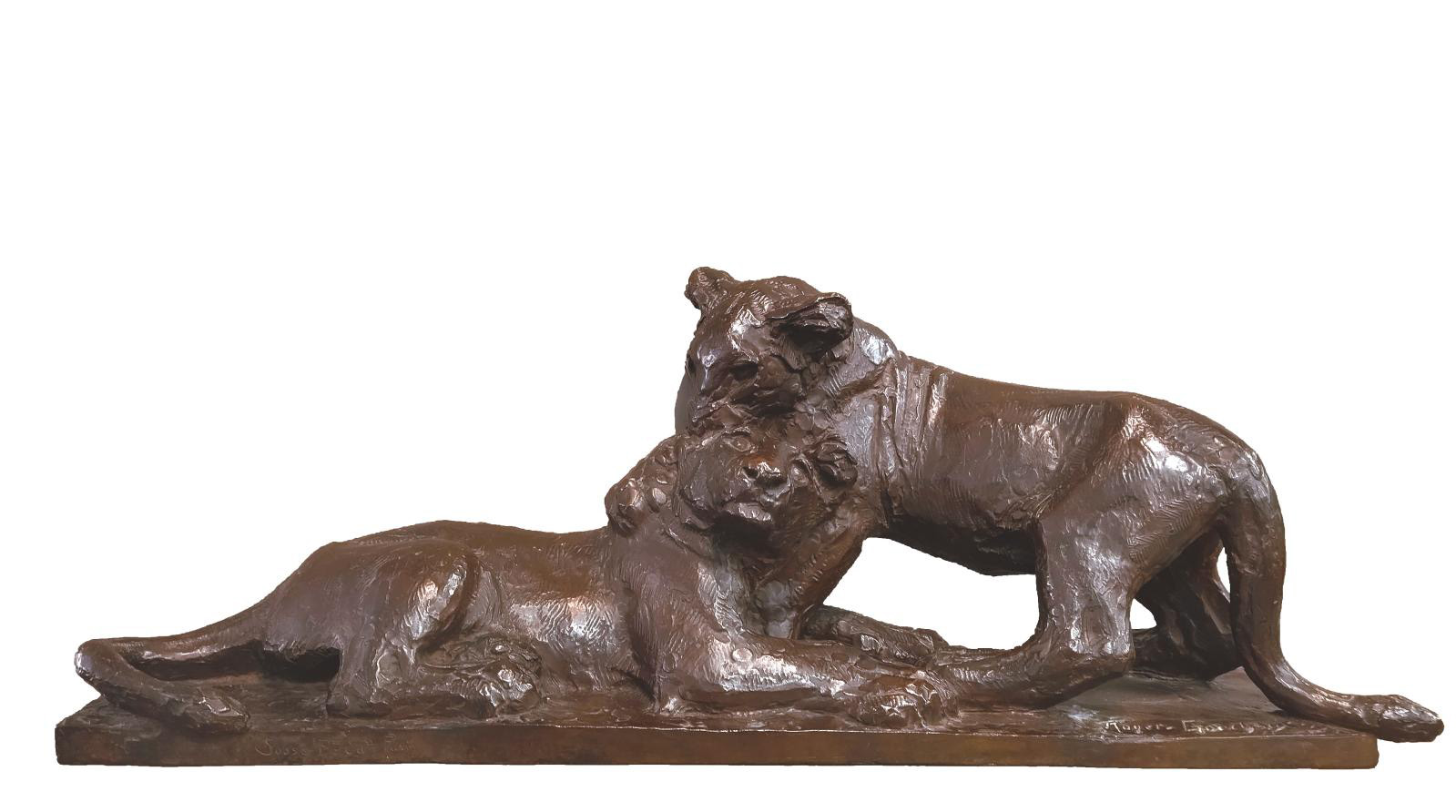 At the beginning of the last century, Roger Godchaux (1878-1958) worked alongside François Pompon, Gaston Suisse and Paul Jouve in the menagerie of the Jardin des Plantes in Paris. His naturalistic art, based on a keen observation of his models, earned him a bronze medal at the 1922 Salon of French Artists, then a silver medal at the International Exposition of Modern Decorative and Industrial Arts in 1925. The big cats soon became his favorite subjects, and he particularly liked to depict them in their daily lives—drinking, resting or playing, modeling their bodies in clay with oblique striations and smoothed areas that made for interesting material effects. Animal art rapidly found a skillful exponent in this man of intense sensibility from a Jewish family, whose father was an antiques dealer and whose mother was a pianist. After studying in Vendôme, he moved to Paris in 1894 and entered the École des Beaux-Arts. The academic technique he learned from his teachers, Jules Adler and Jean-Léon Gérôme, provided him with masterly skills, and he completed his training at the Académie Julian in 1896. Although he began to exhibit in 1905 at the Salon of French Artists, his career only took off after the Great War. In 1928, the French State bought a bronze elephant from him, and nine years later he signed a production contract with the Sèvres manufacture. Meanwhile, the Susse Frères produced his works in both bronze and terracotta.

Print the article
Newsfeed
See all news
Estate of Karl Lagerfeld is Going to Auction
Restitution, Nepal Seeks to Reclaim its Heritage
In Aubusson, the Cité internationale de la tapisserie Is Thinking Bigger
Tempera Work by Mark Tobey Approaches the Million Euro Mark
Not to be missed
Pre-sale
Jacques-Laurent Agasse and the Challenges of …
Jacques-Laurent Agasse, a brilliant animal painter, was born in…
Pre-sale
A Japanese-Inspired Clock
This particularly decorative clock illustrates the late 19th-century…
Pre-sale
Willem de Kooning, the Rejection of Styles
Unlike abstract expressionist painters, Willem de Kooning never…
Pre-sale
Emile Gallé, the Virtuoso Art Nouveau Gardener…
The thistle was one of Emile Gallé’s favorite themes. That should…