In Saint-Jean-de-Luz, with several works, the artist will be heading a fine selection of Basque painters who also include Louis Floutier, René Choquet and Mauricio Flores-Kaperotxipi. 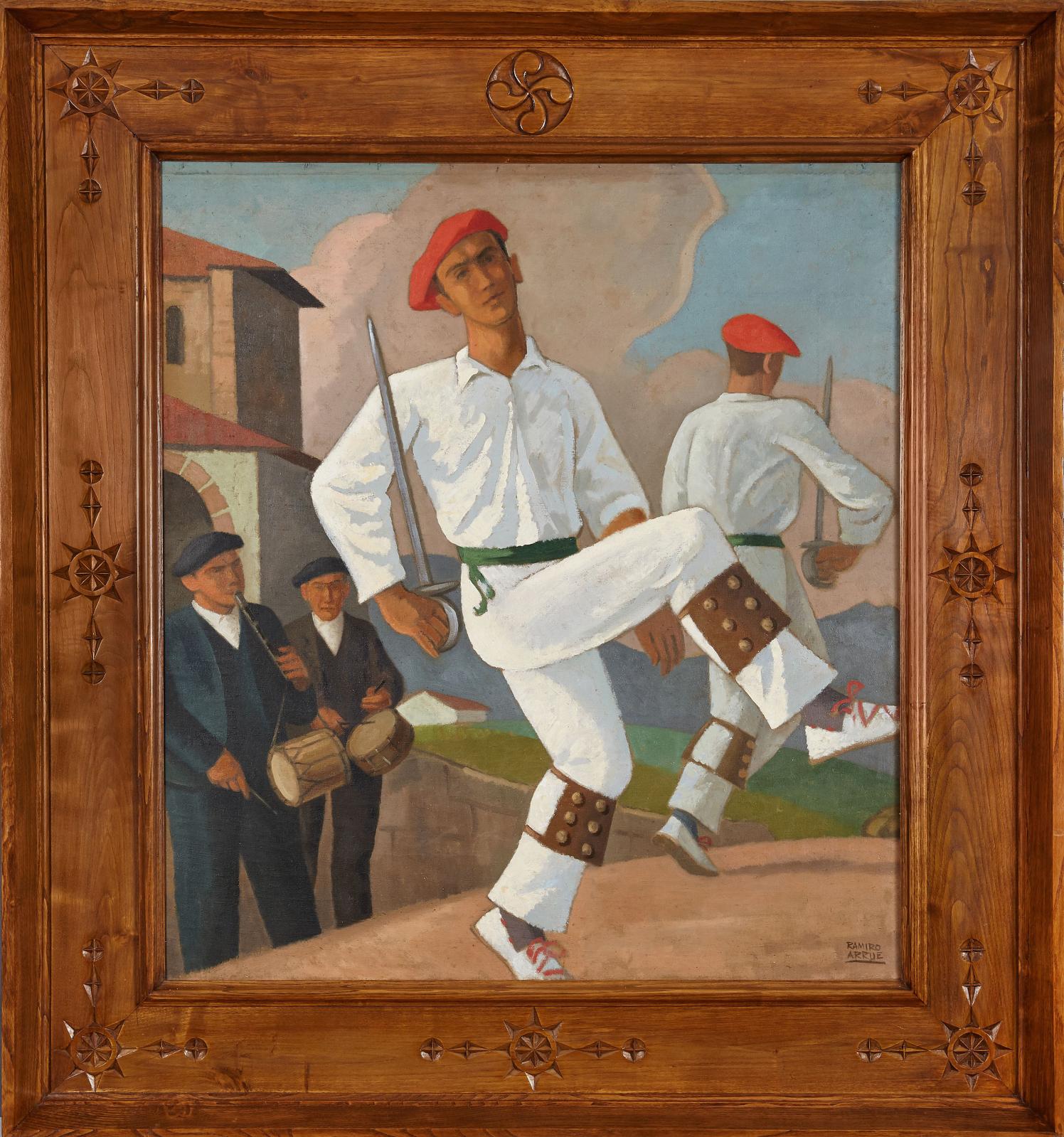 When you see the works by Ramiro Arrue on offer at this sale, you can understand why Basque painting collectors are so keen on this artist. For example, with Sword Dancer, he focuses on a typical regional folk scene. These traditional dances, performed in a chain, are more like commemorations than warlike expressions, even if the men execute some impressive leg movements. But Ramiro Arrue did not only depict a traditional scene illustrating the customs of his country: he created a totally new composition for this type of representation, bringing the white-clad dancer into the foreground while merely hinting at the Basque architecture. He thus gives the scene a monumental feel, simultaneously stylised and dynamic, totally in line with the Art Deco movement. The painting also has an oak frame carved in the regional style. Other works by Arrue include Unloading the Catch, an oil on panel expected to make €25,000/30,000; a Village Square in the Basque Country; a gouache at €6,000/8,000, and a touching portrait, Le Txistulari, painted in oil on paper (same estimate), all providing a chance to acquire a work by this iconic painter, one of the most sought-after in the market. With his three brothers, also artists, Arrue began to champion Basque art throughout the world early on in his career. Born in Bilbao, in 1915 he moved to Saint-Jean-de-Luz and then Ciboure. In 1922 he founded the Basque Museum in Bayonne with Veyrin and Commander Boissel. Commissions poured in from France and abroad, and he even went on a highly successful tour in South America.

BASQUE & LANDAIS ARTS
Saint-Jean-de-Luz - 8, rue Dominique-Larréa, Z.A. Layatz - 64500
Côte Basque Enchères Lelièvre - Cabarrouy
Info and sales conditions
Catalogue
Newsfeed
See all news
We will be on vacation from July 23rd - August 23rd. Wishing you a great summer and see you in September!
Santiago Caltrava Renovates San Gennaro Church in Naples
50% Funding Cuts for Arts and Design Courses Approved by UK Government
Instagram’s New “Sensitive Content” Controls Cause Concern Amongst Artists
Not to be missed
Pre-sale
Under the Protection of Maahes: A Rare Egyptian Bron…
This well-sized bronze statuette dating from Egypt’s Late Period…
Pre-sale
The Op Art of Vasarely and the Discourse of Descarte…
This painting by the master of optical art has never come up for…
Pre-sale
Lalanne and the Charging Rhinoceros
This bronze sculpture with an enamel patina, which is from a private…
Pre-sale
From the Abstraction of Viallat to the Silk Paintings…
Two worlds will come together in Nîmes: those of Vietnamese painter…