Christian Fjerdingstad: a comet in the Art Deco sky

His luxury object collection is about to make its debut in the auction room at Drouot, revealing its Scandinavian roots. 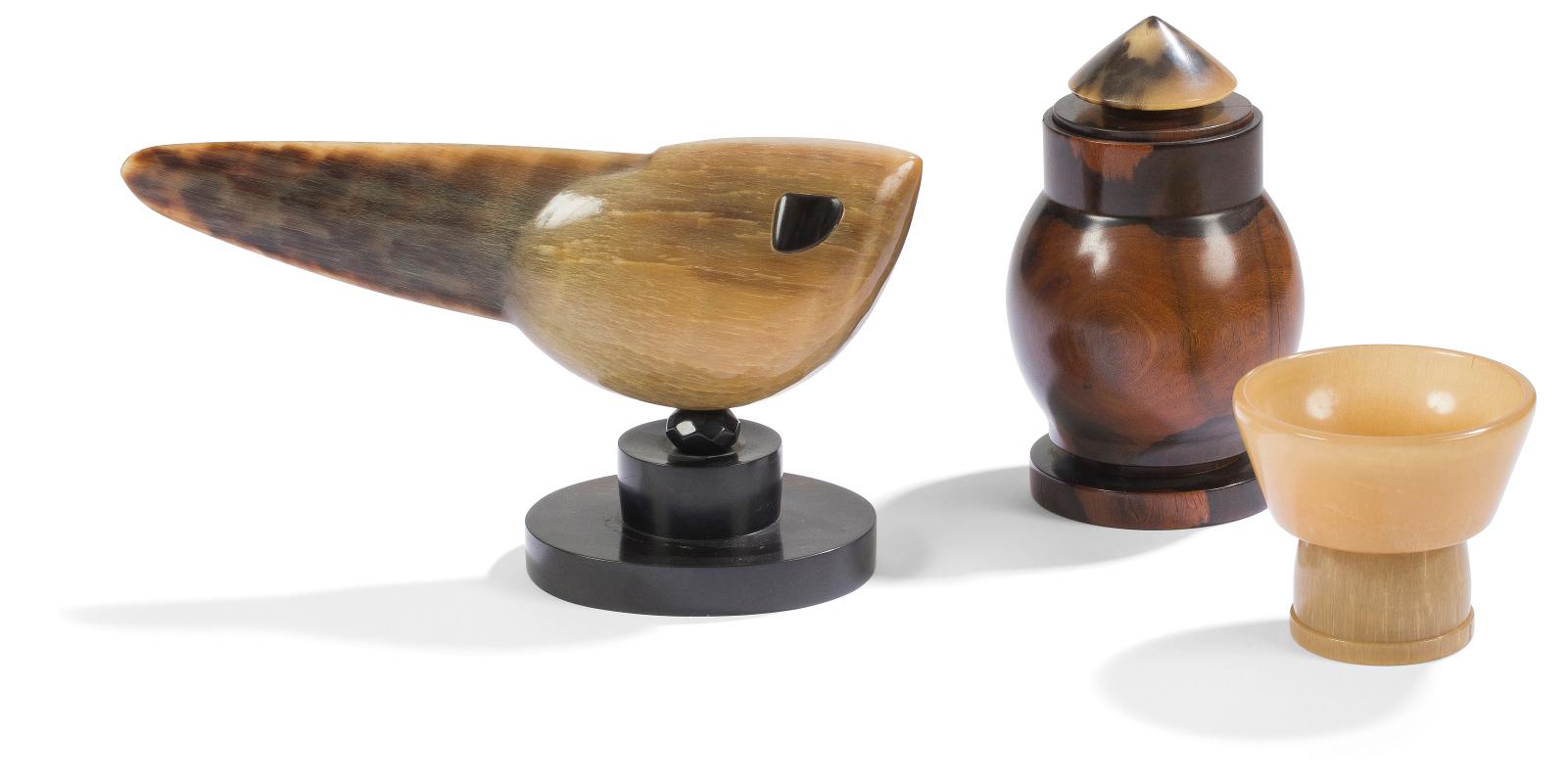 Danish designer Christian Fjerdingstad (1891-1968) had a sense of sobriety that developed on the rocky island of his childhood: Christianso in the Baltic, covering barely twenty square kilometres, where his father was the lighthouse keeper. Minerality soon became his field, and the sea his sole horizon. This explains why the marine world features so prominently in his creations. Subsequently, when his father was posted to less austere places like the island of Bornholm and the beaches of Jutland, the boy continued his explorations, collecting driftwood, shells and amber pebbles. Later, he turned to blond horn and ivory before discovering narwhal tusks: all totally new materials that stimulated his fertile imagination and set him on the road to art. He eventually became one of the most gifted exponents of Danish Art Deco.

Alongside the Avant-garde
The young Fjerdingstad was first apprenticed to a regional silversmith. When he discovered Georg Jensen's work, he was fascinated, and set off to Copenhagen in order to learn from him. But he felt ill at ease in the capital and left to set up a studio in Skagen. It all came to a stop when the First World War broke out, and his political commitment led him to join the Foreign Legion to fight alongside the French. After being seriously wounded, he received treatment and was invalided out, after which he settled permanently in France. He met two good fairies in the form of Fernand Léger, his neighbour in Fontenay-aux-Roses, and the famous couturier Jacques Doucet. The latter discovered the Danish designer's work at the 1921 Salon d’Automne, and became his first buyer. "You've sold a piece to Doucet? You're well on the way now," said his friend Léger. His work chimed in with the new aesthetic now gaining power: Art Deco. "The artist thoroughly absorbed it while losing nothing of his Scandinavian culture," says specialist Emmanuel Eyraud. This blend can be seen in sculptures, bowls, boxes and candlesticks where the purity of Nordic lines was expressed in the totally new materials favoured by the movement. In 1924, the company Christofle, a leading light in modernism, commissioned him to design its new collection. This was a sensational success at the famous 1925 exhibition, where his works in silver, often made with natural components, formed the focus of the stand and compared brilliantly with the work of Jean Puiforcat, Georg Jensen (the much-admired master) and Gérard Sandoz. The innovative formal vocabulary of these pieces established them as luxury items, and they were later marketed in silver-plated metal versions under the Gallia brand. The silversmith company financed the installation and organisation of the workshop at L’Isle-Adam, where Fjerdingstad decided to work. The partnership, which ended in 1941, lay behind the finest years in the careers of both great names, says Anne Gros, manager of the Christofle Museum and archives, which has eighty-one of Fjerdingstad's pieces. An apogee also illustrated by this pair of four-light candlesticks with a central narwhal tusk (€20,000/30,000).

Market Debut
The lots proposed in this auction come from the family, and have never appeared on the market before. They have particularly intimate connections, as Fjerdingstad had kept them in his personal collection. There are not very many of them – no more than thirty-odd – and are apparently utilitarian: small in terms of size but impressive in the simplicity of their pure, fluid lines and use of precious, hard-to-work materials, "all modelled and polished with considerable dexterity”, says the specialist. Their refinement links them with works by designers like Eugénie O’Kin (1880-1948), Henri Simmen (1880-1963) and Georges Bastard (1881-1939). Unsurprisingly, these personal objects include no fewer than ten fish. None can be identified; all of them evoke the world of the sea, whether one sculpture in blond and brown horn with an ebony pedestal (€4,000/6,000), another carved from red amber, mounted in silver on a horn base (€5,000/8,000), or a free-standing piece in engraved horn (€2,000/3,000). They all clearly hark back to his native island.

Printz and Dunand: when Baroque rhymes with minimalism

Provenance, size, top-quality workmanship and highly original decoration all come together in this wood and metal cabinet by Eugène Printz and Jean Dunand. 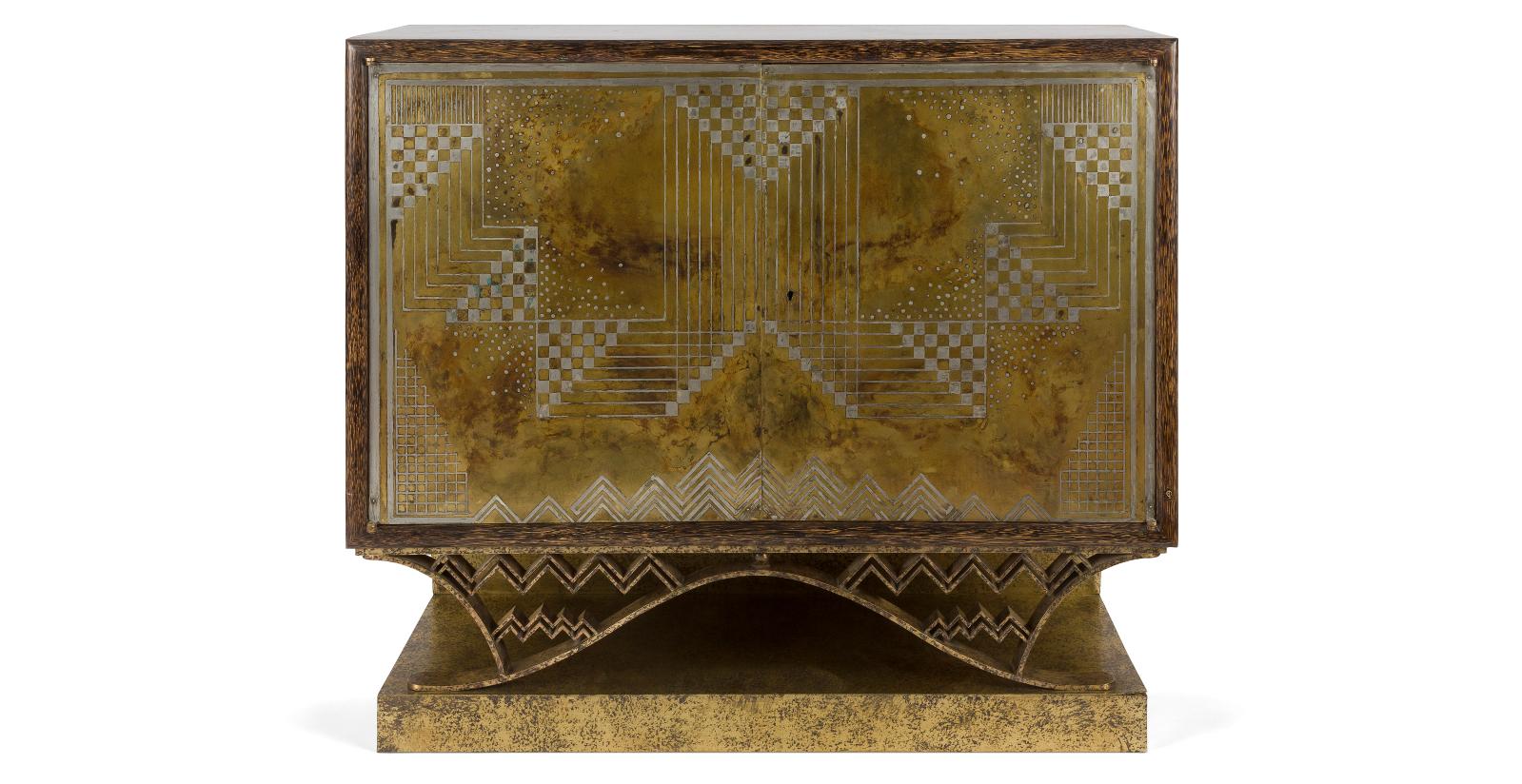 Whether or not unique, this sitting room cabinet is the only one we know of today. We also know that pieces by this cabinetmaker born in the Faubourg Saint-Antoine, the son and nephew of cabinetmakers, were produced in extremely limited series. This one was commissioned by a friend and business acquaintance of Eugène Printz (and invoiced on 18 May 1934). The cabinet, now being sold by the son of this French exotic wood importer, came from a complete set of furniture designed and made by the artist. Apart from its unusual small size, it has impressive and appealing decoration, where the design on the doors responds to the broken lines and chevrons of the base. The façade is ornamented with brass dinanderie plaques featuring inlaid cast silver geometric motifs, which follow on continuously like a painting. While metal, a key component in Printz's work, appeared in 1927 at the Salon d'Automne with a cabinet in polished kekwood with folding sliding doors decorated by Jean Dunand, it is less common than animal and figurative decorations in lacquer. After 1927, Printz abandoned tulipwood in favour of more ordinary wood varieties like walnut and rosewood, or more precious kinds like kekwood, ebony and above all palm. This required a highly specialised technique. As the blocks of wood were only twenty-odd centimetres in diameter, only the heart could be used, in the form of sawn, not peeled veneering of one or two millimetres, subsequently polished with a fine plane. A challenge met with ease by the perfectionist Eugène Printz, but which significantly raised the price of furniture – today, as yesterday.

arts décoratifs et sculptures du XXe
Salle 5 - Drouot-Richelieu - 9, rue Drouot - 75009
Ader
Info and sales conditions
Catalogue
Salerooms
Results
News feed
See all news
The city of Paris announces financial boost for the culture sector
The UK’s largest arts and cultural organization might not open until April 2021
Hong Kong gallery association creates art fair to help reinvigorate art market
Artist Emma Amos has died at age 83
Not to be missed
Pre-sale
Vincent Lécuyer Collection
The Paris gallery owner, who died in July 2019, left a group of…
Pre-sale
A peerless pair
Although these commodes were produced at different times, they make…
Pre-sale
Iconic cars
Rarities including a collection of Packards and a Lamborghini "supercar"…
Pre-sale
Lagerfeld by himself
Karl Lagerfeld died on February 19, 2019, leaving behind a legacy as an…