The Emergence of Japonism with Lalique

This exquisite turn-of-the-century pendant with its long chain illustrates René Lalique's inventiveness and his use of faraway influences for inspiration. 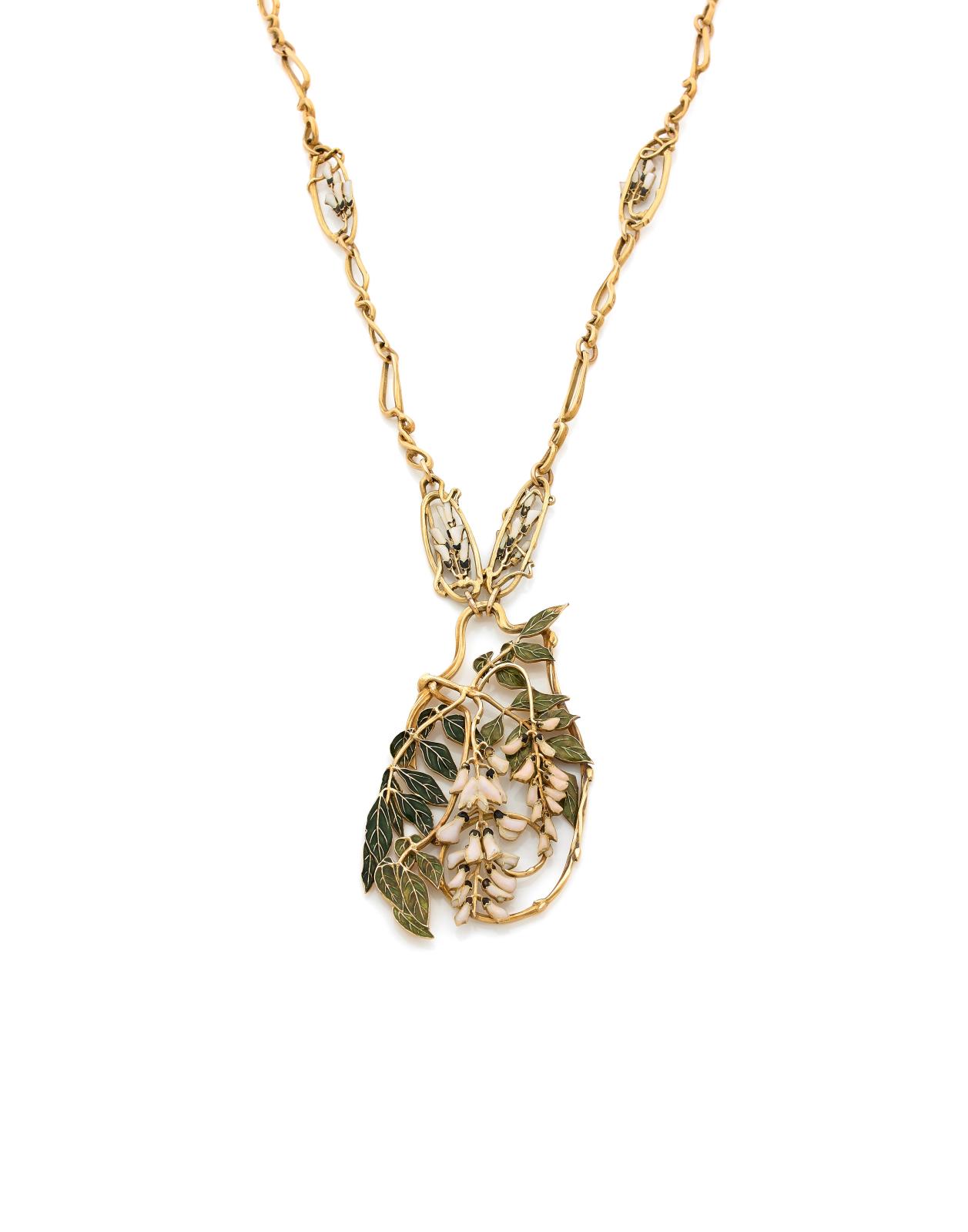 His refined craftsmanship charmed a star, Gina Lollobrigida, although it is not certain this pendant and chain belonged to her. A unique piece created between 1899 and 1901, this jewel illustrates René Lalique's singular style, first and foremost through his materials. In the 1880s, Lalique began to stand apart from Boucheron by working with innovative substances like ivory horn, enamel, pearl, mother-of-pearl and semi-precious stones. He used materials to serve design and form, emphasizing craftsmanship rather than the value of the medium. He reproduced the fauna and flora of his childhood world, with irises, orchids, magnolias, cherry blossom, poppies, bats, dragonflies, wasps, swans, butterflies and the like. Here the subject is wisteria. If the message of this blossom in the language of flowers is to claim another's love, its white variety expresses reciprocal trust. Claude Monet and Edmond Rostand helped to popularise the plant in their gardens. Meanwhile, Lalique's fondness for the flower continued for several decades. In 1920, he created the "Wisteria" bottle, with a long, delicate blossom wandering all over it, and nearly a century later, in 2016, the same factory reinterpreted this design in vases and bowls. It is from the Japanese artistic vocabulary, revealed to the Western world on the occasion of the Universal Exhibition in Paris in 1867, that Art Nouveau borrows its floral motifs. This was a potent event for French artists. Their thirst for creation was slaked by the poetic refinement of the Japanese arts, with their huge variety of themes, pastel palette and focus on artisanal work. The desire for Japanese art and culture permeated the Parisian smart set. The Louvre received Japanese works in 1884 through Adolphe Thiers' legacy; Pierre Loti published Madame Chrysanthème in 1887; the Musée Guimet opened in 1889, and for the Universal Exhibition of 1900, the dealer Hayashi Tadamasa imported masterpieces from Japan, including several items from Emperor Meiji's collection. 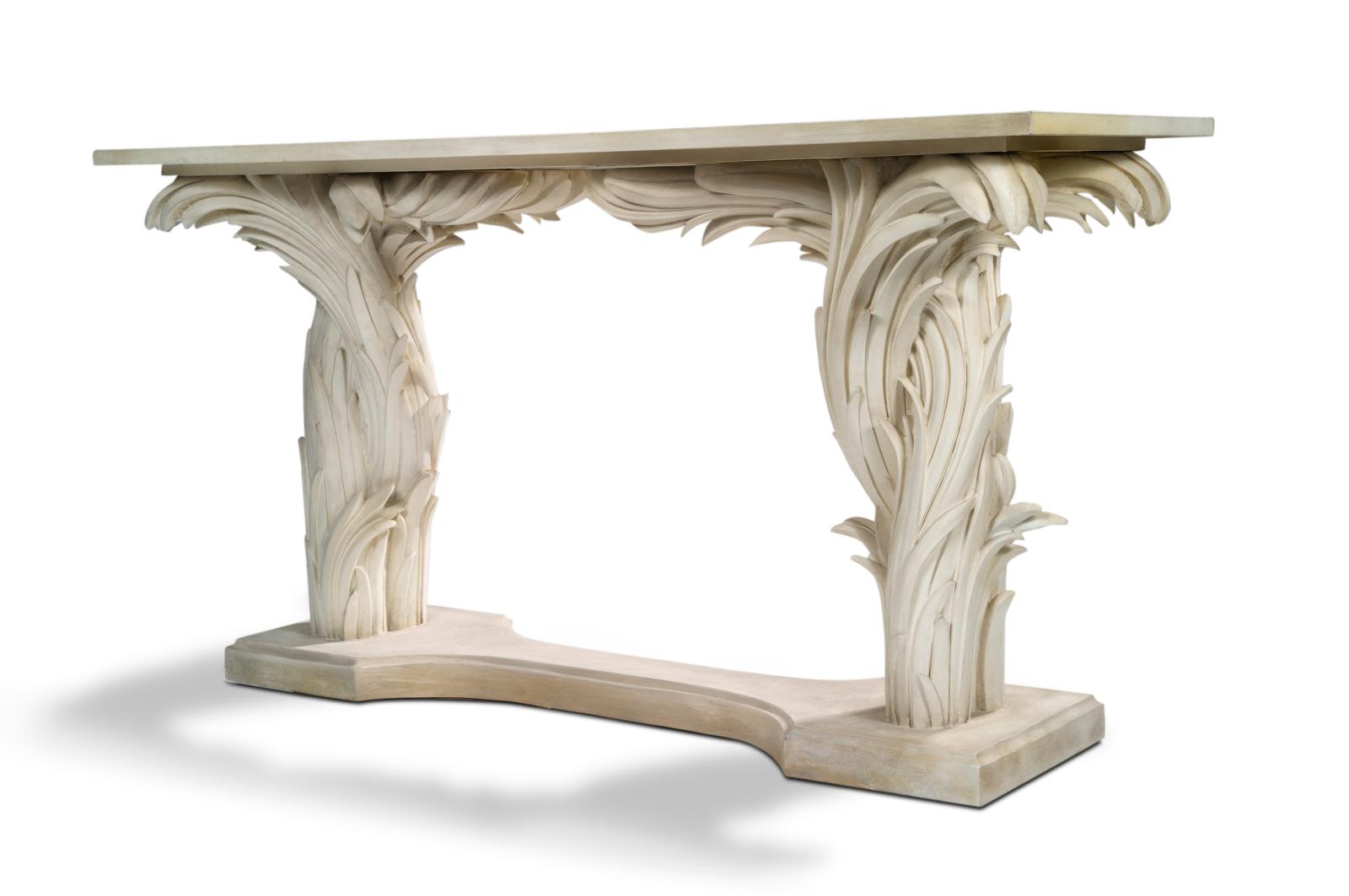 "You can furnish a room very luxuriously by removing the furniture," as Jean-Michel Frank would say. However, it's difficult to ignore this console, whose sober top and classical frame are emphasized by the exuberance of the leafy uprights. Do these reflect the designer's penchant for reinterpreting 18th-century furniture? Someone who often worked with original materials like gypsum, terra cotta, mica, graphite, galuchat, straw, sanded lacquer, hand-stitched leather and parchment, here he chose a less sophisticated substance: plaster. A friend of the Surrealists, Frank worked for a businessman for a while, but was far more interested in the intellectual and artistic world. In 1918, he began to work as an interior designer for Pierre Drieu La Rochelle and Louis Aragon, to whom he was close. With white walls and an almost total lack of furniture, his interiors were extremely simple, and instantly appealing. In 1926, the smoking room with parchment-covered walls and boudoir in straw marquetry he designed for the private mansion of the Noailles family brought him recognition among Parisian high society. With his colleague, the cabinetmaker Adolphe Chanaux, he developed furniture and lighting with minimalist forms, which enchanted the couturiers Elsa Schiaparelli and Marcel Rochas and the perfumer Jacques Guerlain, for whom he designed the beauty salon at 68 Avenue des Champs-Élysées, with Diego Giacometti and Christian Bérard.