The "Color-Shapes" of French Master of Abstraction Maurice Estève

A 1982 watercolor by Maurice Estève, a master of postwar French abstraction, will headline a selection of 20th-century art. 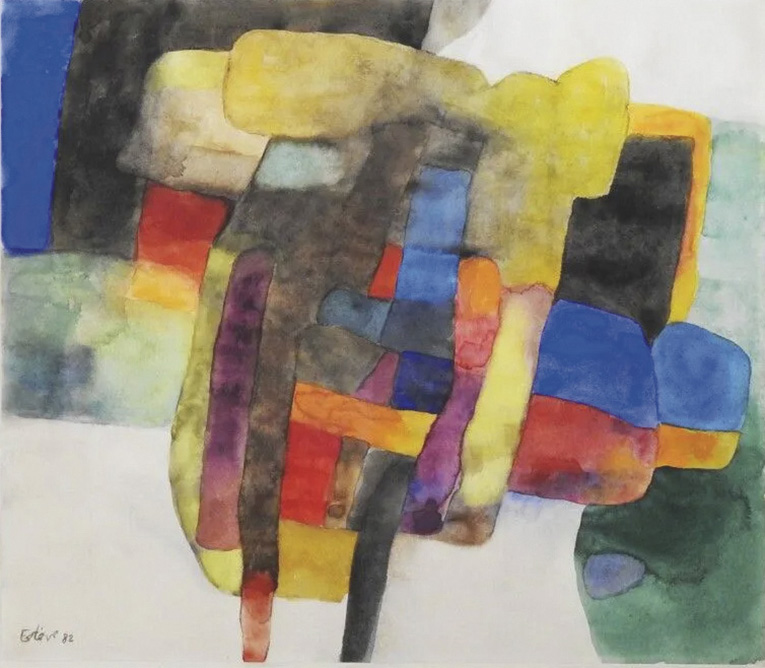 Watercolor was one of Maurice Estève’s favorite media. His ability to create colorful, diluted, vibrant shapes was wonderfully suited to an organic abstraction born of memories that he recreated based on a "visual order between the real and the imaginary," as French art historian Pierre Francastel wrote in his book about the artist (Galanis, 1956). An example from 1967, 982-A, fetched €35,000 in Paris on February 11 (Artus Enchères OVV).

Dated 1982, Composition A 1139 has been exhibited at the Birch Galleries in Germany and Bert in Paris; it is listed in the artist’s archives under number 11139. Over the years, Estève developed his own brand of sensitive, nuanced abstraction. He began in 1929 with a purely geometric Embarquement pour Cythère (The Embarkation for Cythera). His 1930s works were still figurative but more and more stylized, culminating in the mid-1940s in a network of structural shapes and lines combined with increasingly bold colors. The sale also features Volcano, a 2011 painting by Paris-based American street artist JonOne (€12,000/15,000), and "Your Turn to Play", a mirror in a lacquered wood frame by the famous architect Andrée Putman, which was exhibited by the Galerie Kreo in Paris (€10,000/12,000).

DECORATIVE ARTS OF THE 20th CENTURY
Orléans - Galerie des ventes, 2, impasse Notre-Dame-du-Chemin - 45000
Pousse-Cornet
Info and sales conditions
Catalogue
Newsfeed
See all news
Whitney Gifts Warhol Research Archive to MoMA
England’s Culture Sector to Receive £850 Million Extra Funding
Success for Paris Internationale Latest Edition
Cécile Debray Takes Over from Laurent Le Bon at Paris’ Musée Picasso
Not to be missed
Pre-sale
Writing Bodies by Sanyu, the "Chinese Matisse"
Eight drawings by Sanyu have been rediscovered. Once in Michel and…
Pre-sale
A Poem-Painting by Max Ernst
German Surrealist and Dadaist painter Max Ernst widened the scope…
Pre-sale
Rudimentum Novitiorum, a Rare Treasure Trove of Hist…
The Rudimentum Novitorum , one of the first universal chronicles,…
Pre-sale
Faster, Higher, Farther: The History of the Olympic Games…
As it did a year ago, the French sports daily L'Équipe is presenting…