Gabriel Viardot's inspiration for his most original furniture was ancient China and imperial Japan, as witness this display cabinet. 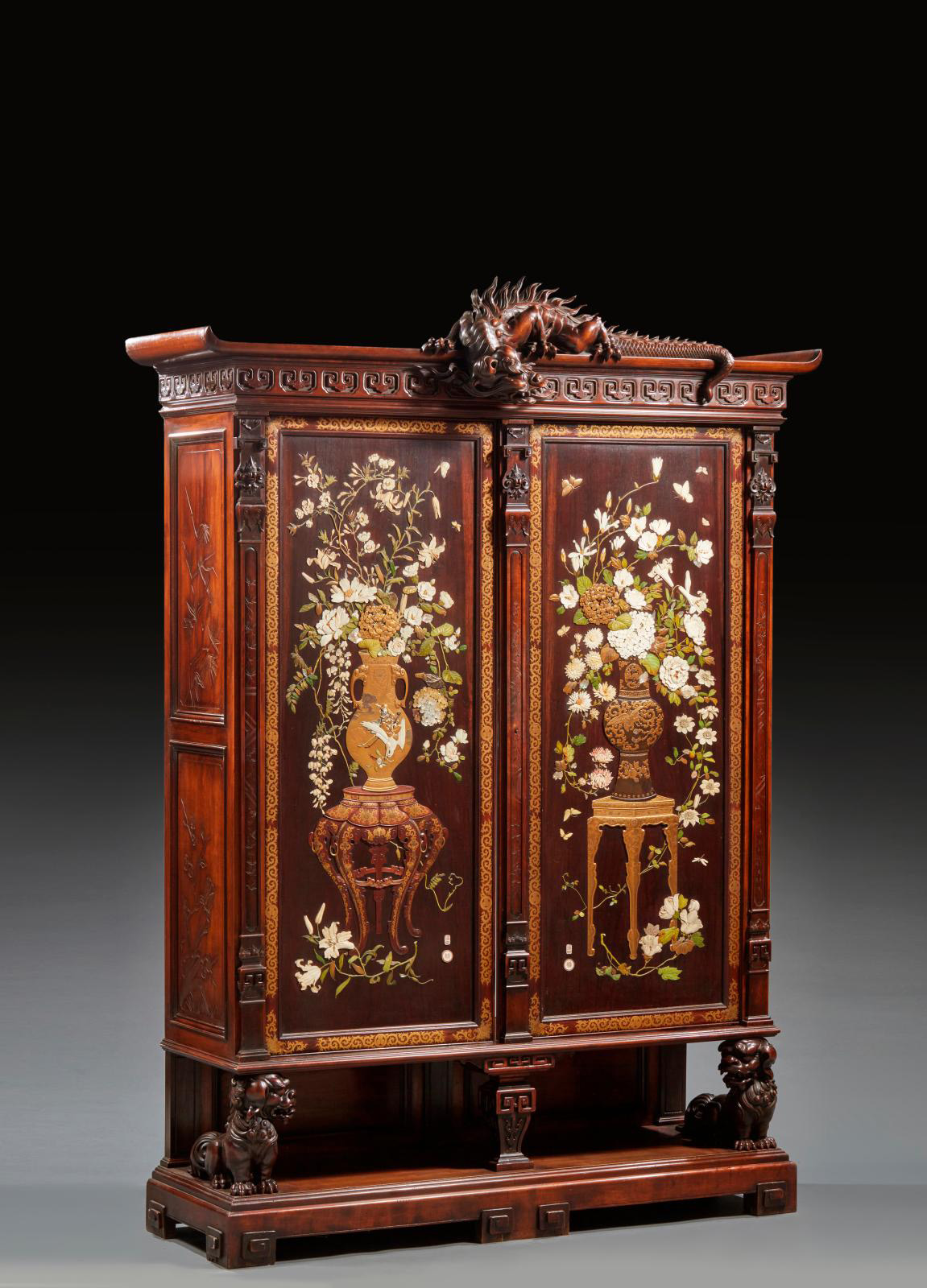 A rampant dragon poised to attack and two protective Foo dogs provide proof, stronger than any other carved motif, of China's influence in the decoration of this stained wood presentation cabinet. But that's not all. Gabriel Viardot (1830-1906), its creator, did not limit himself to this Chinese style, widely in vogue in Europe for several centuries, but looked even farther East—to Japan, to be precise. After its forced opening, the archipelago poured shiploads of creations into the West, which, ever avid for novelty, developed a passion for them. The Universal Exhibitions of the second half of the 19th century played their part as well. A term was even invented and took root: Japonism. Many were the collectors, writers, dandies, critics and artists who adopted it with delight. One of them was Gabriel Viardot, who founded his own workshop in 1860 after working with his brother, Louis-Gustave. In 1867, as he strolled through the Champ-de-Mars, the site of the second Paris exhibition, he decided to launch into "Chinese-Japanese style furniture", i.e. free interpretations of Asian furniture to suit the tastes of his clientele.

This display cabinet is a perfect illustration of this love of Asian art. It is dated 1885, the year of the Antwerp Exhibition, where Viardot garnered a gold medal. However, few of his works indicated dates—a rare commodity that only honored truly remarkable pieces, so it is just a small step to imagine that this one was exhibited at the Belgian event. The Paris cabinetmaker also called upon the lacquerer Masatoshi Hamada to decorate the doors (his stamp appears on them), whereas he usually imported lacquered panels directly from China or Japan to adorn his European-style frames. The doors here feature a relief decoration of bouquets of natural-looking blooms in vases placed on stands.

Success crowned every appearance, and in 1887, the Revue des Arts Décoratifs praised his work as follows: "Mr. G. Viardot, having swept up every possible award, continues to elicit acclaim. The pieces he exhibits are of a finish and craftsmanship that readily account for their widespread success." And now he is coming to seek a triumph at auction. And surely the carved dragon he summoned—a mythical being of good omen in Asia—will bring him yet another victory.