Vermiglio: a mystical and stylistic marriage

This “sacred conversation” from a major private collection reconciles the Roman and Bolognese schools under the kind eyes of three saints. 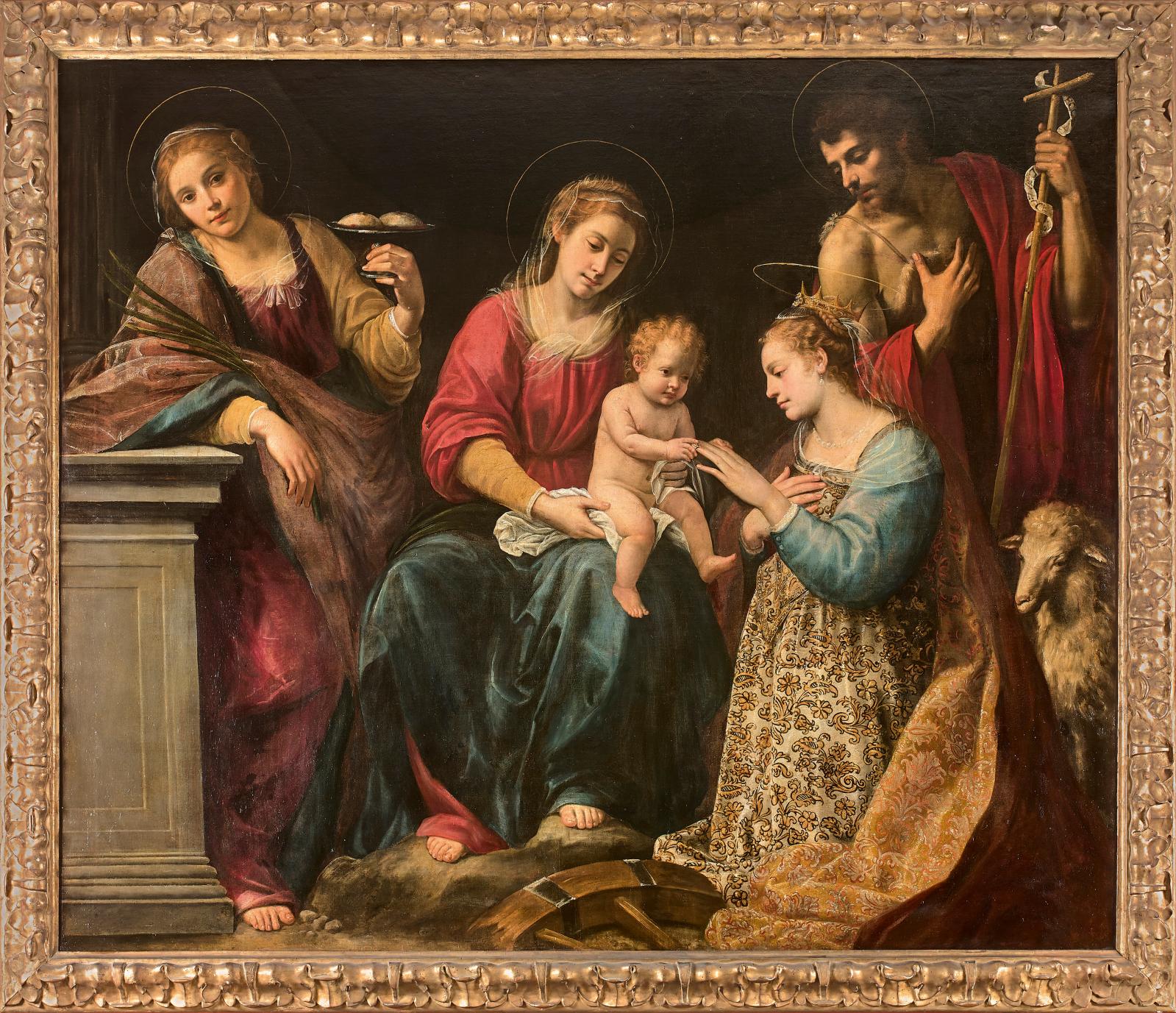 Mary, the central feature of a symmetrical composition, sits enthroned on a mound, holding Jesus in her lap. At her feet is Saint Catherine, whose rich brocade garment, indicating noble origins, contrasts with a sinister fragment of a wheel, her attribute and the instrument of her torture. As a reward for her grisly ordeal, the Child slips a ring on her finger, consecrating his Mystical Marriage with the young Christian girl martyred in Alexandria around 312, according to The Golden Legend. Summoned as privileged witnesses, two other saints stand beside them: on the right, the ascetic John the Baptist accompanied by the Paschal Lamb; on the left, a strangely more casual and secular-looking Agatha of Sicily leaning on a balustrade, brandishing a palm leaf, her tortured breasts on a dish. The iconography is in keeping with the traditional theme of "sacred conversations" dear to Italian artists; but the painting also complies with the directives of the Counter-Reformation by delivering a message that is very easy to decipher. Peaceful chiaroscuro blends with a classicising balance. University of Pavia Professor Francesco Frangi confirmed the unsigned work’s attribution to Giuseppe Vermiglio. Born in Alessandria, Piedmont, in 1604 the young artist, in search of training, went to Rome, where Caravaggio’s pictorial revolution strongly influenced him. Several of his religious paintings attest to this, including The Incredulity of Saint Thomas altarpiece painted in 1612 for the Roman church of San Tommasso dei Cenci. In 1619, Vermiglio returned to northern Italy, namely Milan, where his style eventually softened under the dual influence of Bologna’s Annibale Carracci and Guido Reni. That led to this Mystical Marriage, a perfect expression of Vermiglio's style in the 1620s-1630s, which climaxed in his most famous work, The Nativity, at Milan’s Brera Gallery. A precious testimony to this pivotal artistic moment, our large canvas boasts a prestigious provenance. In the 19th century, it was one of the cornerstones of a major private collection for which its owner built an incredible museum-like gallery in his Savoy castle, in the Alps. The painting’s latest home has been a Paris Left Bank mansion. Now it is ready for a new life.

Fine 18th century furniture has become a somewhat rare commodity under the hammer. This chest of drawers by Charles Cressent is a splendid example. 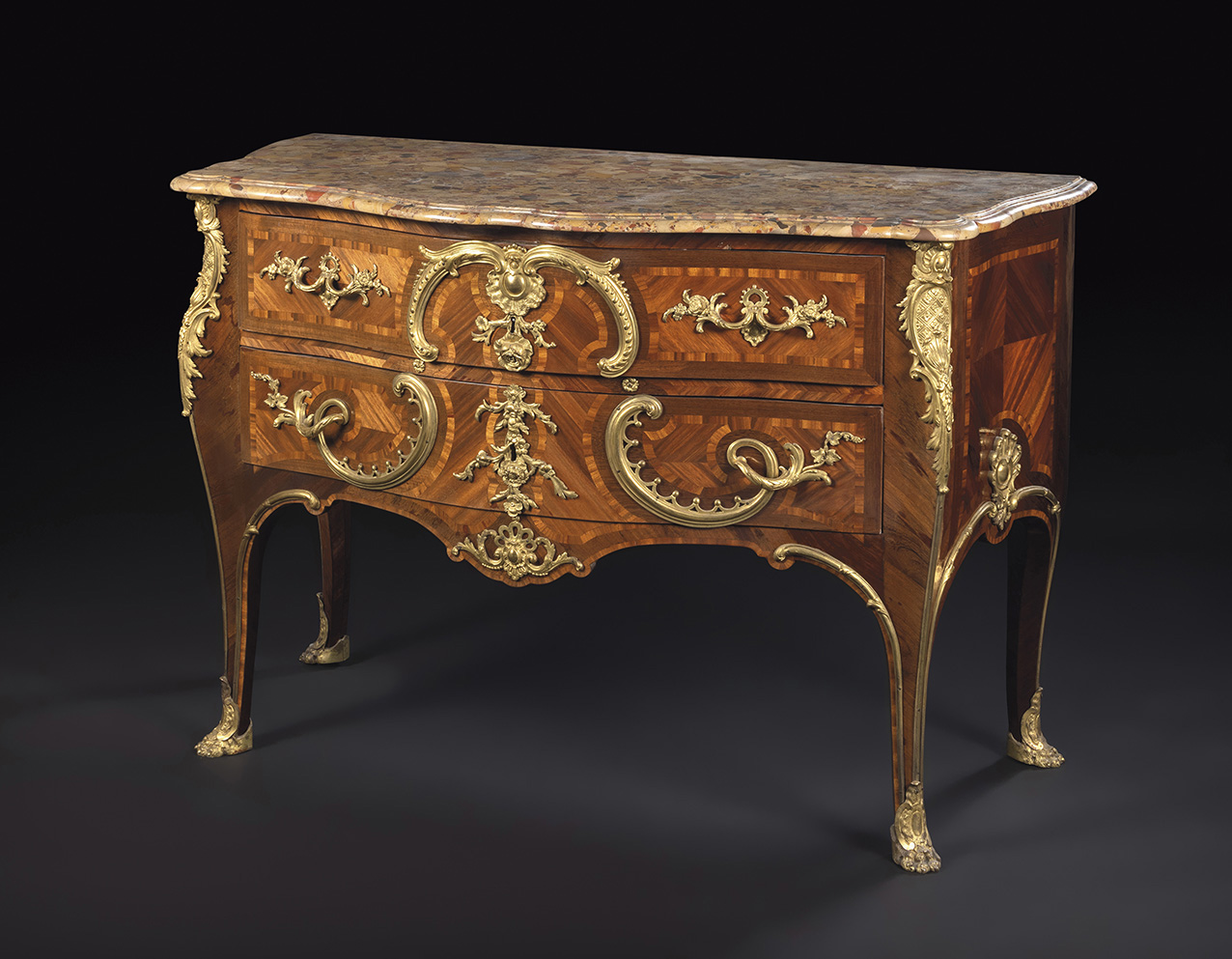 There's no point in looking for the cabinetmaker's stamp: Charles Cressent didn't use one. More precisely, he didn't need to, because his works—mainly chests of drawers, flat desks, corner pieces, cabinets and pendulum clocks—were codified and recognizable. He created all sorts of chests of drawers, which he himself described as "à la Régence", "à la Dauphine", "à la Chartres" and so on. This piece from the 1730s is typical of his work. It is made of veneered wood decorated with double scrolls with flower swags in bronze, and barely a dozen examples are listed in Alexandre Pradère's monograph. The prototype, also the oldest piece, seems to be the one in the former Machault d'Arnouville collection at the Château de Thoiry. Both a cabinetmaker and bronze-maker (which caused him problems with the bronze-makers' guild), Cressent favored friezed veneering with a herringbone pattern and latticework set off with bronze mounts: a decorative element he considered essential. Rather than marquetry featuring flowers, ruins and gardening attributes, he preferred shimmering backgrounds (his favorite woods were bloodwood, also known as cardinal wood, and kingwood), which he used to display and bring out the refined chasing and richness of the gilt bronze elements. The chest of drawers here reflects the Louis XIV rather than the Louis XV style. The presence of the crowned "C" indicates that it was sold between 1745 and 1749, and probably passed through the hands of a Marchand-Mercier or was deposited in a restoration workshop. Though it guarantees not quality so much as the payment of a tax on the bronze- and the copper-work decorating "all old and new works", this type of hallmark is very common; proof of how popular these items were in the mid-18th century. Although he had to sell his furniture several times because he was short of money, Charles Cressent worked for the Dukes of Orléans, the Regent and his son Louis, and is often considered the greatest cabinetmaker of the French Regency.