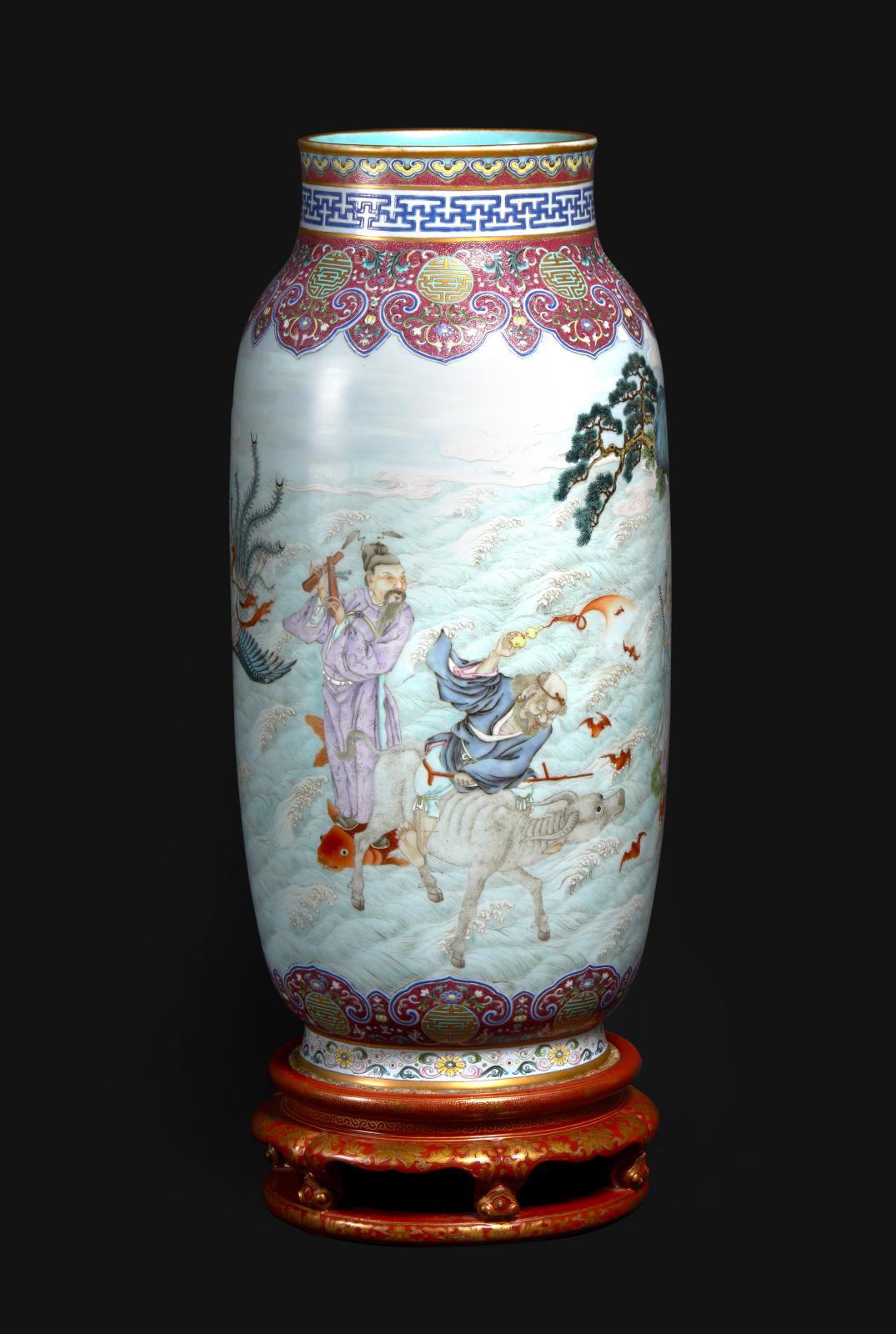 The large porcelain vase called deng long zun is shaped like a lantern. Like a scroll painting being unrolled, its lavish turning décor is discovered step by step, successively showing the Eight Immortal Taoists. The busy scene illustrates their legend’s most famous episode: Ba xian zhu shou, "The Banquet of the Immortals", and, more specifically, their return from visiting Xiwangmu, the Queen Mother of the West. The benevolent creatures must cross the East Sea, which ensures everlasting happiness, using their respective vehicles, either animals or flowers, to make this extraordinary voyage. The recurring theme of the Eight Immortals is one of the most popular symbols of longevity. The whole vase, says expert Alice Jossaume, "abounds with them: shou characters in the medallions, peaches and lingzhi mushrooms, the stag and the pine tree, all summoned to wish their host – the Emperor – a long and happy life." The emperor in question is Qianlong (1736-1795), whose mark is on the base, indicating that the precious vase was intended for the exclusive use of the palace.
With its exceptional size (55 cm, 21.6 in, including the extremely rare original porcelain base) and the quality of its pink, polychrome and gold fencai enamels, the vase marks the creative climax of Qianlong’s reign. He was not only an emperor, but an artist and aesthete as well. A Western influence, perceptible in the use of incised sgraffito decoration in the friezes, can be detected in this and some of his other commissions; the technique was inspired by the Jesuits at Qianlong’s court. The vase of the Immortals is imperial on two counts: under its base, a yellow label with the inscription "tribute from Chongli, number 15" probably means it was a birthday present from the minister Chongli (1840-1907) to Dowager Empress Cixi. A few years later, Captain Antoine Laporte, stationed in Beijing in the early 20th century, must have acquired the vase and brought it back to France, where his family kept it until now.

Asian Arts
Salle 9 - Hôtel Drouot - 9, rue Drouot - 75009
Auction Art Rémy Le Fur & Associés
Info and sales conditions
Catalogue
Salerooms
Newsfeed
See all news
We will be on vacation from July 23rd - August 23rd. Wishing you a great summer and see you in September!
Santiago Caltrava Renovates San Gennaro Church in Naples
50% Funding Cuts for Arts and Design Courses Approved by UK Government
Instagram’s New “Sensitive Content” Controls Cause Concern Amongst Artists
Not to be missed
Pre-sale
Under the Protection of Maahes: A Rare Egyptian Bron…
This well-sized bronze statuette dating from Egypt’s Late Period…
Pre-sale
The Op Art of Vasarely and the Discourse of Descarte…
This painting by the master of optical art has never come up for…
Pre-sale
Lalanne and the Charging Rhinoceros
This bronze sculpture with an enamel patina, which is from a private…
Pre-sale
From the Abstraction of Viallat to the Silk Paintings…
Two worlds will come together in Nîmes: those of Vietnamese painter…