This meticulously chosen group celebrating the many civilisations that flourished in the territories of Mesoamerica will soon be on show in Paris, when we can savour the authenticity of pieces preserved in the same condition they were found in. 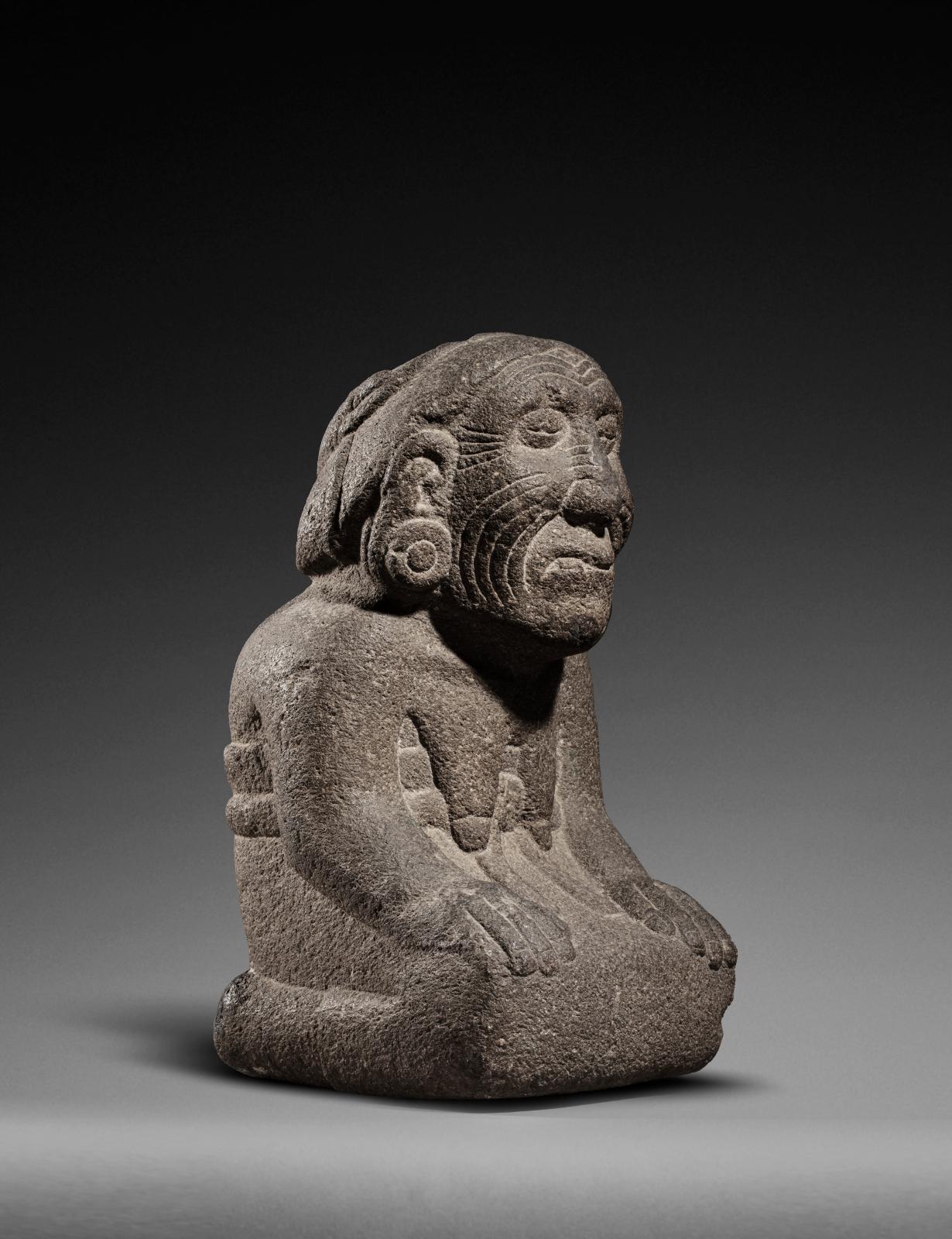 For Manichak and Jean Aurance, what triggered their collection of pre-Columbian objects was their visit to the exhibition "Chefs-d'œuvre d'art mexicain" (Masterpieces of Mexican art) at the Petit Palais in Paris in 1962. These former students of the Arts Décoratifs and Beaux-Arts schools in Paris instantly fell in love with a formal world hitherto unknown to them. A few months later, this led to their first purchase at Olivier Le Corneur's gallery. As they gradually built up a collection, this was structured by key pieces gleaned from prominent aesthete dealers in the Parisian milieu of pre-Columbian art lovers of the 1960s and 1970s. Jean Roudillon, one of their special contacts, remembers this "incredible period when we discovered the pre-Hispanic civilisations through an influx of original objects. Given their amazing quality, there was no call to restore them; they were magnificent in their incomplete state." The expert considers that it is precisely the trademark of the Aurance collection – this famous "lack of any restoration that can destroy an object", to quote Manichak – which should ensure the success of the sale. For instance, we find a superb incomplete religious mask (ca. 450-650) from Teotihuacan reproducing the face of a great lord, similar to the mask in André Breton's collection dating from the same period (now in the Musée du quai Branly in Paris). Anyone who fancies this fine example of lapidary art from the "City of the Gods" will need €6,000/8,000.

Mother goddesses from Aztec mythology
Looking at the catalogue, we can see that the Aurances were mainly drawn to Mesoamerican cultures, particularly the fascinating world of the Aztecs. "Here it is illustrated by a group of extraordinary sculptures, including these two statues of female deities, which are the real masterpieces in the collection," says sale expert Serge Reynès. The first of these, a statue in volcanic stone dating from the imperial period (1350-1521), represents Coatlicue, goddess of the earth and fertility – one of the pillars of the Aztec religion, as she was the mother of the gods who gave birth to the moon, the stars and the fearsome Huitzilopochtli, god of the sun and war. She was a highly protective figure also known to her worshippers as "Toci", "our grand-mother". This is the form she takes in the Aurance collection. As she may be the only extant representation of this type, she has a high estimate: €50,000/80,000. The second primordial goddess in the pantheon, Chalchiuhtlicue, ruled over the world of water. Here she is shown seated, wearing a huipil: a garment with three rectangular panels embellished with several pendants. Her face, turned to the sky beneath a skilfully made architectural headdress, is imbued with an ecstatic expression that should garner her €40,000/60,000. In addition, these two statues – probably intended for devotional purposes – were highly acclaimed at landmark exhibitions including the one at Geneva's Rath Museum: "Mexico: land of the gods – Treasures of pre-Columbian art" (November 1998 to January 1999).
But the term "Aztec religion" also conjures up the idea of "sacrificial offerings"… And these are evoked by an impressive quadrangular ceremonial altar carved in the round with death's heads and interlaced tibias. Once belonging to the famous collection of French historian Eugène Pépin, this monolith, contemporary with the two previous pieces, comes from the capital, Tenochtitlan: present day Mexico City (estimate: €30,000/40,000).

Kings, priests and warriors: the world of the Mayas
Far from there, between Yucatan and current Guatemala, lay the land of the Mayas. Divided into several city states, this area developed an extremely refined art, as witness a bas-relief embellished with a priest-lord holding an incense burner, floating in the age-old waters of the infraworld, or underworld. "A piece with a particularly interesting pedigree as it was bought in 1969 from the colourful explorer and dealer Robert Vergnes," says Serge Reynès. So this looks set to fetch €20,000/30,000.
The Mayans' great speciality was their terracotta works, including artefacts produced on Jaina Island in Campeche State. These are illustrated by the figure of another priest-lord (c. 550-900), seated in a hieratic position, palms turned symbolically towards the front. A highly revealing detail: the two cheek-guards he wears, designed to protect him from injuries during the ritual ball game. This admirable piece will cost you €6,000/8,000. Lastly, the many polychrome ceramic recipients include an outstanding cylinder vase painted on the outer surfaces with two cartouches personifying Chaac, the god of rain. Two volutes emerge from his mouth, symbolising water flowing from a spring or fountain. The effigy echoes the mask of the deity worn by priests during sacred ceremonies. You will need €4,000/6,000 for this representation of one of the key figures in the Mayan pantheon.

Have you always preferred the art of Mesoamerica?
Our purchases were guided somewhat by chance, starting with objects proposed to us by specialists and dealers who became our friends, particularly Olivier Le Corneur and Jean Roudillon. But it's true that we developed a genuine fascination for Aztec art, with its raw, impressive sculptures.

You have left all the pieces in your collection in the sometimes-incomplete condition they were found in. Why?
If you remove the marks of time, you destroy the soul of a ceramic piece or sculpture… The black mask from Teotihuacan is a speaking example: all the magic of this art is contained in this large half-face with its highly accentuated profile. There's no need to make it complete. You feel the same emotion with the other mask, of a similar origin, but in alabaster, where one eye is covered with a limestone concretion that has become an intrinsic part of its history.

Which of all these relics of lost civilisations are your favourites?
First place for me would go to the Aztec statue of Coatlicue, goddess of the earth and fertility, in her form as an old woman. Her face is imbued with great mystery and touches me deeply, particularly the expression of her lips, where I can sense a smiling forming… There is also a marvellous tripod metate from Costa Rica carved in volcanic stone, which has an incredibly modern form with its curved plate.

The Wagner estate’s gold pre-Colombian artworks can be counted on the fingers of one hand, or almost, but the estimates have five figures. 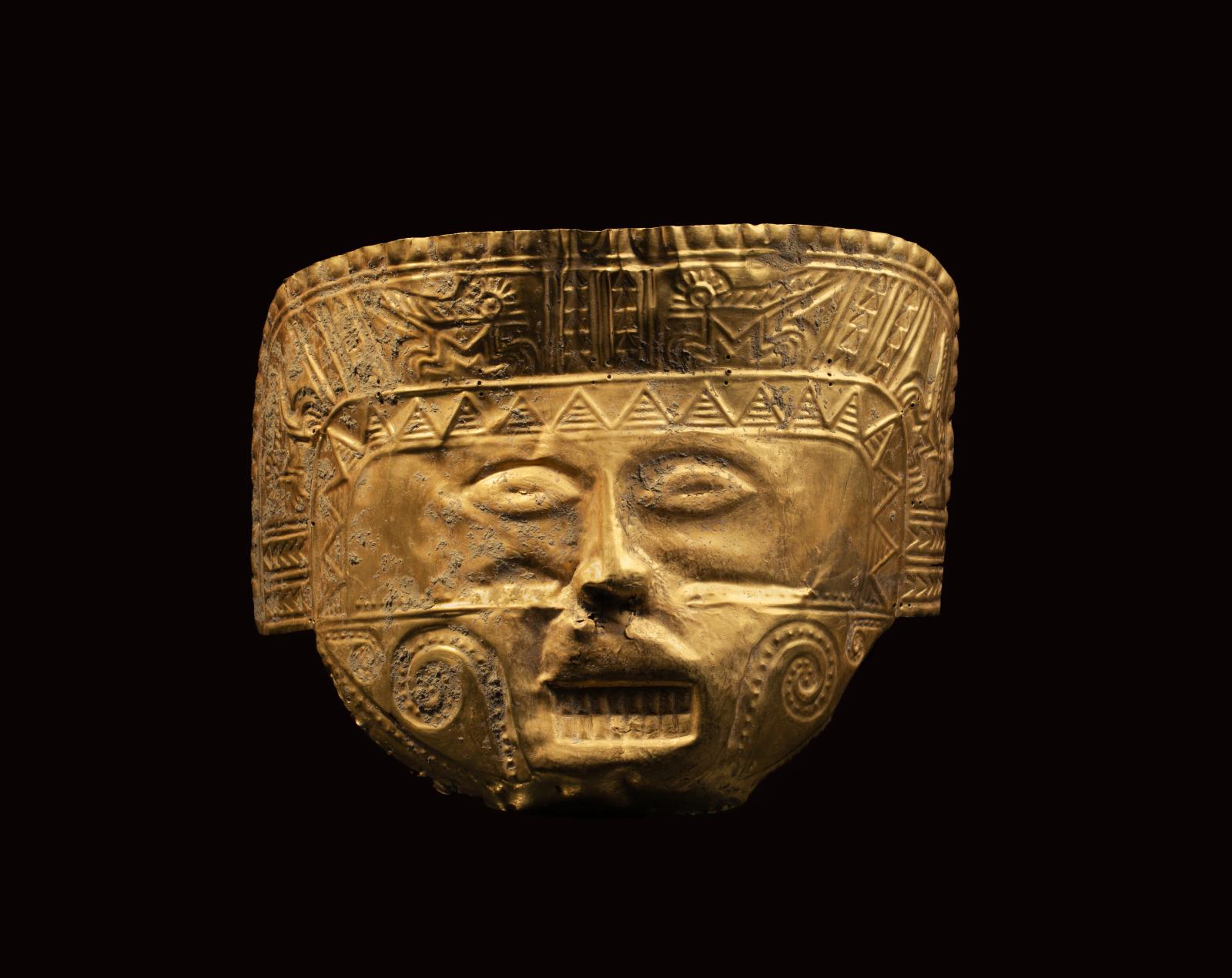 Part of the collection owned by the art dealer Benditch Rudolf Wagner (1928-2012), born in Switzerland’s Bern canton, sold for €1.3 M at Drouot on 3 December 2012 (Castor-Hara auction house). Today other works are being sold by his descendants. Wagner discovered Peru in April 1952 while working for a multinational; this was a turning point and sparked his passion for objects of this ancient culture. He voraciously read everything he could find about the subject but did not acquire his first pieces until several years later in New York, where he was then living. After moving back to Switzerland in 1972, he opened Geneva’s first pre-Columbian art gallery on the heights of the old city. This time the focus is placed on Colombia. A shaman’s ceremonial mask decorated with mythical birds (100 BCE-200 CE) is expected to trigger the fiercest bidding war (€80,000-120,000). Another gold ceremonial mask, this one featuring sea symbols with surprised-looking eyes and mouth (Tierra Dentro region, Colima culture), is estimated at €60,000/90,000, while a royal crown in hammered, repoussé cut-out gold-bearing attributes of the bird god (Yotoco culture, 100 BCE-200 CE) should sell for €50,000 to 80,000. Two claw-shaped armbands worn during magical-religious ceremonies (Malagana period), one featuring the emblem of the jaguar-men clan (€70,000/90,000), the other the rain god (€40,000/70,000), reflect the famous mythical land of El Dorado – South America – supposedly dripping with gold. This group follows the dispersal of the Aurance collection, with which it shares the catalogue.

ART PRECOLOMBIEN dont Collection AURANCE & Succession WAGNER
Salle 4 - Hôtel Drouot - 9, rue Drouot - 75009
Millon
Info and sales conditions
Catalogue
Newsfeed
See all news
We will be on vacation from July 23rd - August 23rd. Wishing you a great summer and see you in September!
Santiago Caltrava Renovates San Gennaro Church in Naples
50% Funding Cuts for Arts and Design Courses Approved by UK Government
Instagram’s New “Sensitive Content” Controls Cause Concern Amongst Artists
Not to be missed
Pre-sale
Under the Protection of Maahes: A Rare Egyptian Bron…
This well-sized bronze statuette dating from Egypt’s Late Period…
Pre-sale
The Op Art of Vasarely and the Discourse of Descarte…
This painting by the master of optical art has never come up for…
Pre-sale
Lalanne and the Charging Rhinoceros
This bronze sculpture with an enamel patina, which is from a private…
Pre-sale
From the Abstraction of Viallat to the Silk Paintings…
Two worlds will come together in Nîmes: those of Vietnamese painter…