When Léger went back to his roots

The painter of the modern world was inspired by nature in this 1939 work, which attests to a particular period when he returned to the great pictorial tradition. 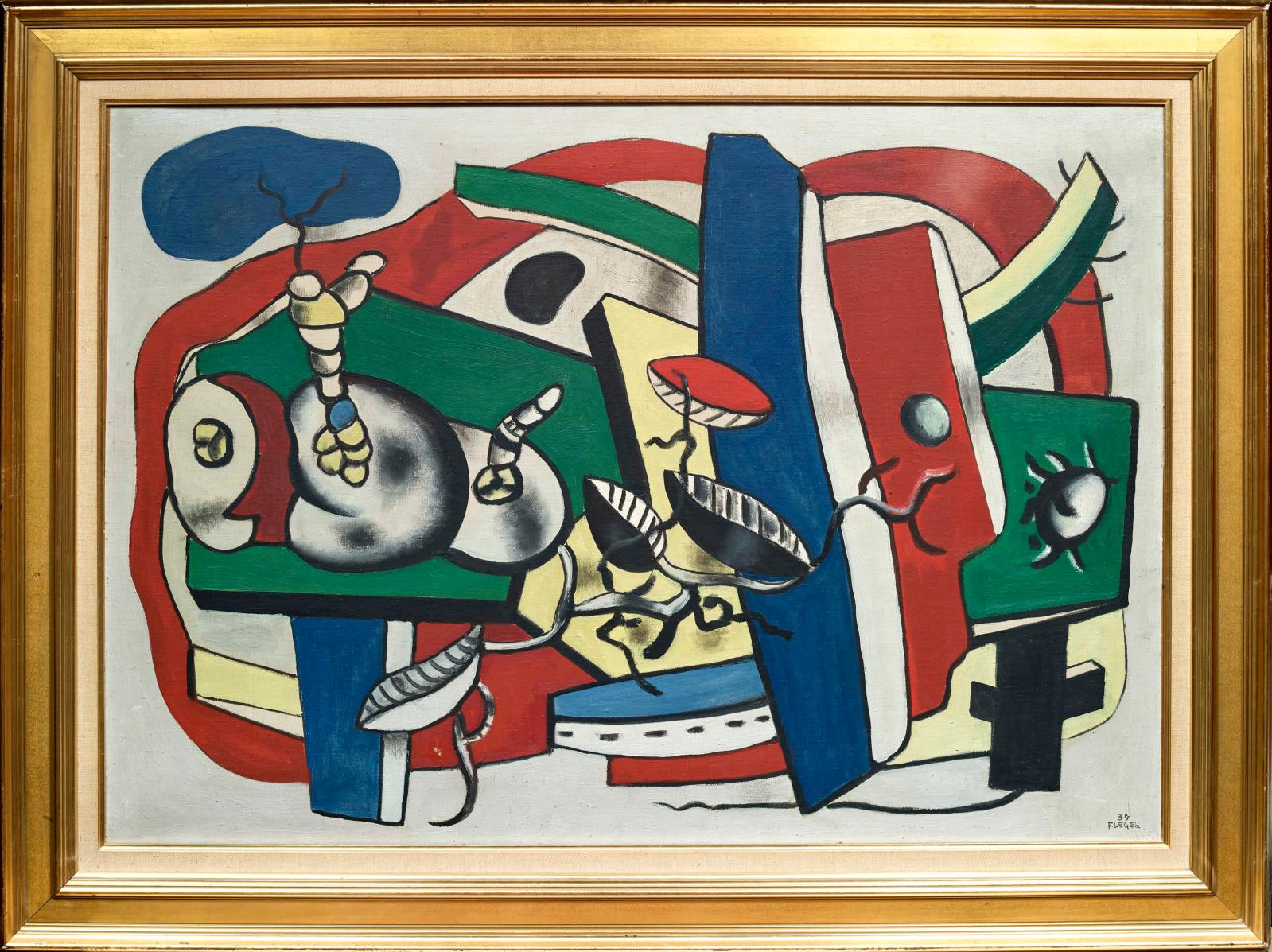 Fernand Léger’s Nature morte (Still Life) features three odd-looking fruits with stems and complex outgrowths lying on a green table. In the late 1930s, he often powerfully combined primary colours and vegetal elements with objects from everyday life. These were recurring motifs in his work, which composed a decorative grammar that included fruits, often cut in half, showing their delicate insides, seeds and pits, and walnuts, whose gnarled forms fascinated him especially. Foliage also overruns the painting. Tree trunks and torn roots appear, fairly symbolically, especially after 1940. From the animal kingdom, throughout 1938 Léger took the spindly figure of the spider, for, he said, "beauty is everywhere, in the object, the fragment, in purely invented forms." Here one appears on the right. Léger enjoyed collecting humble scraps of nature during his stays in his native Normandy, where he owned a thatched cottage at Lisores, in the Pays d'Auge hedgerow country. Walking through the woods, he would gather dead leaves, branches, flint, sheep bones and fallen apples, and soon integrated them into his paintings. Other times they were enlarged as though under a microscope and became a work’s only subject. Far from the mechanical aesthetics Léger explored in the 1920s, this painting perfectly illustrates the return to the figure and the human characterising the artist’s work before his exile in the United States. Listed as number 1056 in Georges Bauquier’s catalogue raisonné (Adrien Maeght éditeur, 1998), this vibrant still life boasts the additional advantage of coming from the collection of Frank Elgar, a famous Parisian writer and art critic whose real name was Roger Lesbats (1889-1978). An admirer of Cubism and the primary arts, he was a good friend of Léger’s, owning nine of his works. This one he acquired from the Galerie Louis Carré. It went on to have a brilliant international career, for it was shown at a 1951 exhibition at the Kunstforeningen in Copenhagen and the 1972 Léger retrospective at the Cultural Centre in Fukuoka, Japan.

COLLECTION OF ART CRITIC FRANK ELGAR, FERNAND LEGER
Salle 9 - Drouot-Richelieu - 9, rue Drouot - 75009
Tessier & Sarrou et Associés
Info and sales conditions
Catalogue
News feed
See all news
Original Flash Gordon comic strip to be auctioned in LA
A masterpiece by Sanyu to be auctioned at Drouot
Donation rebuke for the Los Angeles County Museum of Art
Da Vinci exhibition breaks Louvre record with 1.1 million visitors
Not to be missed
Pre-sale
Watch out for these!
A Parisian collector assembled this set of thirteen timepieces over…
Pre-sale
Back to nature
Combining spontaneity and sophistication, this work by Léonard Foujita…
Pre-sale
A snuffbox from the Empress Josephine
Given to the Comte de Barral by the Empress, this snuffbox promises…
Pre-sale
Botanical precision
An orchid brooch in gold and enamel from Tiffany & Co, late 19 th…