This monumental work recalls the importance of stained glass in the art deco period and casts a light on one of its artists: Jacques Damon. 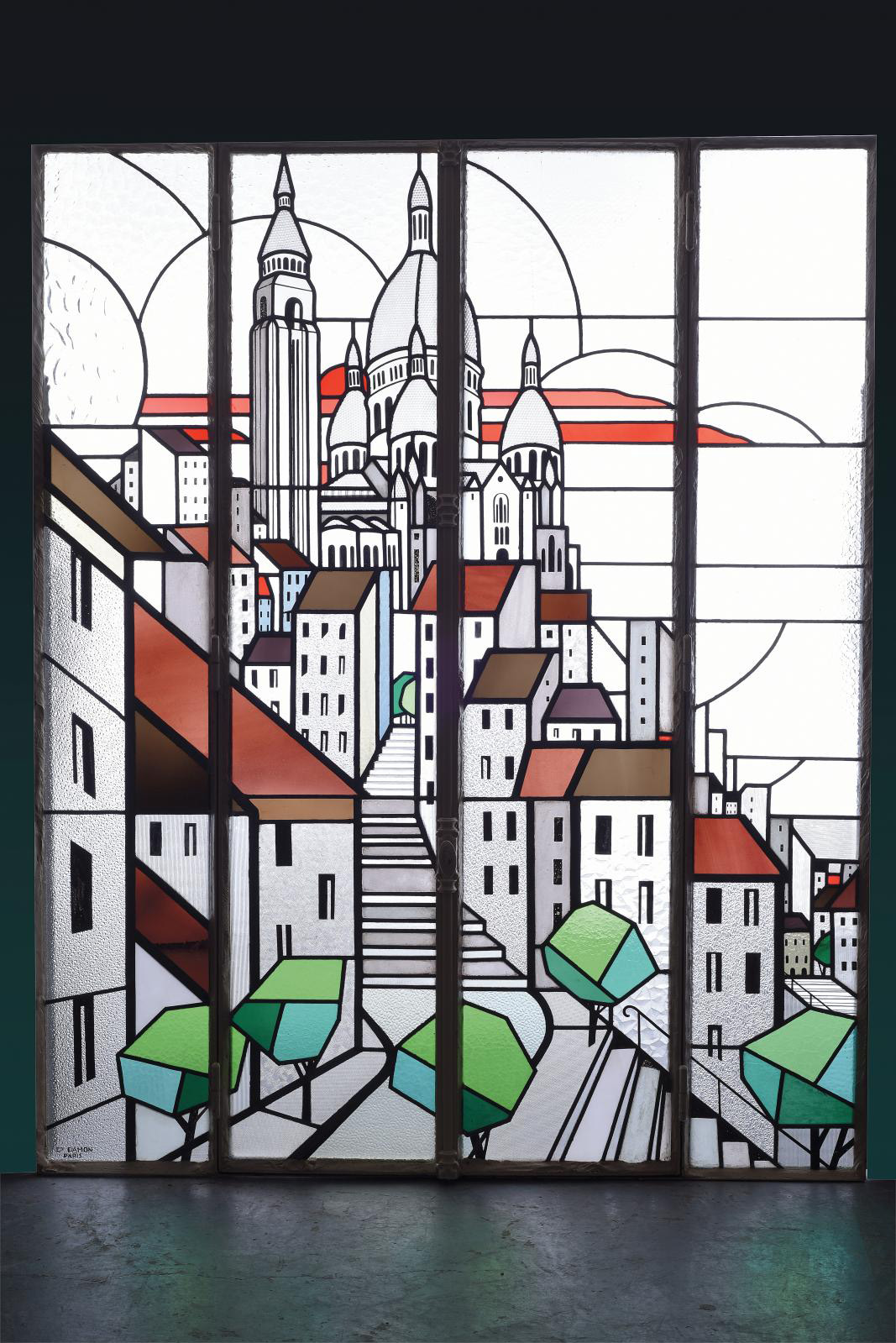 In the 19th century, the Romantic movement but also the "neo" styles, which revisit the medieval period and other periods stylistically and technically, breathed new life into the art of stained glass that was no longer limited to houses of worship but spread to wealthy individuals. With the concept of art nouveau and art deco as a total art, decorative objects appeared in everyday life. This fabulous six and half foot high view of Montmartre and Sacré-Cœur was originally made for a specific building.

the stylized forms, gray-white monochromes and elegant sobriety make this stained glass window a prime example of the style ushered in by the 1925 International Exhibition of Modern Decorative and Industrial Arts in Paris. Jacques Grüber and Louis Barillet were among the greatest names in the field at the time. This order was placed with Jacques Damon, who took over the studio of Jac Galland (1855-1922) at 13 rue Verniquet in Paris in 1923. Damon was particularly productive between the wars, creating some of the stained glass windows for the Molitor swimming pool in Paris. Meanwhile, in Picardy, Barillet was making many stained glass windows for churches, often based on Rene Bour’s cartoons. Both artists’ creations were always very graphic and left a mark on their era.

Decorative Art and Garden Art - Part II
Louviers - 28, rue Pierre-Mendès-France - 27400
Prunier
Info and sales conditions
Catalogue
Newsfeed
See all news
David Hockney’s Design for the London Subway Is Mocked Mercilessly Online
Mixed-Media Artist Robert Longo to be Represented by Pace Gallery after Metro Pictures Closure
Submissions Open at ETH Zurich for Scholarly and Experimental Articles
Latinx Art Expert E. Carmen Ramos is Appointed National Gallery of Art’s Chief Curator
Not to be missed
Pre-sale
Love Through the Eyes of Boucher and Watteau
The top results of this classic sale could be posted in the early…
Pre-sale
Cartier's "Mystery Clock"
This monumental Art Deco timepiece in rock crystal, onyx and marble,…
Pre-sale
The Style of French Architect Charles Percier
One of Charles Percier's earliest drawings, which he made in Rome…
Pre-sale
Into Outer Space with Kuramata
t his Solaris cabinet with an airy base again proves that lightness…