This huang zhong, or shiny bell, was made for an orchestra under the reign of Kangxi to celebrate military victories and ritual events. 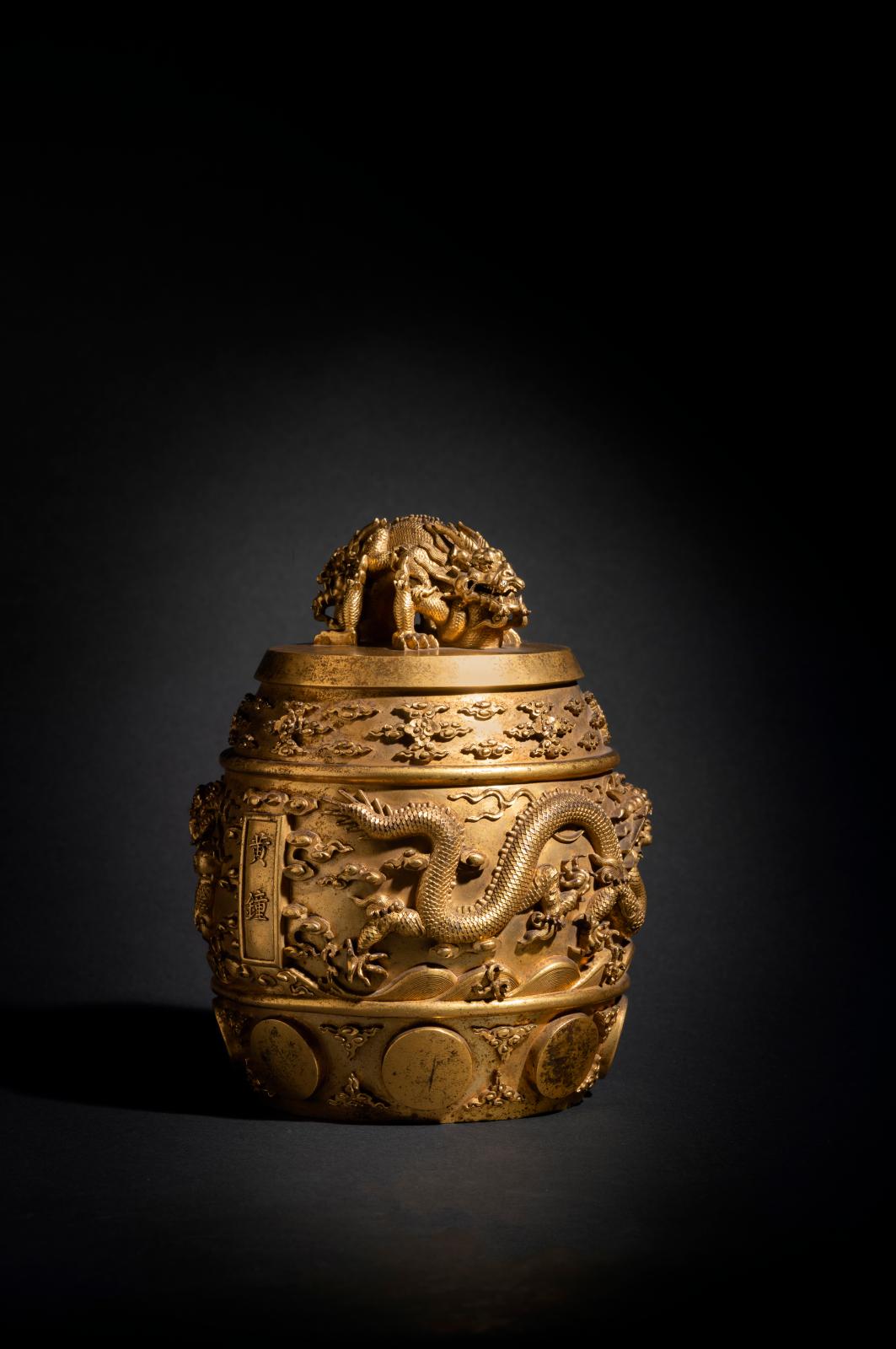 In 1759, a farmer in Jiangxi province found eleven bronze bells, which he gave to the governor of the province. He in turn gave them as a gift to Qianlong, who put them in a pavilion renamed Yungu Tang (“Rhyming-the-Old Hall”) located in Xiyuan Park close to the old Summer Palace. Known as the “Zhou bells”, they featured prominently in the treatise on Chinese musicology published by the emperor, a work started by his grandfather. An orchestra had to have a dozen bells, so Qianlong had a twelfth one cast and wrote poems to their glory. Like Kangxi, the emperor was carrying on a tradition that had emerged in the Warring States period in the fifth century before our era. As for the art of bell-making, it dated back to the Neolithic period (ca. 6,000-1,900 BCE). Music expresses joy: “joy” and “music” are written the same way in Chinese. The rites codifying harmony must connect man with his environment. Thus, bell orchestras came out to ring in the New Year and accompany the emperor during the Ploughing Festival, banquets and military victories. Their use had been regulated since the Zhou dynasty (eleventh to third century BCE): they were hung and struck with a mallet in two places depending on the desired sound. Instruments reserved for imperial use were decorated with dragons, symbolising Chinese civilisation’s continuity. The same iconographic repertory was used during the Ming dynasty on bells similar to the one offered in December. Several Ming and Qing examples occasionally turn up at auctions in Europe and the United States, and Chinese and American public collections possess more or less complete carillons.
The emperors would sometimes give temples or officials a bell to ring during rites and banquets. They bear witness to China’s long history, as illustrated by the dragon and the many similar examples found in tombs – a brilliant note that will delight collectors.

At the origins of carved lacquer 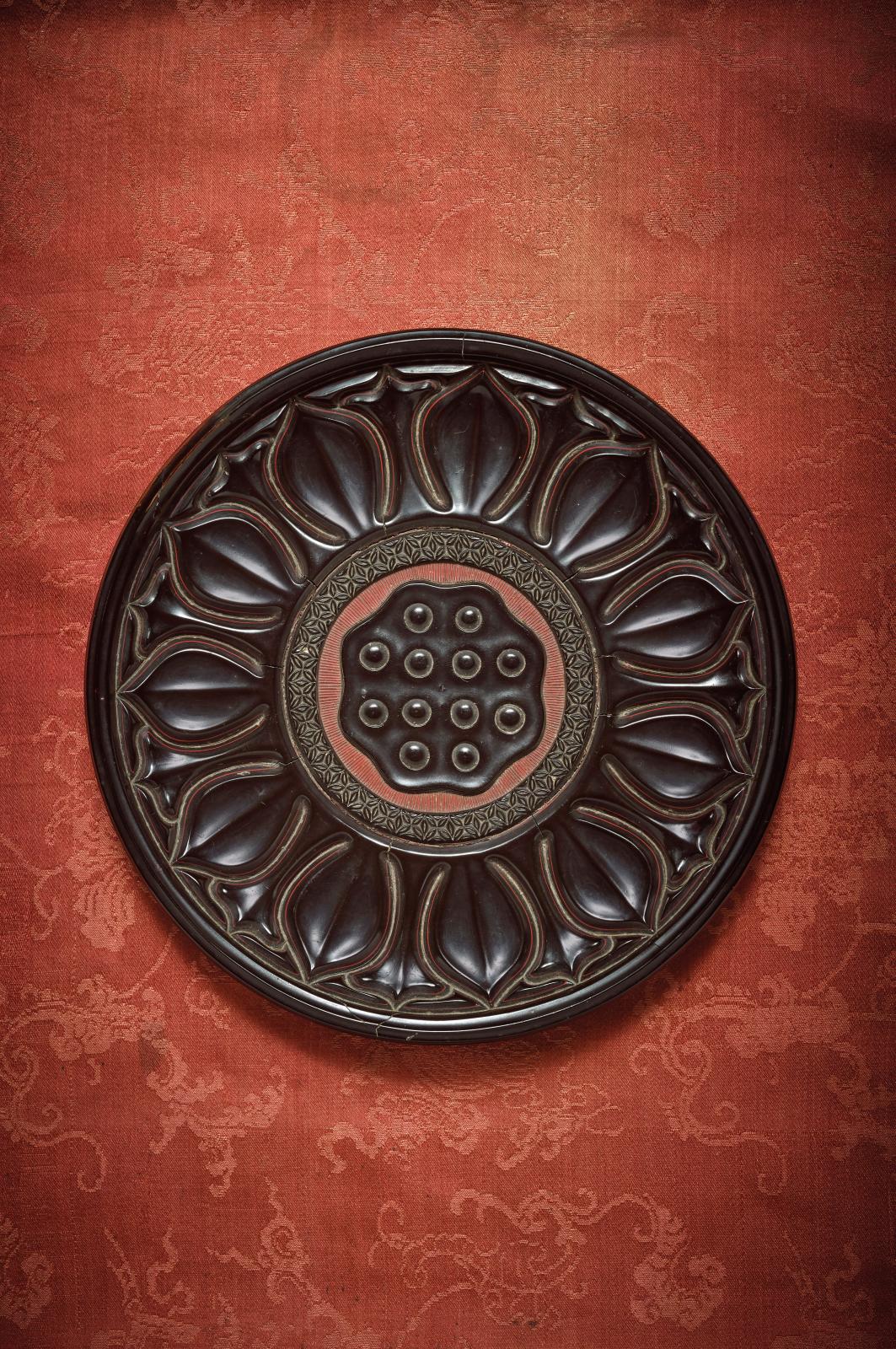 Could it be a hunt button, or perhaps a handle from an exquisite cabinet? This object is a distinct conundrum even for our most informed readers, because it is not easy to identify a lacquer tray in this 17.4 cm diameter disc dating back to the Chinese 14th century, from the late Yuan or early Ming period. So, coming up for auction we find an item in the delicate form of a lotus flower, symbolising virtue: a speaking example of a technique that reached the peak of magnificence in the 14th century. The transition years between these two periods saw the status of lacquer rise from simple decorative use to the object of imperial desire. The Gegu Yaolun, a treatise on antiques and collections, states: "[…] during the Yuan dynasty, well-to-do households commissioned lacquer objects without imposing a time limit for their creation." This gives an idea of the freedom enjoyed by lacquer craftsmen, and their privileged status. As it happens, the object here bears the name of one the most acclaimed: the great Zhang Cheng, whose dates are a matter for debate. He is known to have officiated under the Yuan, and it is highly likely he was active during Hongwu's reign (1368-1398) and possibly even the beginning of Yongle's (1403-1424), which would demonstrate impressive longevity. He owned a workshop in the Xifang district in Jiaxing, the centre for carved lacquer work. His name appeared for the first time in the above-mentioned treatise, written in 1388 by Cao Zhao and translated in 1971 by Sir Percival David in London. Another established fact: during Yongle's reign, the Celestial Empire carried out diplomatic missions with its close neighbours and more distant regions before its isolationist withdrawal. The Son of Heaven notably sent gifts to the shogun Ashikaga in Japan, as attested by a document stating that 253 carved red lacquer pieces were offered as presents to the ruling class. (Several of these are now in the archipelago's museums.) This would explain the Japanese origin of the wooden box housing the tray. In any event, the object travelled a long way to end up in a European collection.

ASIAN ART
Salle 16 - Drouot-Richelieu - 9, rue Drouot - 75009
Tessier & Sarrou et Associés
Info and sales conditions
Catalogue
Salerooms
Results
News feed
See all news
Paris Photo launches its New-York edition
First Donald Judd's US retrospective in over 30 years
Tefaf Museum Restoration Fund's grant goes to the V&A and LACMA
Resignation of the Uffizi's scientific committee
Not to be missed
Pre-sale
Robert Beauvillain: the love of illustrated books
A chance to savour the exquisite Hours, early printed works and…
Pre-sale
A radiant bull
The clearly-identifiable creature, accompanied by symbols, expresses…
Pre-sale
Watch out for these!
A Parisian collector assembled this set of thirteen timepieces over…
Pre-sale
Back to nature
Combining spontaneity and sophistication, this work by Léonard Foujita…