Aiming to demonstrate his virtuosity, Noël Hallé painted his vision of this episode in the biblical patriarch’s life for the 1763 Salon. A work of true bravery, this painting bears witness in a new, softer way. 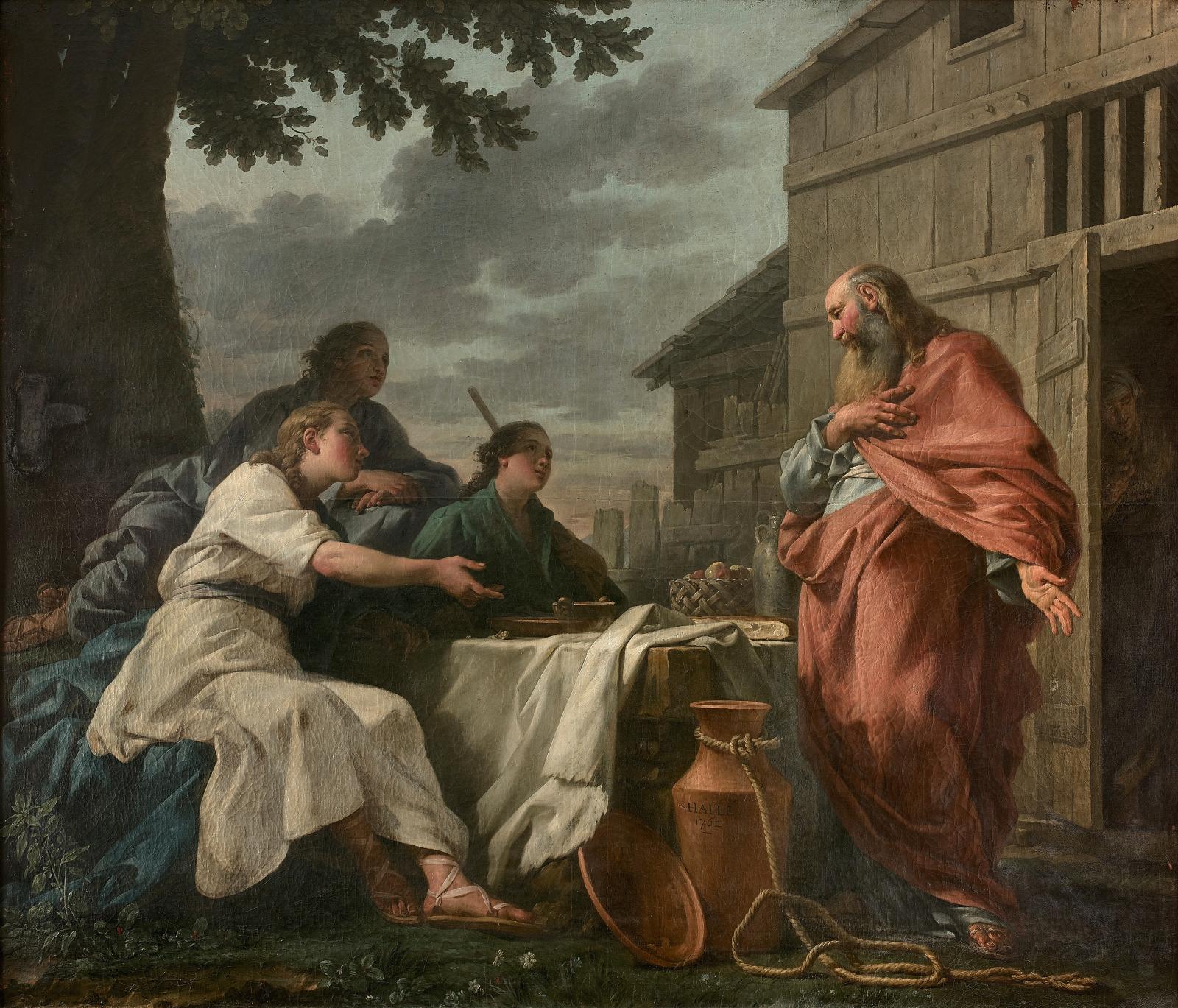 A key episode of the Old Testament, the story of Abraham and the three angels has often been depicted by artists, from the mosaics of Monreale, Sicily, to Marc Chagall. The painter Noël Hallé also gave his version, imbued with the 18th century’s elegant vivacity while scrupulously complying with the text of Genesis 18:1–33. In the guise of three young men, the celestial creatures introduce themselves to Abraham. As is customary, the patriarch washes their feet with a jug and a bowl in the foreground. After being invited to share a meal under a tree, the angels tell him that his barren, 80-year-old wife Sarah will soon give birth to a son, who was to be called Isaac. One of the best interpreters of the rococo style in painting, Hallé inscribed the narrative in a clever pyramidal composition, animating his characters with theatrical gestures specific to the sensibility of the time. However, the work marks a step on the artist’s journey, which seemed to be getting more relaxed and shifting towards more balance. The palette is part of a new serenity. “The setting sun,” says Hallé specialist Nicole Willk-Brocard, “illuminates the faces, sky and clouds with shades of pink and grey. The colouring is soft and harmonious.” The fact that this spectacular work (243 x 259.2 cm) was painted for the 1763 Salon (as number 18), where the neoclassical aesthetics of some paintings had already won over some viewers, is not unrelated to the softer shapes and colours. Critics unanimously praised Hallé; only the most famous among them, Denis Diderot, hated it. “You bore me, Mr Hallé, you bore me!” he wrote. Despite this negligible opposition, Hallé was successful at the height of his career, and received royal commissions, such as the luminous Race between Hippomenes and Atalanta (1765), now at the Louvre.

Ancient Tables
Salle 4 - Drouot-Richelieu - 9, rue Drouot - 75009
Millon
Info and sales conditions
Catalogue
Salerooms
Results
Newsfeed
See all news
Due to the summer holidays there will be a pause in the newsfeed. We will be back Monday, August 24th. Have a wonderful summer vacation!
Met Museum in New York acquires Wangechi Mutu sculptures
US House of Representatives vote to create a national museum dedicated to Latin Americans
Church volunteer confesses to starting the Nantes Cathedral fire
Not to be missed
Pre-sale
Figurative art from van Goyen to Combas and the inescapable…
This 1955 work by Bernard Buffet belongs to a series of around 10…
Pre-sale
Henri Lebasque, painting the zest for life
His soft, nuanced palette captures moments of simple happiness on…
Pre-sale
The Gilles Labrosse collection: fashion throughout the…
Amassed by an impassioned enthusiast, one of the largest private…
Pre-sale
Achille Laugé: Cailhau in perspective
Found during an inventory carried out for an estate in the Var,…