Trauner: a cinema icon under the hammer

Though the name of this unobtrusive man is still little-known, Alexandre Trauner was a key figure in the history of film and photography. Drouot is now selling his archives. 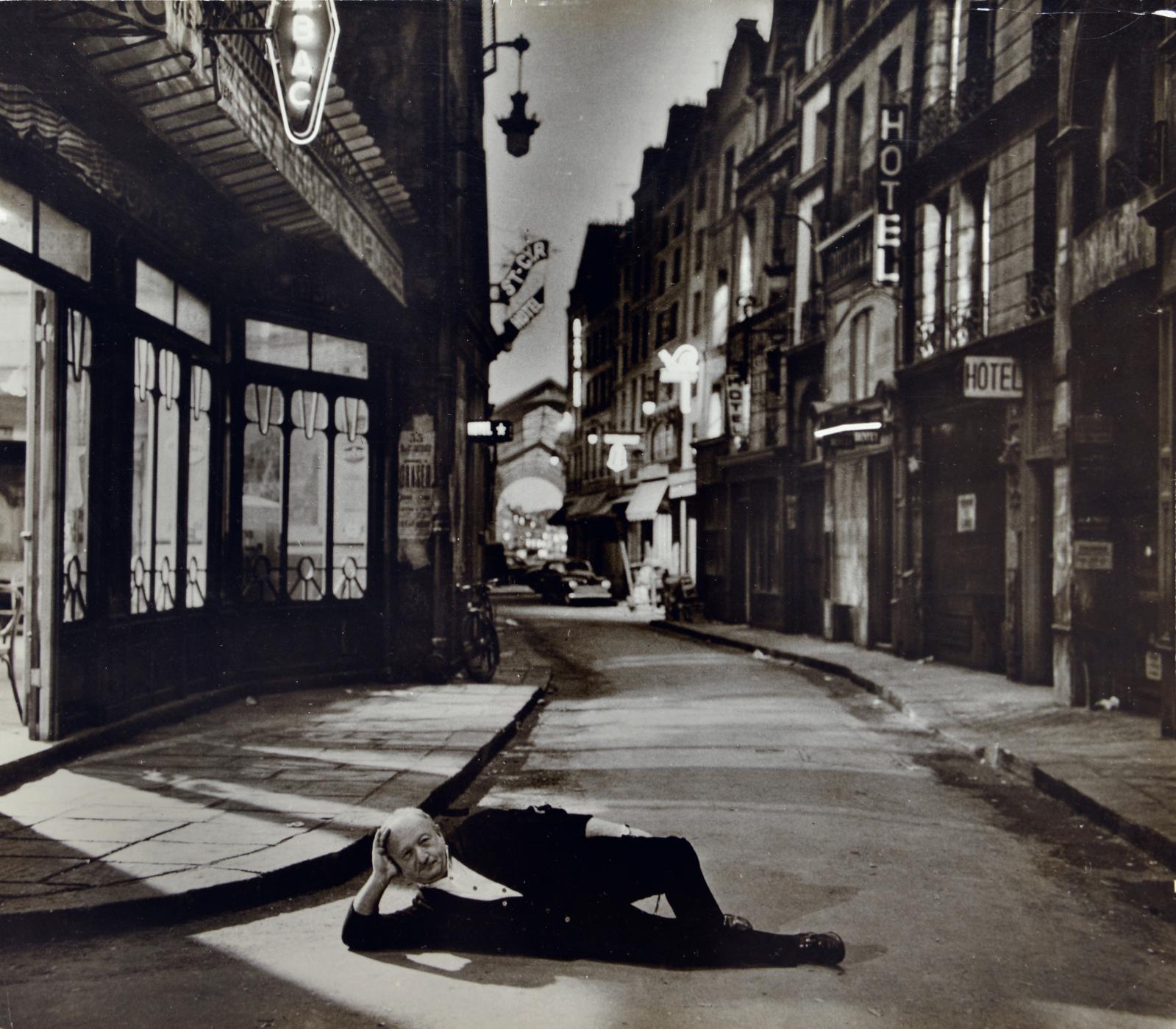 For Orson Welles, Billy Wilder and Howard Hawks, he was the greatest set designer of all. The sale staged on 16 October by Alexandre Giquello (with Serge Plantureux as expert) is a real immersion in the golden age of the cinema. Alexandre Trauner was an iconic figure in this world, but one who always stayed in the background, even after receiving an Oscar and several Césars. In December 1993, he joined his longstanding friend Jacques Prévert in their final resting place in the cemetery of Omonville-la-Petite, the Normandy village where they had lived as neighbours. "They were both poets who were painters," to quote his wife, Janine Trauner.
In the 1930s, Prévert presented the young immigrant to Marcel Carné, with whom Trauner worked on all his major films before being taken on by his American counterparts, for shoots in first Europe, then Los Angeles. The sale is offering affordably-priced shots of this work covering several decades and dozens of personal photographs, set designs and sketchbooks, as well as his mementoes of the film and Realist photography worlds.

Set designer and photographer
Sandor (his original first name) was born in 1906 into a Jewish family in Budapest, and lived through the terrible years of the Great War and Horty's Fascist regime. He studied painting at the Hungarian Royal Drawing School before fleeing to Paris in 1929. He then joined the studios as set decorator for Lazare Meerson, who had worked with Marcel Lherbier, Jacques Feyder and particularly René Clair. Meerson had a lasting influence on his view of the cinema, and Trauner became the most faithful exponent of "poetic realism". In his eyes, a good professional's task was to produce not "magnificent sets" but "minimum construction" to express "maximum truth," as he told Teri Wehn-Damisch, who made a documentary on him. The viewer's attention should be "focused on the action, on the actors and their ephemeral life," not on the set. He was also friends with Doisneau, Cartier-Bresson and Brassaï, whom he assisted on his night-time excursions in Paris with a magnesium bulb reflector he had made. "Trauner was first and foremost a painter and set designer, but photography always underpinned his work," says exhibition curator Monique Plon, who became a friend during his last years, when she would go and explore his archives. "He always went around with a Leica around his neck. He kept records of all the countries he visited, and these photos helped him in his search for locations, which he would photograph. Once his sets were finished, he would take pictures of them. And he always photographed shoots on the set. Once, at the end of an interview, when he was asked for a final comment, he said "Long live photography!" The sale also sheds light on a France now long-gone, like Les Halles in Paris (whose disappearance and the subsequent urban disfigurement he mourned), the brothels of the 1930s (fourteen prints for €200-300), and the Quai de Dunkerque and Quai de Brest before the destruction of 1945 (for Quai des brumes, or Port of Shadows). He used his pictures of the east Paris canals to reconstruct the footbridge for Hôtel du Nord in the studio. A watercolour and gouache on card for a model for Drôle de drame (Bizarre, Bizarre) has an estimate of €1,000/1,200. A study for the Chez Moustache café in Irma la douce (€200/300) highlights this nostalgia for a larger-than-life working-class Paris.

A marksman on the roof
Trauner travelled the world, fired by the same love of detail. For Billy Wilder, with whom he worked on the hilarious One, Two, Three and who persuaded him to work in Hollywood for several years, he crisscrossed the grim Berlin of the dictatorship. He used a study of Baker Street with two hansom cabs (€2,000/3,000) for Wilder's Private Life of Sherlock Holmes. For Anatole Litvak, he captured war-torn Warsaw. A drawing of tanks moving into the street for Litvak's Night of the Generals is estimated at €300/400. The artist went with Fred Zinnemann to the Congo and Spain, as witness his photograph of a marksman on a roof (€100/150). There is also a portrait of Orson Welles in armour in 1948 in Essaouira, where he used a fish shop as a set in Othello (€300/400). His portraits on offer at Drouot include Gérard Philipe in Les Baux-de-Provence, Howard Hawks on the Nile, and Jacques Prévert in various places, the inevitable cigarette dangling from his lips, including in front of his portrait by Picasso.
The sale also contains photographs by his friend, like the view of a now destroyed Shanghai by Pierre Verger (between €400 and €3,000), who travelled with Robert Siodmak to China at Trauner's request (he was unable to go himself), and Henri Manuel's poignant images of penal colonies for minors (between €800 and €2,000). Mementoes feature a copyright contract signed by Pathé with Prévert and the composer Joseph Kosma in 1943 for Les Enfants du paradis (Children of Paradise), for which Trauner designed the sets in the Victorine studios in Nice. Protected by his friends, he continued to work, going into hiding into the mountains near Tourrettes-sur-Loup if need be, as witness the drawings here of the Hermine boarding house, the Rouge-Gorge inn and the scene of the Comte de Montray's murder in the Turkish baths. The dark studies for the sets for Portes de la nuit (Gates of Night) by Carné and Prévert are valued at €3,000/4,000. The sale has a large number of typewritten scripts, like the one for the 1946 fairytale cartoon Le Roi et l’oiseau (The King and the Mockingbird) by Prévert and Paul Grimault, with a synopsis in English (€600/800). In the US, Trauner had to reinvent himself when confronted by Welles and Hitchcock. His return to France came too late for him to be involved in the New Wave. But he was still in demand until the Eighties, remaking an almost perfect model of the Blue Note Club for Bertrand Tavernier's Autour de Minuit (Round Midnight).

ALEXANDRE TRAUNER (1906-1993) and his circle : PHOTOGRAPHS, MOVIE SETS, documents
Salle 2 - Drouot-Richelieu - 9, rue Drouot - 75009
Binoche et Giquello
Info and sales conditions
Catalogue
Salerooms
Results
News feed
See all news
Visionary artist Christo has died at his home in NY at the age of 84
The Musée de la Monnaie de Paris will be free in June
Reopening of the Louvre Museum
Staggered reopenings for the museums in France
Not to be missed
Pre-sale
From the monumental paintings of Carmontelle to a monumental…
Initially planned for Sunday, March 29, this sale will be offering…
Pre-sale
Captivating Book of Hours from the golden age of min…
Attributed to the Master of Luçon, this Book of Hours from the Beauvillain…
Pre-sale
Classics from Van Cleef & Arpels
The beauty of natural stones by Van Cleef & Arpels in a set from…
Pre-sale
Jewellery from the Janine Saladin Collection
Around ten pieces of jewellery by Suzanne Belperron owned by a trailblazer,…