An icon of Hemba sculpture

This noble, powerful, serene statuette with a strong personality tells the story of its African ancestors. 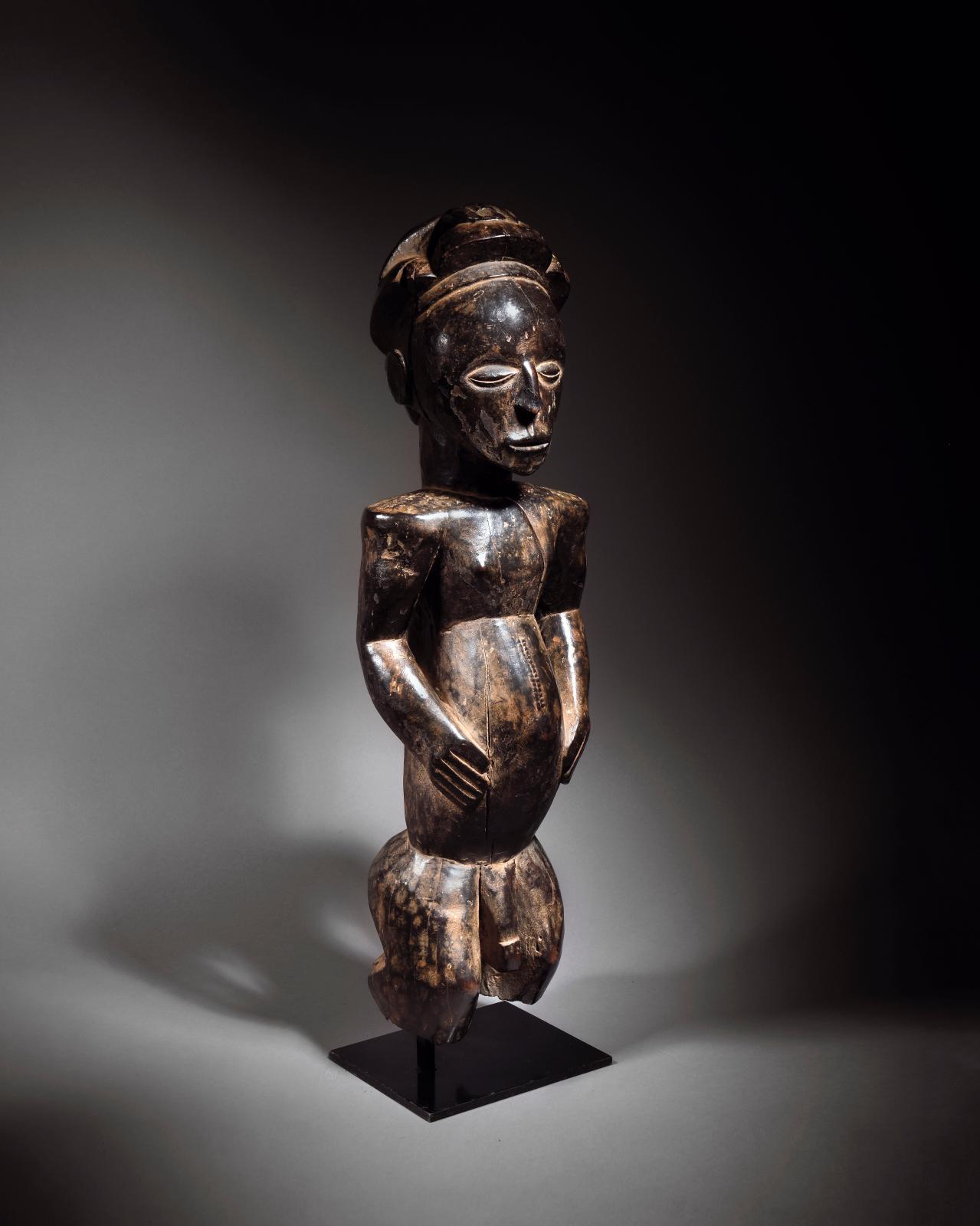 The Hemba civilisation originated in Central Africa, in the southeast of what is now the Democratic Republic of the Congo. Its location in the fertile Luika River valley fostered the development of a structured society, in which an art form closely linked to the prestige of large families flourished, the oldest of these families going back as many as 15 generations. This statuette bears witness to this art form, depicting an ancestor whose aura is reflected in a perfectly recognisable aesthetic. The softness of the sculpted face, with its introspective expression, contrasts with the body’s clear, sober volumes and square shoulders. Its waist, arms and hips are strongly delineated. This ancestor looks like a quiet, intangible force endowed with wisdom, as his high forehead shows. The pose itself is significant. Placed flat on either side of a bulging, disproportionately sized belly, the symbol of life, his hands emphasise the womb that unites the ancestor to his clan, which he watches over maternally. He keeps one half-closed eye on the past, the other on the future. Thanks to him, the Hemba can sleep in peace. For his memory to be celebrated in this way, the now-nameless ancestor must have been very important during his lifetime. His hairstyle evokes his primordial role as a nurturing guide: arranged in a characteristic cruciform pattern, the braids contain a space to keep and transport the clan’s treasure–seeds intended for planting in new lands during seasonal migrations. As the guardian of his group’s survival, he deserves to be dutifully honoured as expected through his effigy, which would have been kept in a funerary niche or the dwelling of a clan chief, who relied on this tangible proof of his noble lineage to legitimise his family’s rank and its presence in a given area. The vertical corn ear scarification of the abdomen and the type of hairstyle, one of the many variations found in the various Hemba chiefdoms, allows this statuette to be attributed to the Niembo group, which has crossed the centuries with it.

There aren't very many of them in this ethnic art sale, so a fly whisk from the Austral Islands and a Moai Kavakava statue from Easter Island should prove popular. 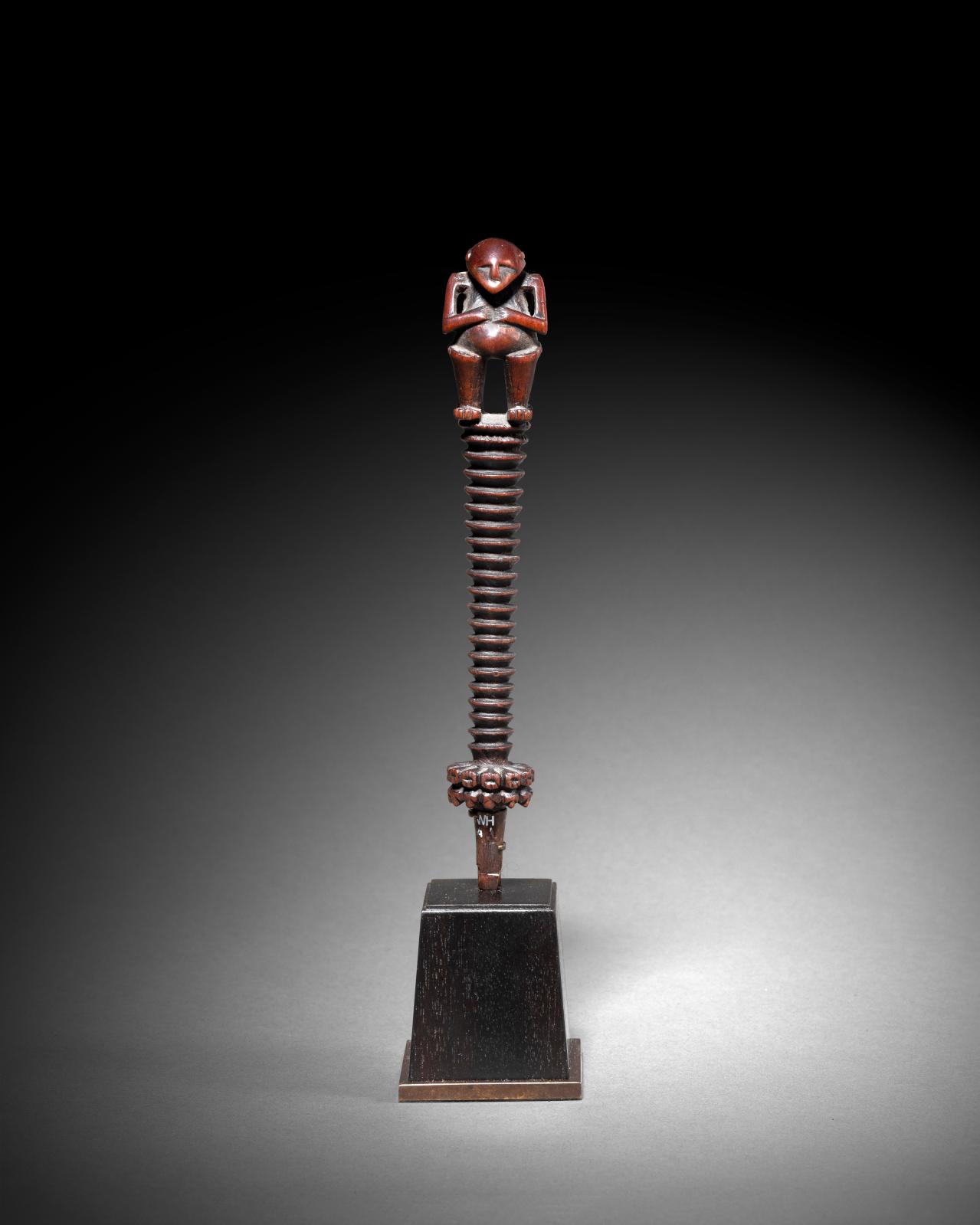 Mentioned by James Cook in 1769 during his first voyage to the Pacific, the Austral Island archipelago lying 600 km from Papeete was not easy to reach, so though it received a few visitors, it was not a port of call on maritime routes. However, it had a thriving trade with Tahiti. This is probably where the English explorer bartered his first fly whisks for nails and metal objects, more precious than leaves, stones, sharks' teeth and coral for carving and sculpting. It was long thought that these objects were used to keep insects away from food, as nothing was considered more repulsive in Polynesia than flies getting into the mouth. But many scientists now think that these accessories (one of which was found with pieces of pearl oyster shell) were used as bells and shaken during religious ceremonies. The rattle here, probably 18th century, judging by its style and patina, stands out for its smooth forms and refined grain. Between the bodies of the twin figures there is a hole for threading a string, designed to hold the shells used as bells. The feet stick out from a circular column of twenty rings over a double frieze of stylised pigs' heads – an animal both wild and domestic, synonymous with wealth. This fly whisk (€130,000/180,000) was part of the collection of husband and wife dealers Hélène and Henri Kamer in the 1950s and 1960s, and should now appeal to a circle of American, Canadian and European collectors. From the same part of the world, there is also an Easter Island Moai Kavakava statue made of driftwood. This representation with its prominent ribs is typical, but also unusual for several highly precise details, including three fish engraved in the top of the skull – probably the totems of the tribe who commissioned the object. An orifice at the back of the head reminds us that these statuettes were hung in clusters around the necks of Easter Island notables as protection. But you will need around €400,000 to €600,000 to land this talisman…

AFRICAN ART
Salle 9 - Drouot-Richelieu - 9, rue Drouot - 75009
Binoche et Giquello
Info and sales conditions
Catalogue
Salerooms
Results
Newsfeed
See all news
The Hotel Drouot reopens its doors on December 5th.
Museums in France Reopen Dec 15 with Protocols in Place
Stars rally behind “Show Me the Signs” benefit art auction
Artwork by Diana Velásquez Adorns Grand Palais Evokes Pandemic
Not to be missed
Pre-sale
The Miracle of Cranach
This Conversion of Saint Paul by Lucas Cranach the Younger has a…
Pre-sale
Brassaï and the Giacometti Brothers: a Close Friends…
A pair of chairs by Diego Giacometti and a lamp by his brother Alberto,…
Pre-sale
Nature According to Aloys Zötl
Aloys Zötl's almost always unmistakable watercolors of animals attest…
Pre-sale
Christo Ties Up the Pont-Neuf
As a tribute to the recently deceased master of land art, this composition…