The Coveted Gifts of Louis XIV 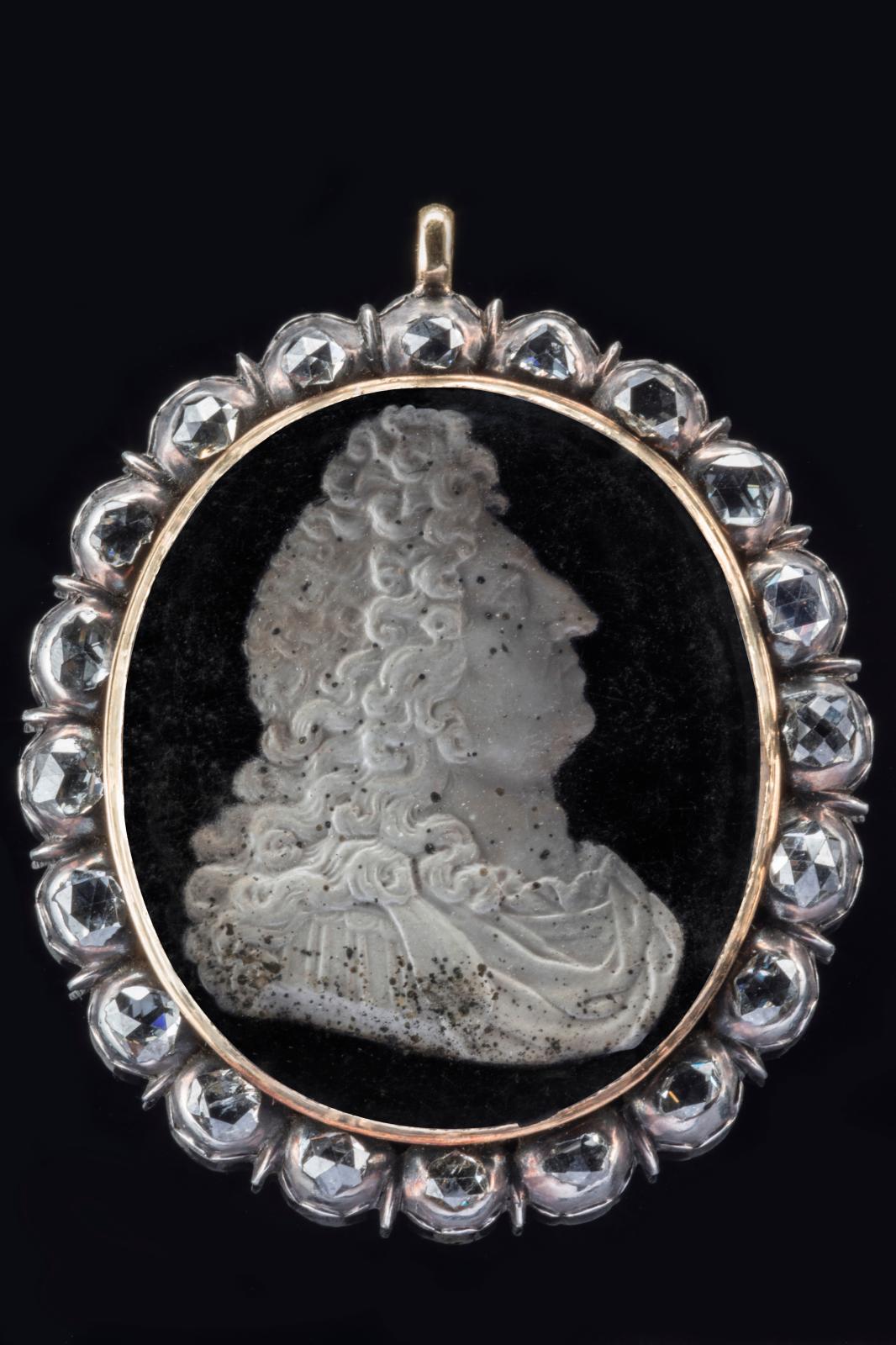 Louis XIV portrait box in gold, embellished with an antique-style profile of the Sun King in moulded enamel imitating a cameo, and on the back with his enamelled monogram, silver mount ornamented with twenty rose-cut diamonds, probably from the Golkonda mines, gold ring, h. 4.8, l. 3.9 cm.
Estimate: €60,000/80,000

Louis XIV portrait box in gold, embellished with an antique-style profile of the Sun King in moulded enamel imitating a cameo, and on the back with his enamelled monogram, silver mount ornamented with twenty rose-cut diamonds, probably from the Golkonda mines, gold ring, h. 4.8, l. 3.9 cm.
Estimate: €60,000/80,000

This is a glittering jewel from every point of view. Certainly in terms of the diamonds forming a rich halo around the portrait of the Sun King, whose profile stands out like a Roman emperor in white on a black background. The medallion is one of a highly specific series of objects: a fashion launched by Louis XIV in the 1660s. They were called "King's portrait boxes" and most had a single purpose: to be an official gift. Inventories reveal that no fewer than four hundred of these were distributed throughout his reign by the man who transformed Versailles. Some were given to various loyal servants of the State and men of war – like the one here, presented to Captain Alain Porée (1665-1730) as a reward for the naval victories of this brilliant French corsair, and devoutly passed down in his family until the present day.

A Much-coveted Distinction
We should explain what is meant by a "King's portrait box". It was a luxurious locket in various geometric forms covered in embossed or gilded leather, containing an exquisite medallion with the royal effigy. The jewel was typically embellished with diamonds, and the ones here probably came from the legendary mines of Golkonda, a city in the present-day state of Telangana, India, which also produced the fabulous Koh-i-Noor and the Regent diamonds. To date, this portrait box is one of the very few that still possesses its adorning stones. Only two others are extant. One is now in the Louvre, and dates from between 1680 and 1690; it was bought for €481,000 at the Pierre Bergé/Yves Saint-Laurent sale in Paris on 24 February 2009 (Christie’s), and sports ninety-two diamonds. The other (dated 1678), now in the Museum of the History of Bologna, was given to the Italian poet Malvasia in 1681. Other lockets were not so fortunate – the one in the Art Museum of The Hague only consists of the silver mount. The reason was simple: many of these stones were removed by their recipients, because they were "an effective means of obtaining money", as we learn from Brice Langlois of the Rouillac auction house.

The Art of Paris's Top Specialists
Although it has no stamp or signature, the royal object can almost certainly be attributed to three outstanding artists in Louis XIV's service. The way the piece is worked and its mount point to a dynasty of Parisian goldsmiths: Laurent Le Tessier de Montarsy (?-1684) and his son Pierre (1647-1710), to whom the box in the Louvre is attributed. They were the chief suppliers of these costly boxes for over twenty years. Here they produced an extremely simple setting reflecting the social and political context of the 1690s, marked by the financial problems due to the League of Augsburg war.
The principle of restraint is confirmed by the magnificent central element: this cameo portrait of the king turns out to be a strange trompe-l'œil – because it is not a carved semi-precious stone, like agate or sardonyx, but moulded enamel. The other "portrait boxes" that have come down to us are embellished with miniatures, most of them executed by the virtuosic Jean I Petitot (1607-1691). This less-expensive ornament was the invention of a Swede, Jean-Frédéric Bruckmann who set up in Paris in around 1694. There he developed a technique, which rapidly became successful, involving moulded enamel based on a medallion relief.
We know from a receipt dated 1696 that this medallion was one of twelve commissioned enamelled pieces for which Bruckmann was paid 720 livres. The matrix could have been obtained from a medallion by the sculptor Jean Mauger (1648-1722). To date, only two other moulded portraits are listed: one is in the Musée Patek Philippe in Geneva, and the other in a private collection.

32th GARDEN PARTY SALE - I
Montbazon - Château d'Artigny, 92, rue de Monts - 37250
Rouillac
Info and sales conditions
Catalogue
Newsfeed
See all news
Work Finishes on the Medieval Guildo Château on Brittany’s Coast
Never-Before-Seen Ceiling Painting by Eugène Lami Discovered at Château de Chantilly
Largest Ever Exhibition of Bob Dylan’s Artwork to Debut this November in Miami
Stockholm University Archaeologists Uncover Moat in the Viking Town of Birka
Not to be missed
Pre-sale
The Truly Sculptural "Crash" Watch by Cartier
Cartier's "Crash" watch is legendary for not only an extraordinary…
Pre-sale
Bernard Buffet in Amiens
Accompanied by a certificate of authenticity from the Maurice Garnier…
Pre-sale
Emile Claus Tames the Thames
Often classified as a painter of rural life, Belgian artist Émile…
Pre-sale
On the High Seas with Marin-Marie
Marin-Marie, an outstanding seascape artist, appears once more at…