Literature, Guest of Honour at the Fifth Aristophil Sale

This round of sales of the famous collection, featuring manuscripts, first editions, art bindings and drawings, will shed new light on great 19th-century writers. 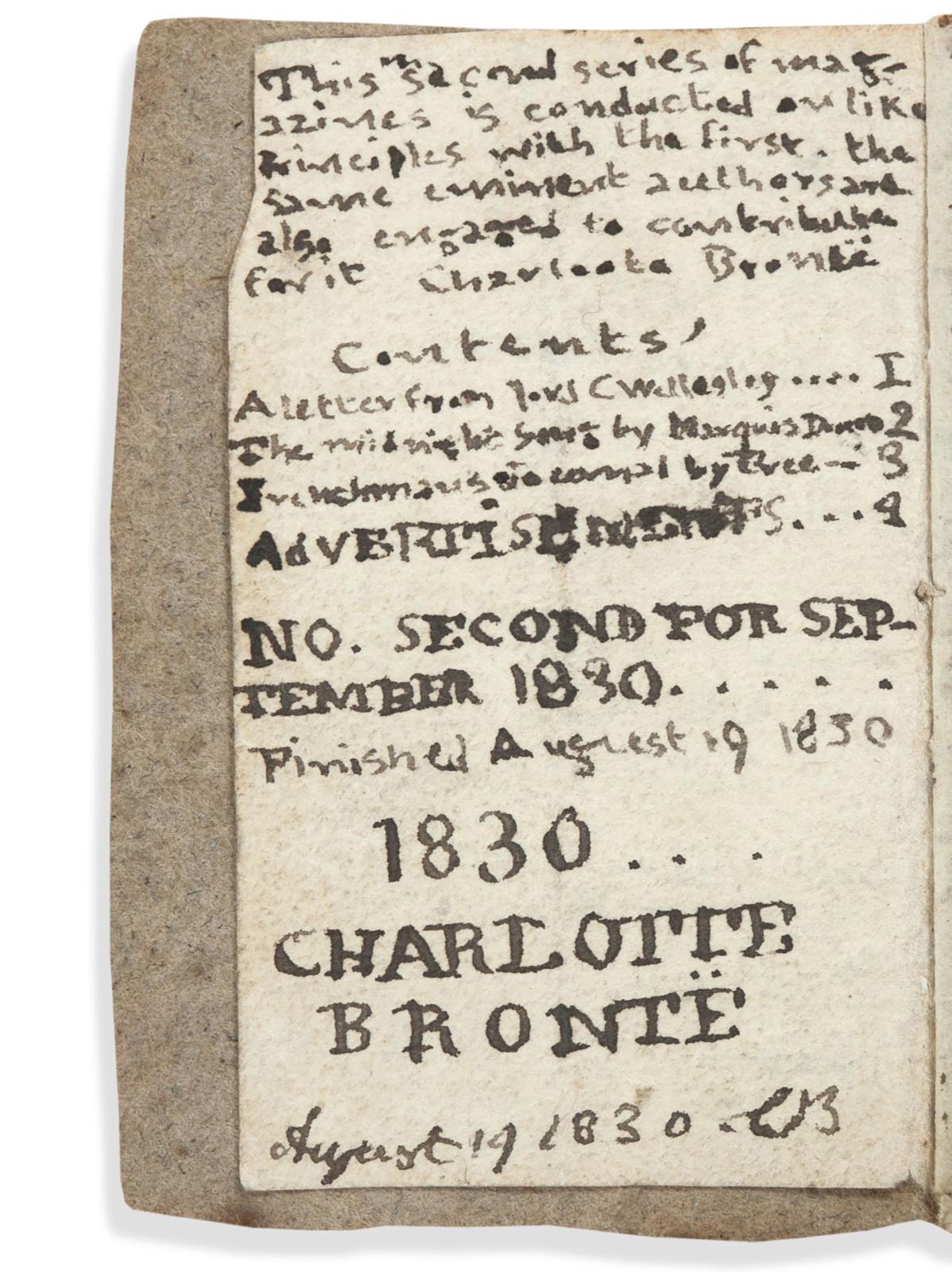 A new chapter is opening in the saga of this seemingly inexhaustible collection. This time, the organisers – the four auction houses for the Aristophil collections, Aguttes, Artcurial, Drouot Estimations and Ader – placed it under the aegis of literature. Surprise guests – politicians, scientists and soldiers – will join great writers, mostly in the french language. But an extraordinary British piece will start the proceedings on Monday 18 November: an unpublished autograph miniature manuscript, Second Series of The Young Men, written by the precociously talented, 14-year-old Charlotte Bronte in August 1830. Presented by Aguttes, "this very small book (3.5 x 6.1 cm), which has over 4,000 words on just 19 pages, attests to the incredible creative activity of the four Bronte children, isolated in their father’s parsonage in Haworth,” says Thierry Bodin, the sale’s expert. Purchased on 15 December 2011 at Sotheby's London for £690,850, it should be the sale’s highlight, estimated at between €600,000 and 800,000. Other documents in this first sale called "Britannica-Americana" are various scientific works from Great Britain and North America. Mark Catesby’s illustrated book on fauna and flora, the Natural History of Carolina, Florida and Bahama Islands, published in 1754, is estimated at €40,000/50,000. Over a century later, in March 1886, Thomas Edison made six captioned drawings on improving his most famous invention, the electric light bulb (€50,000/60,000). Conducted by Aguttes, the day’s second sale will focus on history. A group of manuscripts Napoleon dictated to his librarian on Saint Helena for his Memoirs and corrected by his hand (€30,000/40,000) will bring the Napoleonic Age back to life.

The roads of writing
On tuesday 19 November, Artcurial will feature correspondence between major 19th-century writers, who held each other in high regard. The most representative are the 34 autograph letters Gustave Flaubert wrote to Guy de Maupassant between 1870 and 1880 (€50,000/70,000). “They recall Flaubert’s almost paternal affection for Maupassant," says Bodin. In 1875, Flaubert even proofread a manuscript that Maupassant had sent him, a play called La Trahison de la comtesse de Rhune (€30,000/50,000). The author of Madame Bovary also wrote to Émile Zola: 33 letters are available for €40,000 to €50,000. The giant of the century, Victor Hugo, is represented by 100 lots, including the original proofs of his masterpiece Les Misérables, printed in 1862 and corrected by his hand (€40,000 to 60,000). In 1840, Honoré de Balzac corrected the proofs of his novel Pierrette, which was later included in La Comédie Humaine. The price should reach €40,000/60,000.

Unique documentation on the Académie française
In 1830, Hyacinthe Pellevé de La Motte-Ango, marquis de Flers (1803-1866), started a collection on the history of the Académie française. Since then, Bodin says, "five generations of marquis de Flers have enriched this group of over 7,000 letters, manuscripts and documents, the most complete ever accumulated on the venerable institution." In 2009, Aristophil bought the collection, which will be dispersed here in two sales. The first, conducted by Drouot Estimations on Wednesday 20 November, spans the academy’s history from 1634, the year it was founded, to 1793, when the National Convention abolished it by decree. The catalogue includes many manuscripts, speeches, eulogies and records of bequests, such as these lines written by Pierre Corneille on 12 February 1663, among others (€20,000/25,000). Documents in his handwriting are extremely rare, but we will have another example, from July 1652, signed by him and his brother Thomas: a letter settling a division of property (€30,000/40,000). Orchestrated by Ader on Thursday 21 November, the sale will focus on the second part of the Academy’s history, the name of which was restored by royal decree on 21 March 1816. The great writers of the time coveted a seat in its hallowed amphitheatre. For example, on 15 September 1848 Balzac wrote a letter requesting the seat left vacant by the death of Chateaubriand, which he did not obtain. Its price is estimated at between €10,000 and €15,000.

Cocteau, the polymorphous magician
The Drouot Estimations auction on Wednesday 4 December will pay homage to Jean Cocteau. Most of the pieces in this unique group belonged to Carole Weisweiller, the daughter of Francine, the famous patron and faithful friend of the director of Beauty and the Beast. It includes the complete autograph manuscript of Parents terribles written in Montargis and dated "6 h du matin 22 février 1938". The manuscript features a title page with a beautiful drawing, which should boost the price to  €15,000/20,000, and poetry in the author’s handwriting. Cocteau’s correspondence with Princess Nathalie Paley, probably the only woman he loved enough to marry, reveal his deepest feelings (€15,000/20,000).