Who is this big red man with an athletic build? The Modulor, a kind of universal master standard for housing and furniture that Le Corbusier developed between 1942 and 1950. 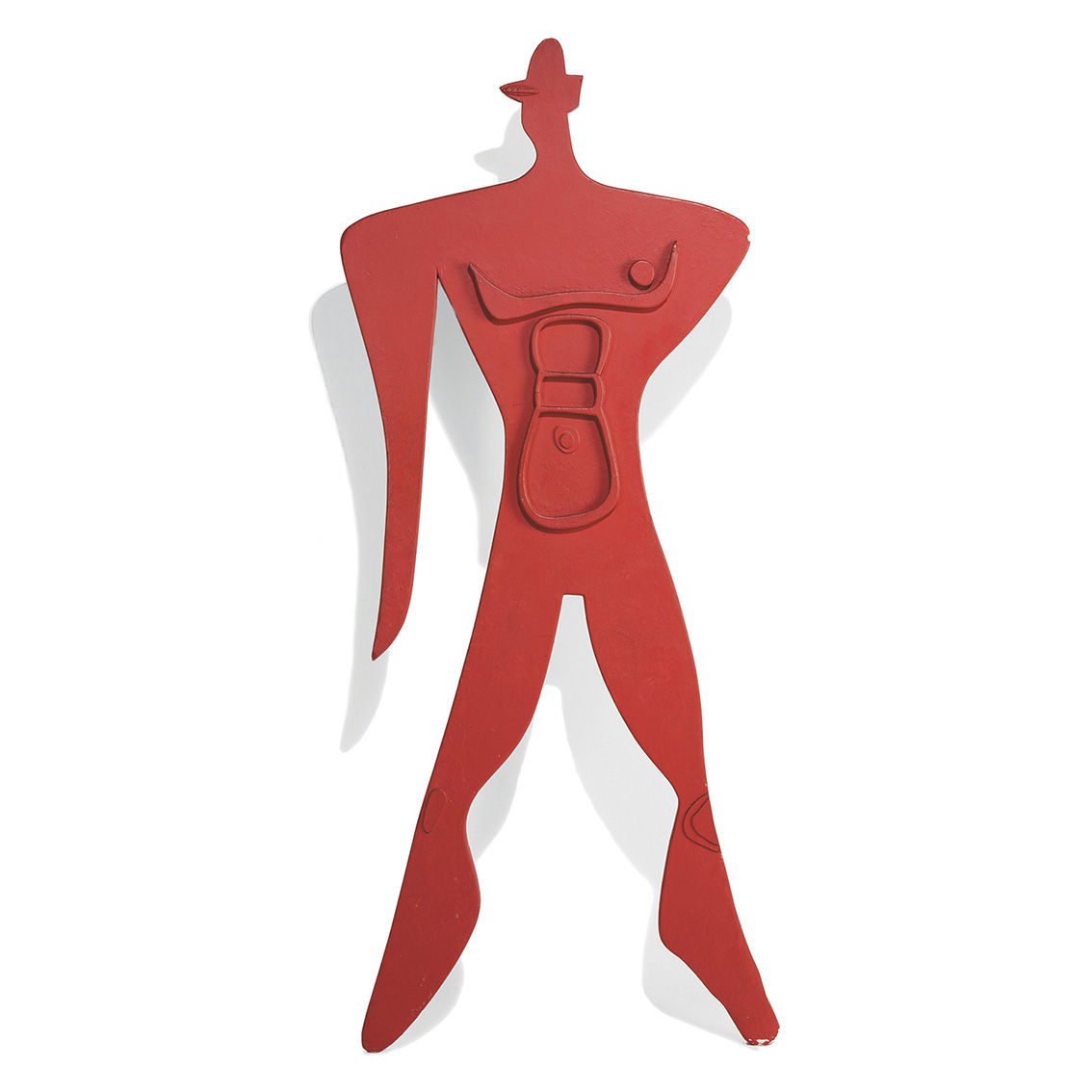 In Roquebrune-Cap-Martin during the summer of 1958, two Modulor figures, one with his arm raised, the other with his arm lowered, were drawn on Novopan panels and their parts highlighted by Le Corbusier. They were then cut out and painted by Charles Barberis, a Corsican-born carpenter based in Villeneuve-Loubet on the Côte d'Azur, to manufacture and deliver the numerous orders from the architect's building sites. This human silhouette is the outcome of many years of mathematical, morphological and humanistic research. It took shape in 1950 with the publication of an essay. Another essay five years later contained applications, critiques and a discussion of this Modulor, which had become indispensable to its inventor.

The Claude-et-Duval hosiery in Saint-Dié-des-Vosges, Cité radieuse in Marseille, La Tourette convent, Jaoul houses in Neuilly-sur-Seine, institutional buildings of Chandigarh, India, Ronchamp chapel and cottage in Roquebrune-Cap-Martin—the archetype of the smallest unit (3.66 by 3.66 meters square and 2.26 meters high, 12 x 12 and 7 ft), clad in wood and lit by two windows—prove that the Modulor is suitable for all structures.

Le Corbusier gave Charles Barberis both cut-outs, which he displayed at his company until 1965. The Centre Pompidou acquired the one with the raised arm several years ago. Ours was given to Guy Rottier (1922-2013), an architect who worked with Le Corbusier.

20TH CENTURY DECORATIVE ARTS & DESIGN
Espace Tajan - 37, rue des Mathurins - 75008
Tajan
Info and sales conditions
Catalogue
Newsfeed
See all news
Katerina Gregos Named Director of National Museum of Contemporary Art in Athens
Over half of UK Museums and Galleries Are ‘Concerned About Long-Term Survival’
Feminist Artist Mary Beth Edelson Has Died at 88
French Art Dealer Hélène Greiner Has Died
Not to be missed
Pre-sale
Pierre Klossowski and André Gide: When Drawings Become…
Pierre Klossowski (1905-2001) is among the headliners at a modern…
Pre-sale
Love Through the Eyes of Boucher and Watteau
The top results of this classic sale could be posted in the early…
Pre-sale
Cartier's "Mystery Clock"
This monumental Art Deco timepiece in rock crystal, onyx and marble,…
Pre-sale
The Style of French Architect Charles Percier
One of Charles Percier's earliest drawings, which he made in Rome…