An American in Concarneau France

Charles Fromuth, who moved from the United States to Brittany, had just one passion: painting boats. A rare group of 46 pictures reveals his avant-garde talent. 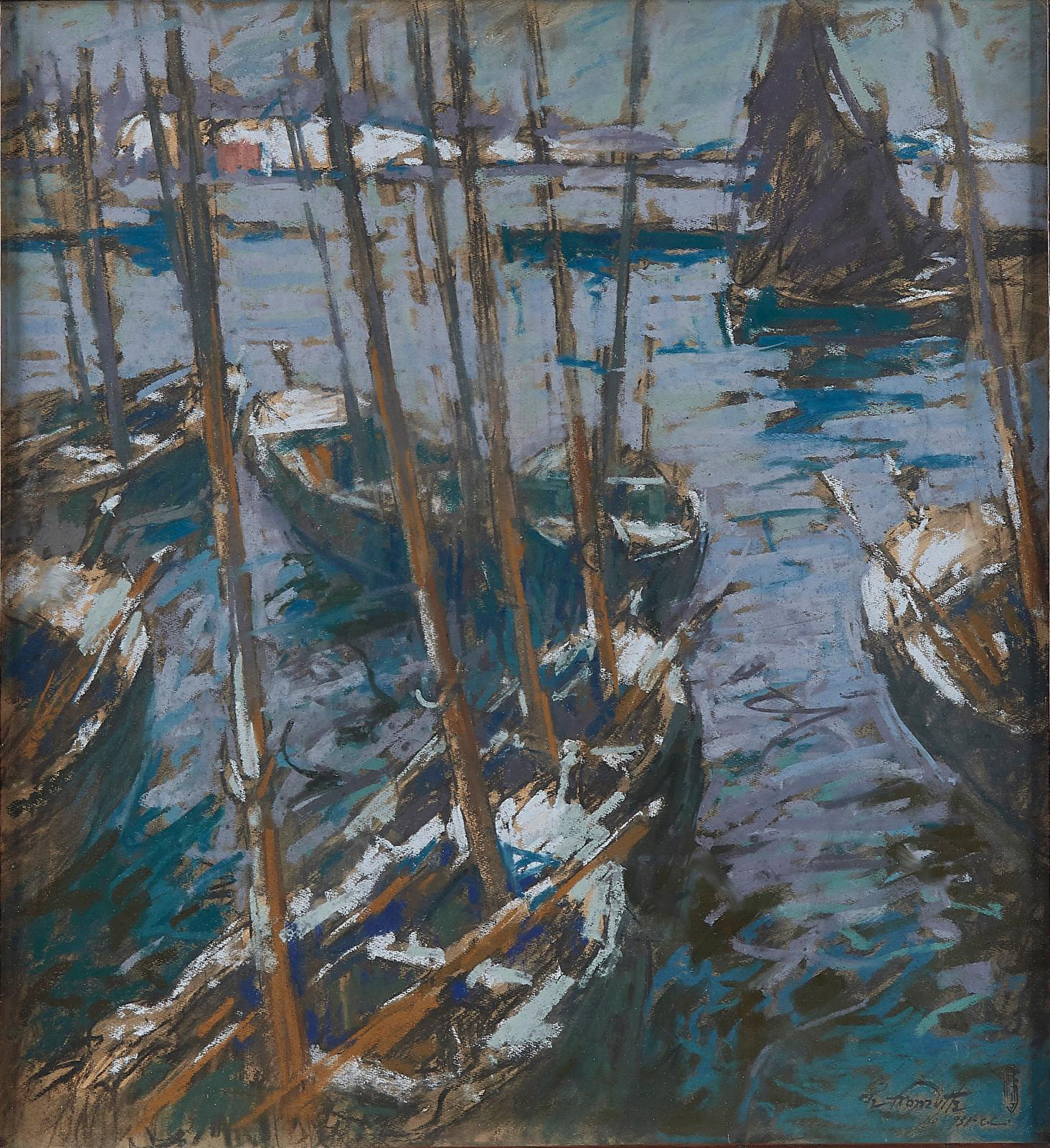 Estimated between €150 and €6,000, these views reveal not just the work of an artist entirely devoted to painting the sea and boats, but also his peculiar, ahead-of-its-time style. Charles Fromuth’s favorite medium was pastel, which he made himself, allowing him to create his own shades of color and very brisk, expressive drawings that render movement perfectly. The discovery of Japanese prints at the 1900 Exposition Universelle convinced him that he was on the right track; his taste for nature and perspective did the rest. Evening Rhapsodies in the Harbor, estimated at €2,000/3,000, and the impressive Winter Rhythm (€4,000/6,000) show how much his work stood apart from that of other seascape painters of the time, and perhaps also why he is only now gaining recognition. Fromuth studied with Thomas Eakins at the Philadelphia School of Fine Arts before discovering Europe and France in 1889. The following year he went to Brittany—more exactly, Pont-Aven and Concarneau, where he moved into the Hôtel de France and never left. He exhibited his works until 1910, but afterwards stopped seeking commercial success. The money his brother sent him and the sale of some paintings—views of the port filled with boats and heavily laden skies—were enough for this artist to lead his solitary life.

[VENTE MAINTENUE] Folk art, ceramics, paintings, furniture and objets d'art on the theme of Brittany
Brest - 13, rue Traverse - 29212
Adjug'Art
Info and sales conditions
Catalogue
Newsfeed
See all news
American Center for Art and Culture in Paris Will Remain Closed
Laurent Védrine Directs Documentary on Restitution and Colonialism
Rock-Cut Tombs Accidentally Discovered in Al-Hamidiyah Necropolis
Controversial Redevelopment Plan Threatens Major Delhi Art Institutions
Not to be missed
Pre-sale
Pierre Klossowski and André Gide: When Drawings Become…
Pierre Klossowski (1905-2001) is among the headliners at a modern…
Pre-sale
Love Through the Eyes of Boucher and Watteau
The top results of this classic sale could be posted in the early…
Pre-sale
Cartier's "Mystery Clock"
This monumental Art Deco timepiece in rock crystal, onyx and marble,…
Pre-sale
The Style of French Architect Charles Percier
One of Charles Percier's earliest drawings, which he made in Rome…