A new edited volume from Getty Publications examines a unique archive of visual material and ephemera related to the French colonial project. 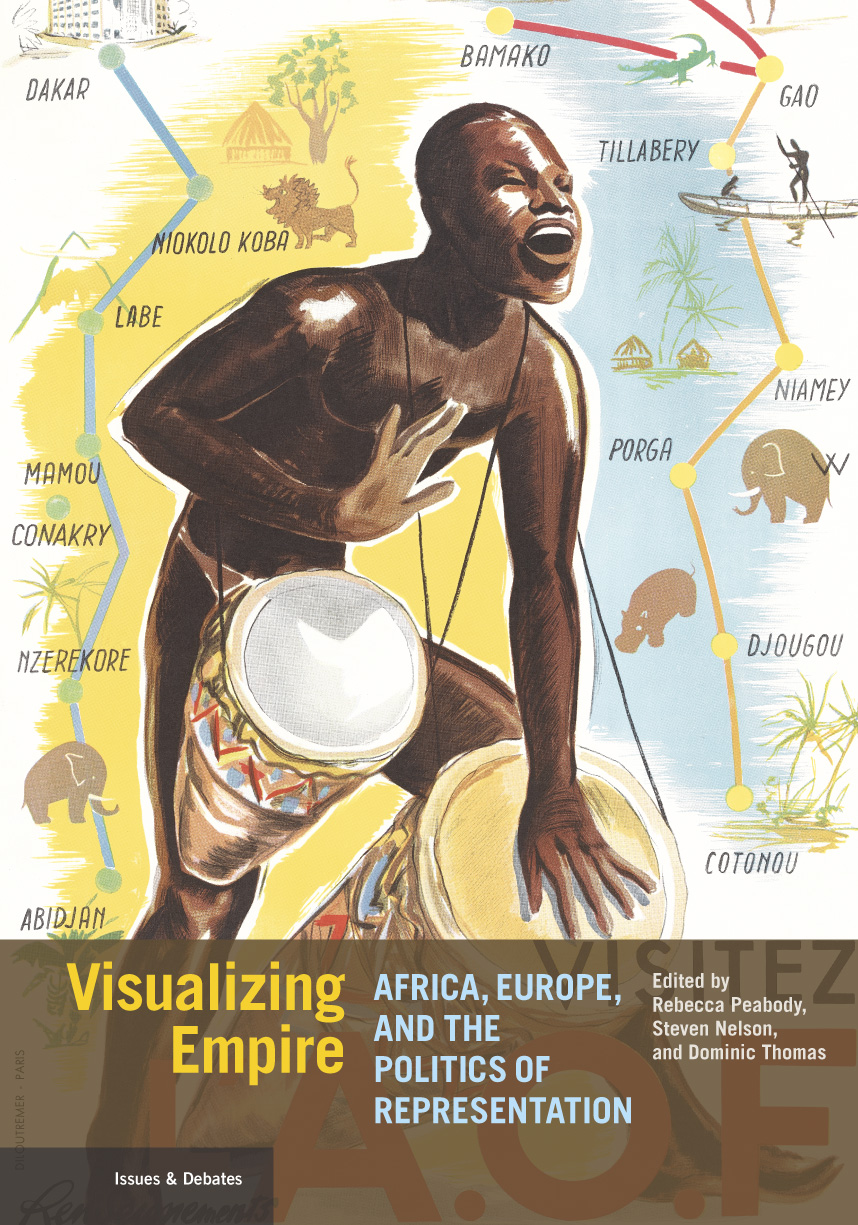 Visualizing Empire: Africa, Europe, and the Politics of Representation offers an engaging and often revelatory analysis of visual materials produced by the French government and commercial enterprises to promote France’s colonial project both at home and abroad. Edited by U.S.-based scholars Rebecca Peabody, Steven Nelson, and Dominic Thomas, the volume focuses on the archive of imperial ephemera purchased by the Getty Research Institute in 1997 from the Association Connaissance de l’Histoire de l’Afrique Contemporaine (Knowledge of the History of Contemporary Africa Association).

Active since 1989, ACHAC is a Paris-based interdisciplinary network of scholars founded by historian Pascal Blanchard, anthropobiologist Gilles Boëtsch, and historian and filmmaker Eric Deroo. The ACHAC research group is dedicated to promoting the study of colonial and postcolonial periods in Africa and Europe, as well as the history of immigration from the global South. In addition to assembling a vast archive of heterogeneous materials related to the French colonial empire, ACHAC has organized numerous events and exhibitions around the questions of race, iconography, and the colonial past. The members of the group have also spearheaded many important publications in the field of colonial and post-colonial studies, including Le Paris Asie (2004) edited by Blanchard and Deroo, Human Zoos: The Invention of the Savage (2011), edited by Blanchard, Boëtsch, and Nanette Jacomijn Snoep, and La France arabo-orientale (2013), edited by Blanchard, Naïma Yahi, Yvan Gastaut, and Nicolas Bancel.

The collection acquired from ACHAC by the Getty contains a rich variety of documents and media related to the nineteenth- and twentieth-century French empire. It includes photographs, albums, postcards, maps, posters, advertisements, children’s games, and other ephemera. Visualizing Empire is the product of close scholarly examination of the ACHAC archive and serves to promote the visibility of these materials among an anglophone public and the broader community of international scholars. The essays in the volume tackle diverse case studies such as ephemera from the 1931 Paris Exposition Coloniale Internationale, Le petit journal’s maps of France and its colonies, a group of board games created in 1941, photographs and postcards of the francophone Sahara assembled in travelers’ albums, and other examples of “everyday” colonialism in French visual and material culture.

The authors highlight the role of images in promoting the French colonial project and in justifying racial, political, and economic dominance in the countries that comprised its colonies. Conceptually complex and rich in illustrations, Visualizing Empire will interest scholars as well as the general public. The volume goes beyond standard historical narratives by drawing the reader’s attention to the ephemera of daily life - easily disposable and often unremarkable materials that nonetheless shape our concept of the world by impacting the realm of imagination and visual intelligence. Readers outside the French cultural context will be struck by the multidimensional and pervasive nature of colonial imagery and its nefarious workings within French society. For French audiences, the volume will offer a striking reminder of the national amnesia and cultural silence surrounding the colonial past and its continued legacy in contemporary France.

The Masters of Poster Art

The French Empire Is Still Celebrated
Newsfeed
See all news
Billionaire Collector Surrenders 180 Stolen Antiquities
World Record for Domenico Gnoli at Drouot
The Louvre Snaps Up Red-Figured Amphora from the Bellon Collection
Cécile Guettier Awarded Prix Villa Noailles des Révélations Emerige 2021
Not to be missed
Analyses
Dostoyevsky and Holbein at the Kunstmuseum in…
The Kunstmuseum in Basel looks back at the Russian literary icon's…
Analyses
Hélène Henry: Textiles in the Jazz Era
The Villa Noailles is dedicating a historical exhibition to this…
Analyses
An Appropriately Monumental Book for the Prodigious…
The publishing house Taschen has dedicated a book to the Italian…
Analyses
Cartier Explores the Art of Islam and Beyond
A new exhibition at the Musée des Arts Décoratifs (MAD) in Paris…