Collectors, prices, test pressings, labels and conventions: all you need to know about the vinyl record market. 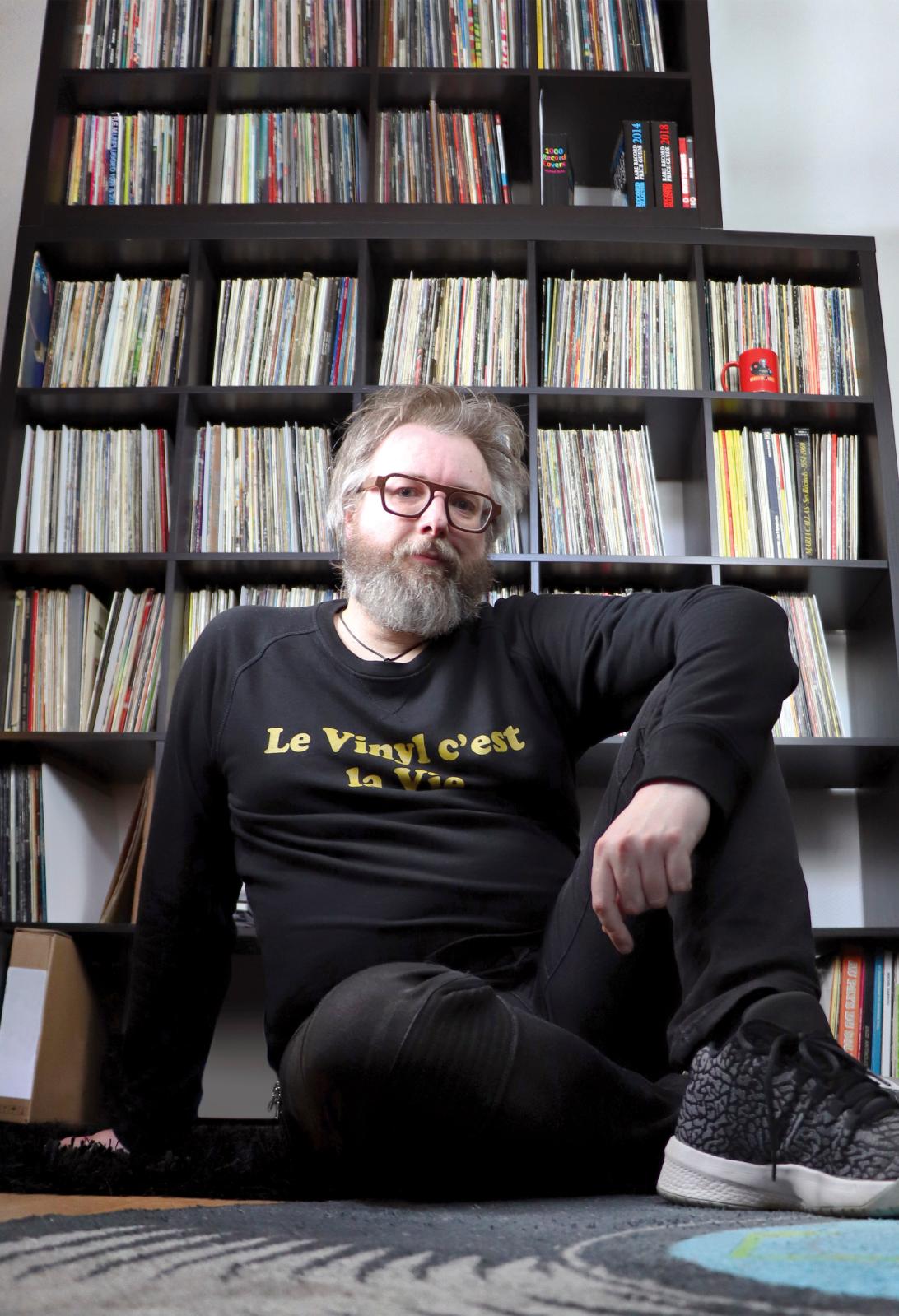 Are vinyl records making a comeback? The press has been talking about it for several years. A needle gliding across an ebony disc, bins full of musical treasures and record shop walls covered with colourful jackets are certainly more photogenic than real estate prices, executives’ salaries or freemasonry. The figures justify this media (over)exposure: 3.9 million vinyl records were sold in France in 2019, up from 1.8 million in 2016. Independent record shops have been reopening (300 in 2020, 50% more than 10 years ago) and a new generation of customers is rising: one-third of buyers are under 30. The coronavirus crisis will surely cause a sales slump in 2020, but the popularity of vinyl records will not be affected. Yet, despite the bright outlook, all is not well in the vinyl realm.
The first to benefit from vinyl’s comeback are the major record labels, which are re-releasing their back catalogues with strong marketing support. "There’s going to be talk about re-mastering, collectors, numbered editions and coloured vinyl records," says Monsieur Vinyle, a collector who runs one of the main YouTube channels devoted to this medium. "These terms will push the price of a double album up to €40 when it’s worth €15 less." The quality of the press is not always up to scratch if the record company did not use good source material—analogue tapes, original metal engravings, etc.—to make a double album. After many reissues, albums become a palimpsest that ends up turning off audiophiles. "Today collectors look for the sound source closest to the original master," says Monsieur Vinyle. “The Beatles' Sgt. Pepper's Lonely Hearts Club Band has been re-mastered so many times that the original sound has been completely lost. First presses are very important in the vinyl world." Speaking of the famous Sgt. Pepper's, one copy was bought for €250,000 in 2013—no surprise considering it was signed by each of the Fab Four!

Discogs, the Vinyl Nasdaq
The main vinyl marketplace is Discogs, a free, collaborative, online music database launched in Portland in 2000. At first, it served only to collect information about records. Within seven years, it had become a marketplace between individuals while remaining an archive, its original purpose. Over a million titles have been catalogued so far—and the mission is far from over. Vinyl records currently account for 43% of the website’s 289,922 items. Every month, the user community looks forward to the publication of the list of the most expensive albums sold on Discogs. In 2019, the top three were the complete works of Led Zeppelin (€5,812), a promotional vinyl of The Beatles' Love Me Do (€8,316) and a 2002 copy of Melody A.M. (€9,244) by the Norwegian duo Roÿksopp—among the 100 albums whose covers were stencilled by Banksy. These prices are still far below the record set in 2017: €23,816 for one of the last copies of Prince's Black Album (1987). Unsatisfied with the result, Prince asked his record company to pulp 500,000 copies. A smart employee saved five.

Record Sharks
Fabrice Desprez owns a collection of almost 13,000 vinyl records, with an emphasis on electronic music. The head of a music promotion and programming agency, he has spent enough time on Discogs to discover some funny business. For example, when influential DJs play an unknown title in their mixes, often broadcast live on the Internet, a race against time starts to identify the piece—and speculate. The price of a 45 rpm can climb from €2 to €250 overnight. "There are pro, semi-pro or even amateur sellers who raid stocks because then they have enough to exchange or credit to pay for the items they’re really interested in. It’s pure trading," says Mr. Desprez. Over the years, he has also come across various market manipulation methods. One label represses limited editions on the sly and sells them for a high price through an anonymous account; another quietly re-releases a title and passes it off as an original, claiming it was found in an old cardboard box; a user creates several accounts to sell himself a title with the aim of artificially pumping up its price; YouTubers with a well-established reputation post a video on an obscure nugget, immediately creating demand, having previously bought up the few available copies. Despite these fishy practices, the marketplace is still an indispensable tool. "Discogs has corrected many shady dealings,” says Mr. Desprez. “The prices of some records collapsed because people realised that everybody owned them!"
A test pressing is a technical record, which can exist in several copies, used only to check the quality of the vinyl’s duplication. Little sought-after by electronic music collectors, it is particularly coveted in the case of important works from the history of rock music, like the first album by The Velvet Underground & Nico, estimated at over €22,000, of which some titles are not on the final version. After its release was cancelled, there were only 10 test pressings of electronic music producer Aphex Twin’s album Caustic Window, including six that were kept by the artist. One fetched €41,000 on eBay. Realising how popular this industrial object is, the major labels were poised for an ambush. "Four or five years ago,” says Monsieur Vinyle, “I started seeing sales of test pressings appear at the same time as sales of vinyl that had just come out. And people rushed to buy them! Test pressings have become a new commercial excuse to sell 'even more collectors’ items than collectors’."

The Collector’s Mecca
However, Discogs and the Internet have not killed off fairs and conventions. The world’s biggest vinyl fair, the Mega Record & CD Fair, takes place twice a year in April and November in Utrecht, the Netherlands. During the three-day autumn edition, nearly 35,000 crate diggers scoured 600 stands from around 60 countries. There are an average of 3,000 records per stand and some good deals. "The prices in Utrecht aren’t too high compared to what you see in France,” says Monsieur Vinyle. “For example, you’ve got original pressings at €150 or €200 that can be found online for €400 or €500." But prices can swiftly soar. During the 2017 fair, an original pressing of the Sex Pistols’ single God Save The Queen (1977) was auctioned off for €3,500. A quite familiar object is increasingly cropping up at some stands: cassette tapes. Hit series and movies (Stranger Things, Guardians of the Galaxy) and certain artists (Jean-Michel Jarre, Eminem) have restored their popularity. They are experiencing renewed interest and sales have increased in recent years. Will cassettes be as successful as vinyl? If in doubt, don’t throw them out!

Art Market Overview: The Rise of Urban Art
Newsfeed
See all news
Prices Are Up for Painter Robert Colescott
Istanbul Biennial Postponed Until 2022
Kunstmuseum Bern Shows North and South Korean Art
London’s Serpentine Pavilion Criticized for Environmental Impact
Not to be missed
Market Trends
Art Market Overview: Rising Prices for Paintings by American…
Twelve years after his death, the price index for works by the American…
Market Trends
Did Leonardo da Vinci Paint Salvator Mundi? The Louvre…
La Gazette has obtained a copy of the Louvre’s scientific paper…
Market Trends
Art Market Overview: a New Record for Chu Teh-Chun
Chu Teh-Chun is now seventh in the Artprice 2021 rankings, just…
Market Trends
Parisian Artistic Life with a Touch of the Bosphorus
While Turkish collectors were the first to revive interest in artists…